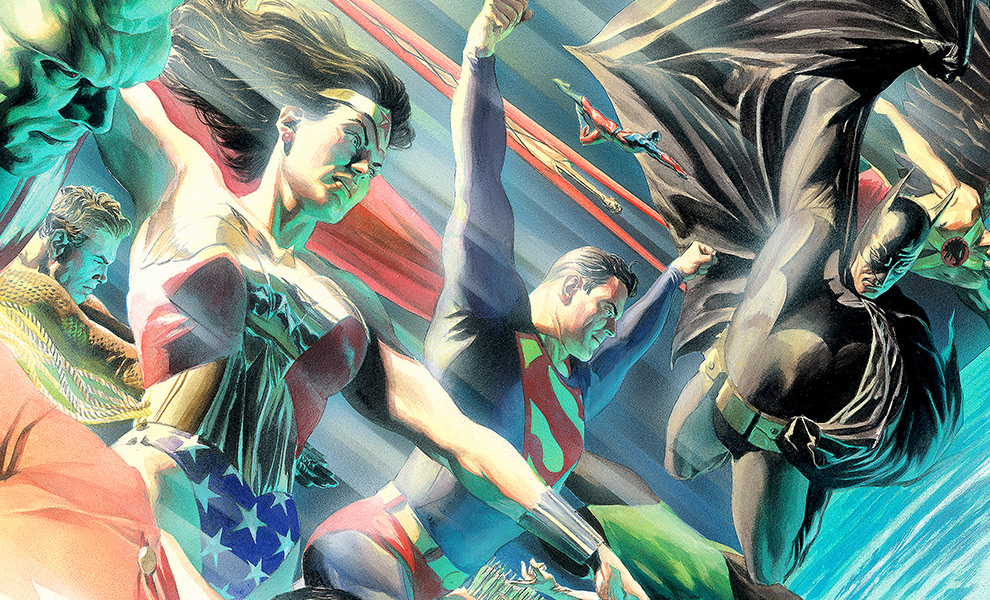 Sideshow Collectibles has announced their latest offering from Alex Ross Art, which features the Justice League in a piece called “Protectors of the Universe”. The print measures eighteen by twenty-four inches unframed and twenty-two by twenty-eight inches framed. It is available in a limited run of 250 and will be hand-signed artist Alex Ross. The print starts at $150 and goes up from there depending on the frame options. It is expected to ship between December 2020 and January 2021. You can preorder the print over at Sideshow Collectibles. “They are beings of great power and greater commitment, working miracles for all mankind. And sheltering us when the sky is falling.”

Ross’ hyper-realistic rendering of the Justice League is as radiant as the glimmering sunbeams behind them in this detailed DC Comics composition. The fearless heroes rocket through outer space towards Earth’s surface, ready to stand for its people and defend the world from evil. The Protectors of the Universe Fine Art Lithograph features fourteen iconic members of the Justice League including the Flash, SHAZAM!, Martian Manhunter, Wonder Woman, Superman, Aquaman, Green Lantern, Green Arrow, Black Canary, Hawkgirl, Plastic Man, the Atom, Batman, and Hawkman.

Originally created as a cover illustration for Absolute Justice League: The World’s Greatest Super-Heroes, written by Paul Dini for DC Comics in 2002, this fine art lithograph has been specially reproduced in a limited edition of 250 pieces. Each Protectors of the Universe Fine Art Lithograph is hand-signed by Alex Ross and includes a Certificate of Authenticity.

The Justice League will protect your DC Comics collection when you bring home the Protectors of the Universe Fine Art Lithograph by Alex Ross.