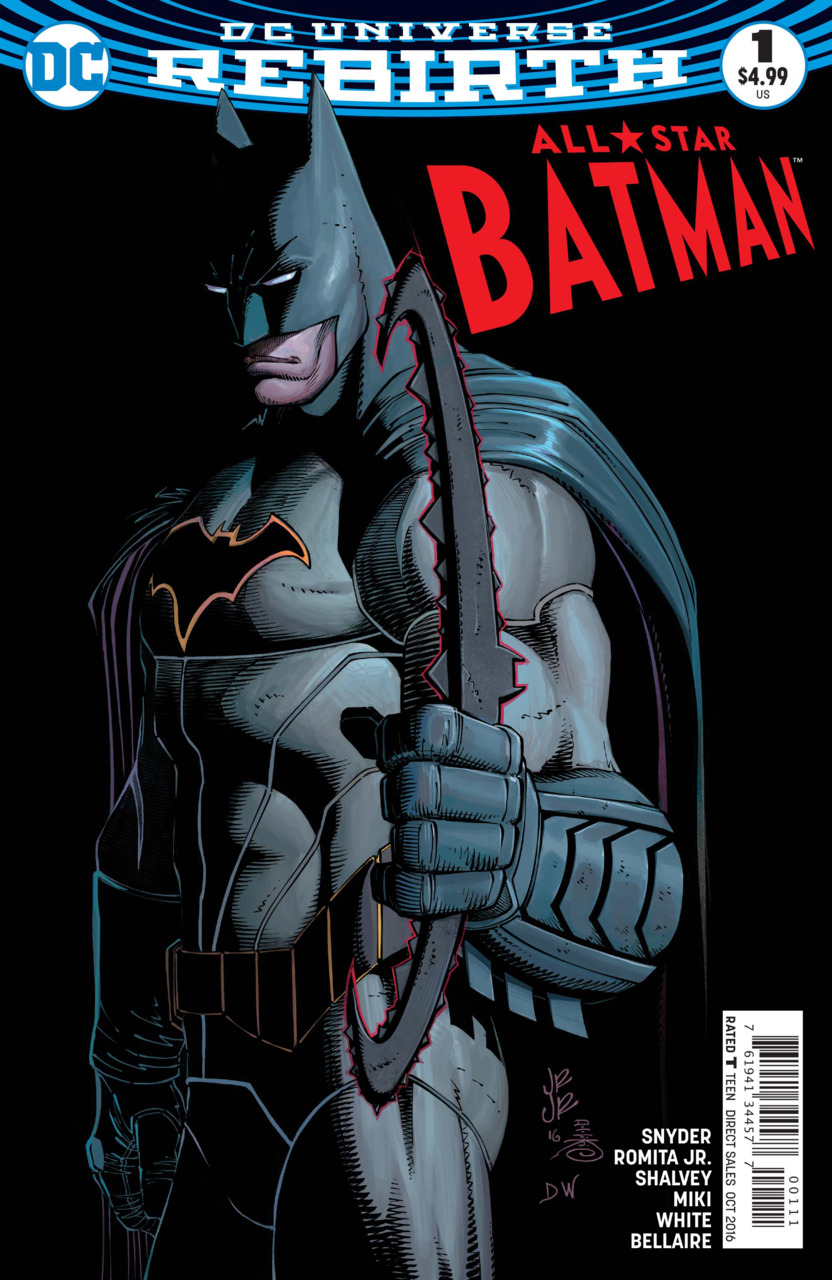 Synopsis: (For the sake of lessening the confusion, this synopsis will be in chronological order) Two weeks ago: Harvey Dent sends Bruce an encrypted message on a coin, telling him that Two-Face is gaining more control. He is worried about what is going to happen, and asks Bruce to take him to a particular house that will burn Two-Face out of him. Alfred is unsure as to whether this is truly from Dent, or if Two-Face is playing at some game.

Two hours ago: We see the fallout of an attack that Two-Face has thrown on Gotham City. Some time has passed, as we see Commissioner Gordon sporting a full beard, Duke is wearing a Yellow Ranger suit and has his arm in a sling, and Gotham City is RAINING ACID!!! With the help of Cobblepot, White, and Sionis, Batman and the GCPD was able to capture Dent. Batman pulls out the coin that Harvey gave him, and he throws it off the roof.

22 minutes ago: Batman is piloting the Batwing with Two-Face in the passenger seat. He is cuffed, and has a bag over his head. He says that he knows that Batman threw the coin away, and says that someone else will find it.

20 minutes ago: Harvey reveals that he’s been collecting secrets and dirt on everyone. And he’s going to give everyone the opportunity to show their true colors. A broadcast is being sent out, with Two-Face is making a deal with everyone in the Gotham area. If Batman gets Harvey to the house, everyone’s deepest, darkest secrets will be released to the public… But if Batman dies and Harvey is set free, they will be rewarded with millions of untraceable dollars. Just then, Alfred informs Batman that a missile is locked onto the Batwing, and that he should brace for impact…

Now: An unconscious Batman is thrown into a a diner in a rural area just outside of Gotham by Firefly and Killer Moth. The bugs have teamed up to find Two-Face and need Batman to tell him where he is before they kill him. To give him some incentive, they threaten the lives of everyone in the diner. Batman uses his cape to smother the flame-thrower on Firefly’s arm. He takes out both of them, but just when things start to cool down, some Dr. Octopus-like arms reach through the window, and pull Batman through. Batman crashes through the fence near some hay sculptures in a hay field. Black Spider shoots the crumpled body repeatedly, only to realize that it’s a sculpture. He hears the sound of a chainsaw, only to find Batman standing over him with one in his hand. Firefly has recovered, and stumbles through the hay field, only to find a chainsaw wielding Batman, who has removed the added mechanical arms with said chainsaw… He does what any of us would have done — turns around and runs. Batman makes his way over to the Batwing, opens it up, but finds only the bag that covered Two-Face’s… well, face. The people from the diner thank Batman for saving them earlier, and then pull weapons out, surrounding him. Two-Face shows up, and just as Batman approaches him, he is shot from behind, and goes down. Two-Face goes up to congratulate the man who pulled the trigger, when Two-Face is pulled down, and disappears in the tall grass. Batman chains him up inside the cargo container of a semi. Batman contacts Alfred, saying whoever shot them down in the Batwing must have hacked into their coms. In order to continue, he’ll have to go dark, and he signs off. Batman throws the coin out the window — again. And Gentleman Ghost hitches a ride on the back of the semi.

Alfred, with tears in his eyes, says; “I’m so sorry. I had to do it.” as we see that the Batcomputer has a target on a downed Batwing with the caption: TARGET DESTROYED.

Script: Scott Snyder’s main story was a blast. It was a 100% action movie on the comic page. This story is probably the most straight forward concept that Snyder has had for a story idea, but it’s so beautiful in it’s simplicity. My only problem with it was his jumping back and forth with the timeline. It kinda jumbled things up, and made it more difficult to follow.

Pencils: John Romita Jr. kills it. His storytelling is top notch and easy to follow. I love his old school style of art. It’s not the prettiest art you’ll ever see, but it’ll be hard to find someone who is better at his craft. I also love the pairing of someone who’s been in the business so long like Romita, with Snyder who is still fairly new…? Can we still say that?… Anyway, Romita makes this feel like the action movie it really is, even having the freeze-frame moment with a caption to tell you who these characters are, and their current status.

Inks, Colors, and Letters: Danny Miki returns to inking Batman, and while I still think that I prefer Klaus Johnson on Romita, Miki does a great job here. He keeps things simple, which adds to the art. Now when you pair that with Dean White’s colors, you get another dimension in the art. White uses a beautiful color set that adds texture to the page. sometimes it looks like it was painted onto the page with a brush (ex. – the beautiful backdrop of the sky in the background), and other times, it looks like his using two or three variations of a colored pencil, adding an interesting texture to surfaces. Steve Wands shows off here with his lettering. The caption boxes for the freeze-frames were perfect, the sound effects, everything was on point.

Backup Story: I know it’s only the first chapter of a few page story, but Snyder’s script felt pretty weak. I don’t see why this story was even here in the first place, but maybe it will become more clear as the story continues. Declan Shalvey’s art is beautiful as always. His pencils are very tight, and ink lines are thin. Jordie Bellaire gets to use every color in her palate in this chapter, and I know that played an important part in the story, but it was a bit of an overload of colors, to the point where it was leering the eye away from what was happening on the page. Just overall, this part was a bit disappointing, but hopefully that’ll turn over into a positive.

Closing Thoughts: We get off to a great start to this new story. A not-so-great backup story knocked the rating down for me, but the main story was great despite the pacing issues.

Recommendation: Buy… all of you. If you are looking for a new comic series to jump into, but don’t know where to start, start here. It’s a great option for new readers. If you didn’t like Snyder’s past work, this is so much different, that you’ll most likely love it. If you did enjoy Snyder’s past work, I think you’ll still love this… It’s a Batman/Two-Face Mad Max style road-trip with lower tier villains… HOW COULD YOU NOT LIKE THIS?!