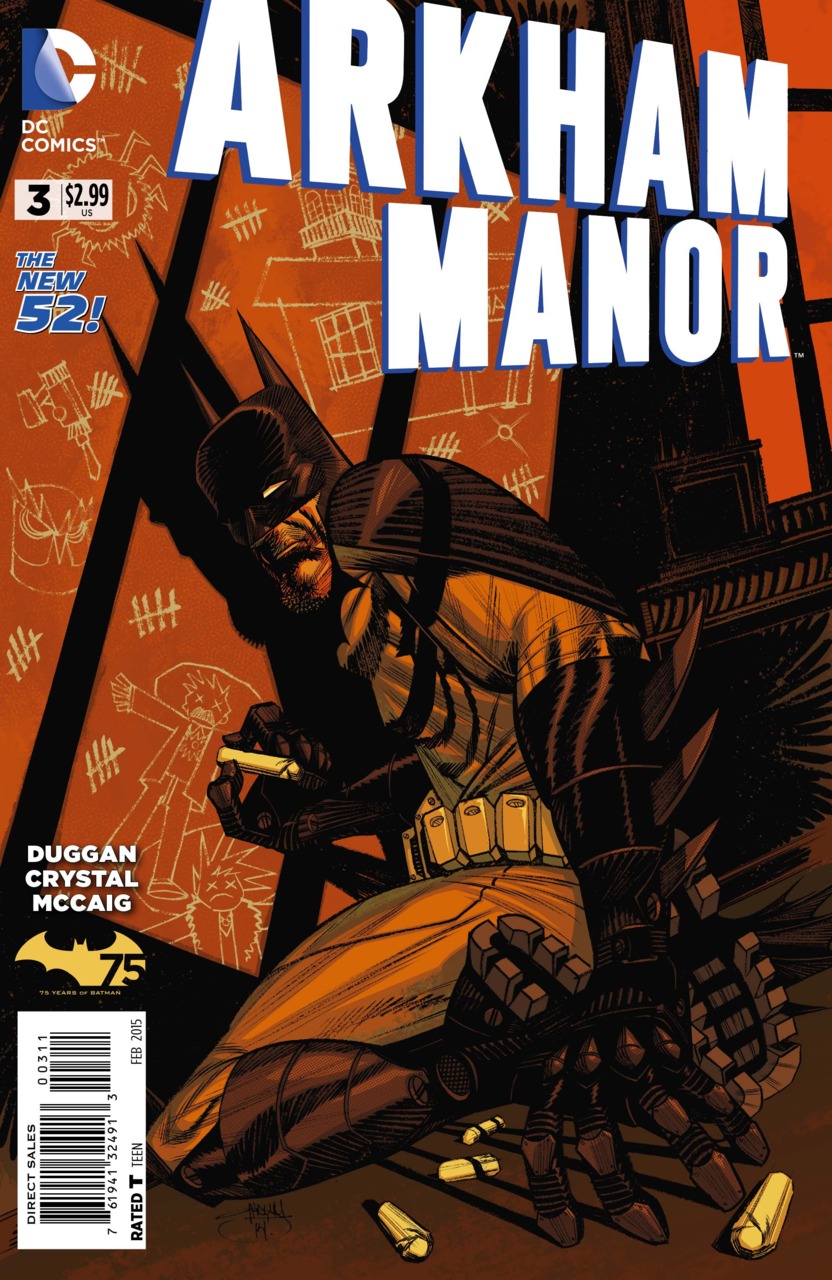 I expressed some concern about the future of Arkham Manor in my last review. Mainly, how could it continue as an ongoing series after Wayne Manor is restored? Well it looks like I’ll be getting an answer to that question sooner than later. It was revealed that Arkham Manor will be ending at issue #6. So we are now unexpectedly at the halfway point which opens up a whole new line of concerns. Chief among them is whether Duggan and Crystal resolve a story that seemed like it was just starting to get off the ground? If issue #3 is any indication the answer to that is “abso-freaking-lutely.”

For the first two issues it seemed to me like this book could sort of be enjoyed as an outlier. Not essential necessarily to the ongoing narratives of Batman and Batman Eternal but it could function as a nice little side book. The events in issue #3 make this title a must read and serve as an essential prequel to Batman #36.

The book opens with Bruce, as Jack Shaw, being treated for the concussion that he suffered at the end of the previous issue. Bruce knocks out the doctor treating him and steals his orderly uniform and keys so he can maneuver around Arkham Manor undetected. When investigating last nights crime scene he finds himself Bruce discovers that the murderer has been maneuvering through the ventilation systems and framing of the old Wayne Manor. As Bruce gets deeper into the old bones of Arkham Manor it becomes evident that Bruce has his work cut out for him and that he might not be dealing with the familiar foe that he initially thought.

Elsewhere the Eric Border stuff that left me scratching my head in early issues comes to ahead. Border finally reaches the breaking point and we get to see the moment that the Joker is done playing dress up. The creepy wheelchair bound old man is also worked into this angle in a way that was completely surprising and unexpected. It’s great to see all of these gaps starting to get filled in in a way that doesn’t feel forced or rushed.

I have to commend Shawn Crystal, who seems to get better and better with every issues. The pages of Bruce working through the framing of the house are expertly paced and create maximum tension that builds with every panel. It pays off beautifully in what is one of the most chilling images I’ve seen in a Batman book.

Some Stray Observations:
●    The fact that Batman and the Joker are both in disguise and living under the same roof is just absolutely crazy…in a good way.
●    Mr. Freeze is in one scene in this book and it’s actually pretty funny.
●    I’m curious to see how the Seth Wickham’s escape factors into this.
●    I really hope they find a bat book for Duggan and Crystal to work on after this. Losing them would be absolute garbage.