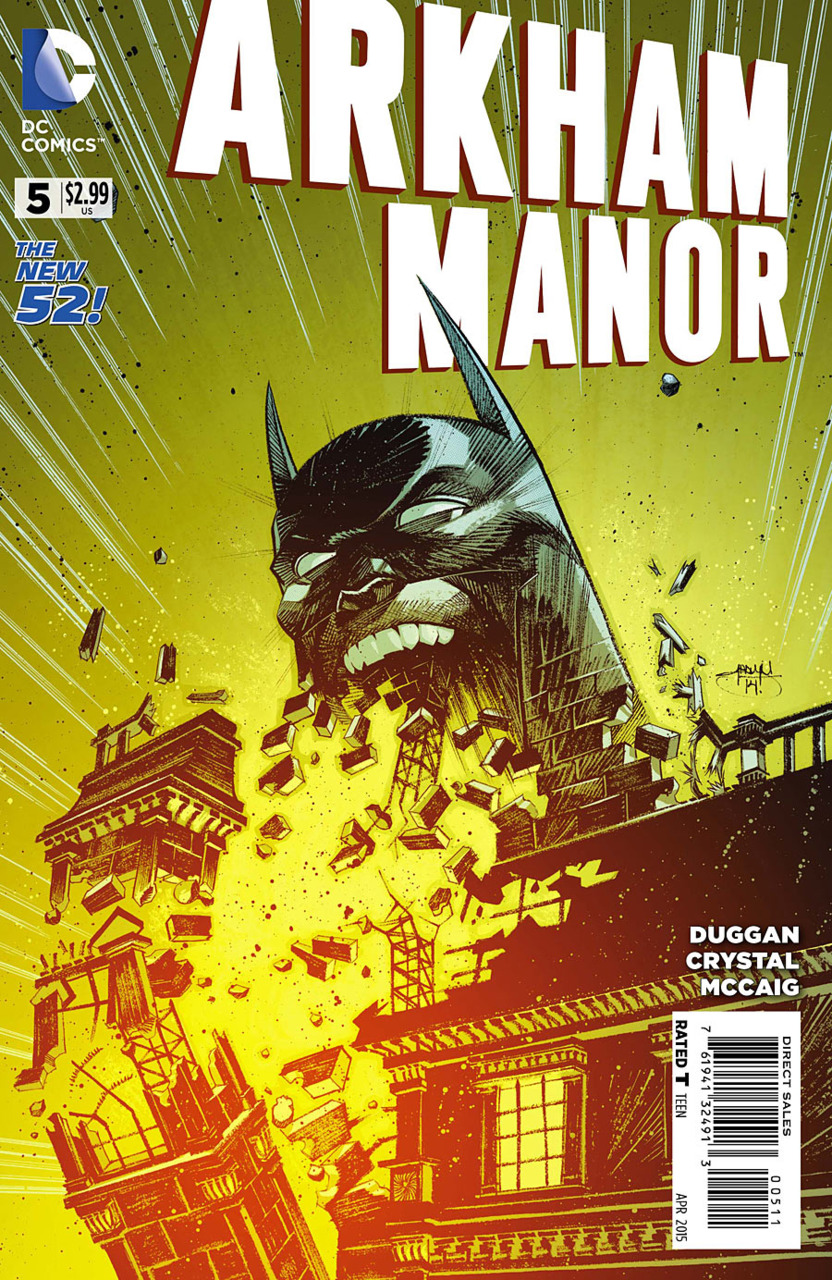 Let’s just lay this right out on front street. If you’re looking for a big shocking reveal in Arkham Manor #5 you should probably look elsewhere. The big bad that was lurking in the walls in Arkham Manor and killing inmates is revealed to be a nobody. Just some guy with a big beard and a mining helmet. It should be a hugely disappointing revelation. This has been the central mystery of Arkham Manor since it’s first issue. It was a situation that was presented as being so dire that Batman had to disguise himself as Jack Shaw for three issues instead of just going in as Batman and busting heads. Like I said this reveal should be disappointing, but surprisingly it’s not.

The big showdown between Batman and the big bad that we were promised in issue four delivers in a big way. Artist Shawn Crystal paces the fight scene perfectly using clever layouts and expert shadowing that enhance the dynamic action that makes up a majority of the issue. Writer Gerry Duggan makes a wise decision by not cluttering Crystal’s pages with speech balloons and caption boxes, instead he uses his dialogue sparingly which only amplifies some pretty killer one-liners.

Duggan does some good writing in this issue. Arkham Manor has proved that he gets Batman better than many other writers but what Duggan has really excelled at in this series is creating great moments for villains. Nowhere has this been more evident than with Mr. Freeze, who’s characterization at the beginning of this series was so dramatically different from anything that we had seen in any previous iterations of the character that I initially rebelled against it. I’ve come to love this Mr. Freeze. Duggan has proved that even though his name is Mr. Freeze his personality doesn’t always have to be so…uhh..chilly.

So now we have one issue of Arkham Manor left. Duggan and Crystal have tied up all of the loose ends except for one and that’s Seth Wickham, the character institutionalized in issue two. The grisly cliffhanger at the end of this issue has me excited to see how Duggan and Crystal will wrap the series up. If this issue is a good measuring stick even if the resolution doesn’t completely work at least Duggan and Crystal  will make it fun to read.