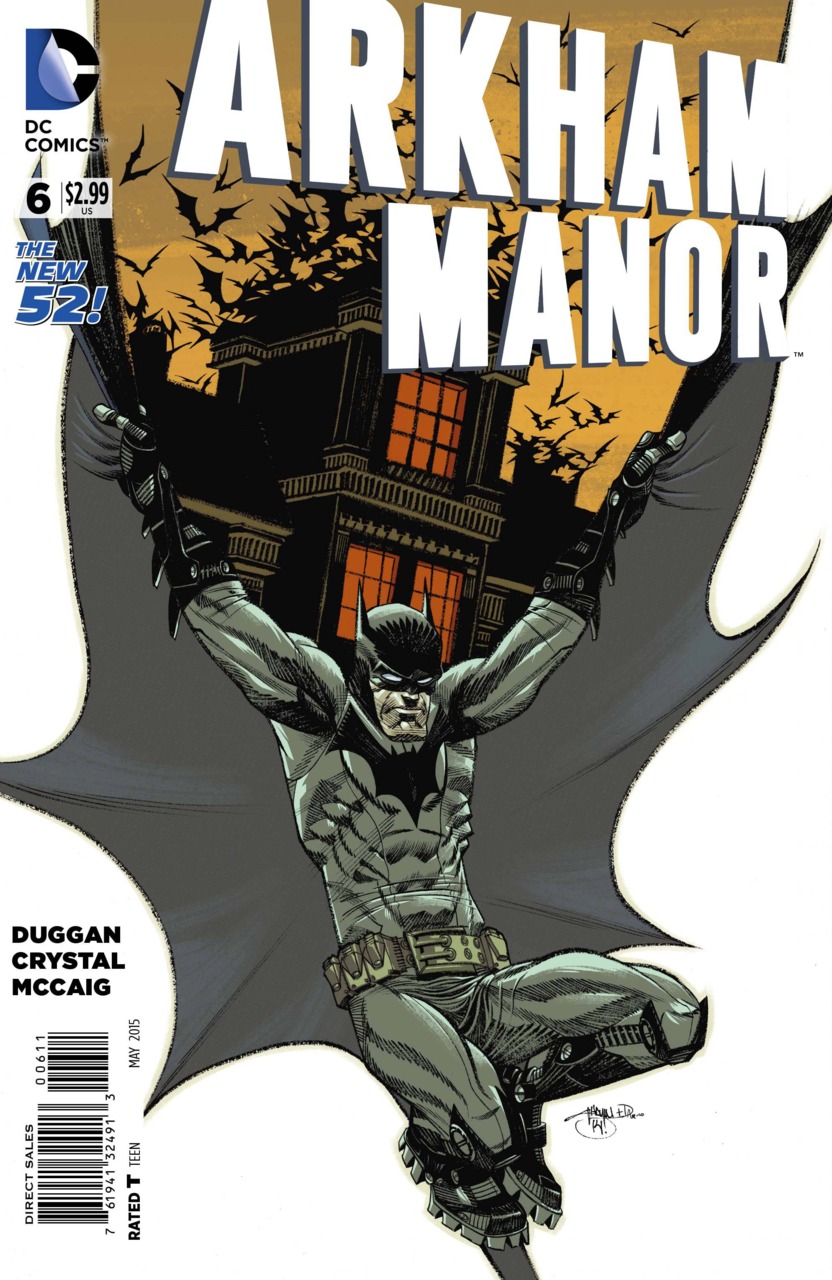 Arkham Manor #6 deals almost exclusively with the apprehension of escaped patient and diagnosed schizophrenic Seth Wickham. Batman, after failing to stop the murder of Wickham’s parents, tracks Wickham to a Gotham City High School where he is tormenting and about to kill the school’s janitor. Batman stops Wickham which is to be expected but writer Gerry Duggan and artist Shawn Crystal do some solid but not particularly subtle character work. In issue one of Arkham Manor we saw Batman savagely beat a criminal. It was pretty merciless and frankly kind of disturbing. In issue six we see Batman doing a complete 180. Wickham has just killed his own parents and Batman is very sympathetic to him. Batman recognizes Wickham’s sickness and is able to adjust his tactics in apprehending him appropriately.

This moment is good but doesn’t completely work. When the series began mental health seemed like it could have been a major theme in the book and Seth Wickham’s character seemed like the natural conduit to explore that theme. Unfortunately we didn’t really get enough Wickham for those moments to really hit the right notes emotionally and exploring this topic at the end of the series makes it seem like the creators are just trying to shoehorn it into the story to add some sort of social relevance to the title at the last minute. Frankly, it’s disappointing especially when you consider Wickham vowing to get revenge on Batman at the end of the issue. Are they really setting up Wickham to be an ongoing villain for Batman? Let’s hope not.

Shawn Crystal’s art in this issue is great and even if Arkham Manor #6 is missing some of the tense pacing that I applauded in earlier issues it still has some wonderful splash pages and a really exceptional panel drawn from Seth Wickham’s perspective. It’s creepy and shocking and I loved it.

Duggan ties up many of the book’s loose threads but can’t resist from asking just a few more questions right at the end. It will be interesting to see if any of these questions are answered in Arkham Manor: Endgame or in another future bat-book.

Despite some minor gripes with Arkham Manor #6  this issue and series overall was pretty satisfying. Even with the book missed the mark with some of it’s big pay offs the book still managed to excel at the smaller stuff. This a book that had great character moments and in the end that’s what I as a reader tend to remember the most.