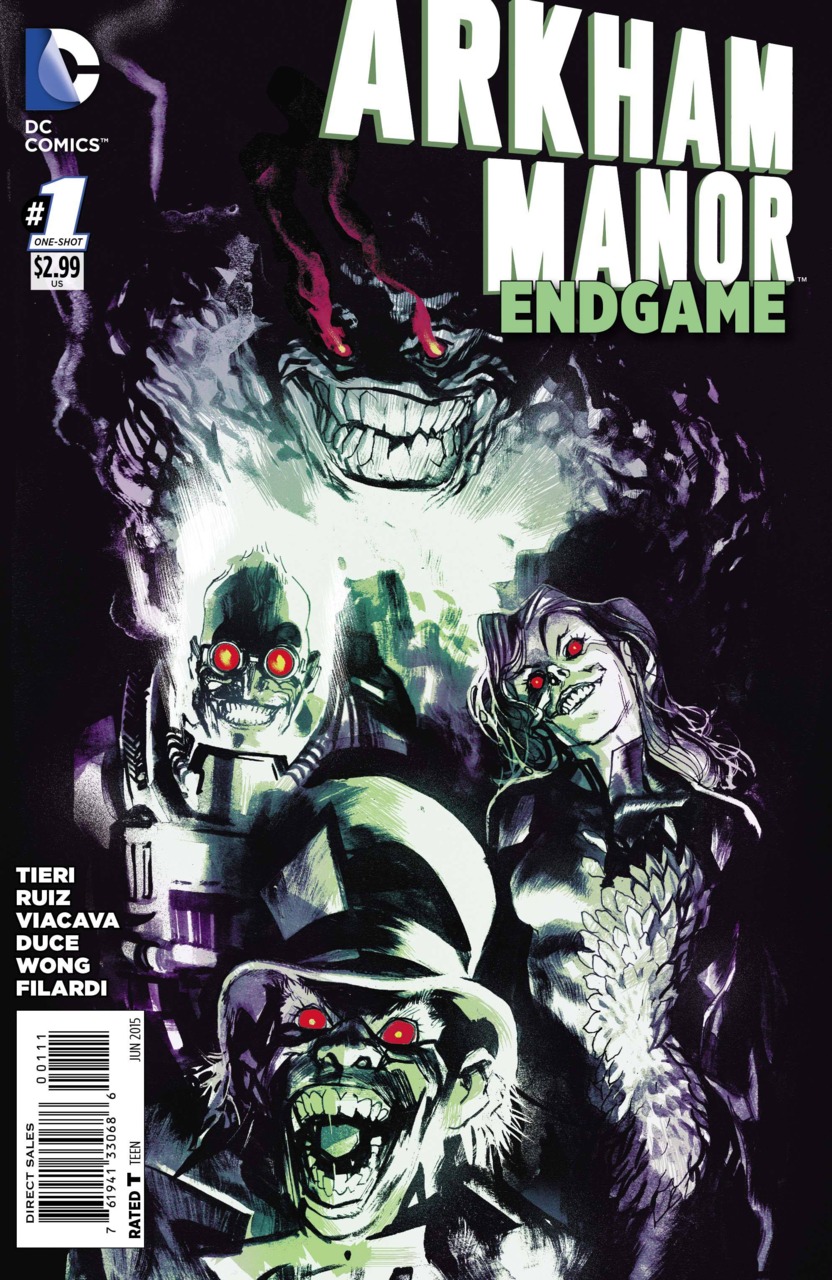 We all know that the event tie in comic is a cash grab. They never really offer anything to the event or the arcs in their own books. But when Arkham Manor: Endgame came out I will admit that, against my better judgement, I was excited. I enjoyed Arkham Manor, overall it was a solid fun book but it’s conclusion in issue six left a lot of unanswered questions. Arkham Manor: Endgame seemed like the perfect opportunity to address some of those questions. That’s what I wanted. And I should have known better.

The tie-in opens with a reformed Penguin goon turned Arkham Manor security guard Stone being interrogated by Harvey Bullock about a Joker induced riot that lead to the escape of Bane, Mr. Freeze, Poison Ivy, Scarecrow, and Clayface. We will ignore the fact that Bullock interrogating a security guard while Gotham City is being torn apart by Jokerized citizens, which is an all hands on deck situation if I’ve ever heard one, but I digress. What follows is a riot which results in several Arkham guards being brutally killed and most of the inmates are infected with Joker toxin.

This issue is written by Rob Liefeld’s New 52 Grifter and Savage Hawkman co-writer Frank Tieri. To say that Tieri is the sole problem with Arkham Manor: Endgame seems unfair but it’s difficult to find anything redeeming about his writing here. The scripting in this issue is very bad. The dialogue is forced and plotting is too convenient and I question whether Tieri was actually familiar with the event’s of Arkham Manor as he was writing this. This is where I wish editorial would have stepped in. Did they not catch any of these inconsistencies or did they just not care?

The art is the best part of this issue without question. Felix Ruiz, Roberto Viacava, Walden Wong, and Christian Duce take over for Shawn Crystal. Despite being drawn by four artists the art flows pretty consistently without taking the reader out of the story too much. There are some problematic character renderings that seem a little off model (Zsasz has never been this jacked not even in previous Arkham Manor issues). Another issue here is with the design of Arkham Manor itself. Arkham Manor is still supposed to be recognizable as Wayne Manor and in Arkham Manor proper the art reflected that. Here Arkham Manor looks like Arkham Asylum maybe this is purposeful to show how time has passed and how Arkham Manor has evolved since the ending of issue six but based on the books shaky knowledge of Arkham Manor’s continuity I can’t really give them the benefit of the doubt.

Tieri does look to resolve one question left by Arkham Manor proper. I don’t really want to spoil it here but that’s not because I’m concerned with spoilers. No, the twist at the end of this book is so out of left field and so dumb you simply would not believe me if I told you. If I wasn’t reading this issue on an iPad I probably would have chucked this issue right in the trash.

It’s sad to see Arkham Manor end in this way and it’s a shame that any collected editions of Arkham Manor will feature this issue purely out of obligation and while this single issue doesn’t completely derail the enjoyment of Arkham Manor the fact that Arkham Manor: Endgame tries to resolve one of Arkham Manor’s major plot points and fails miserably certainly doesn’t help it.