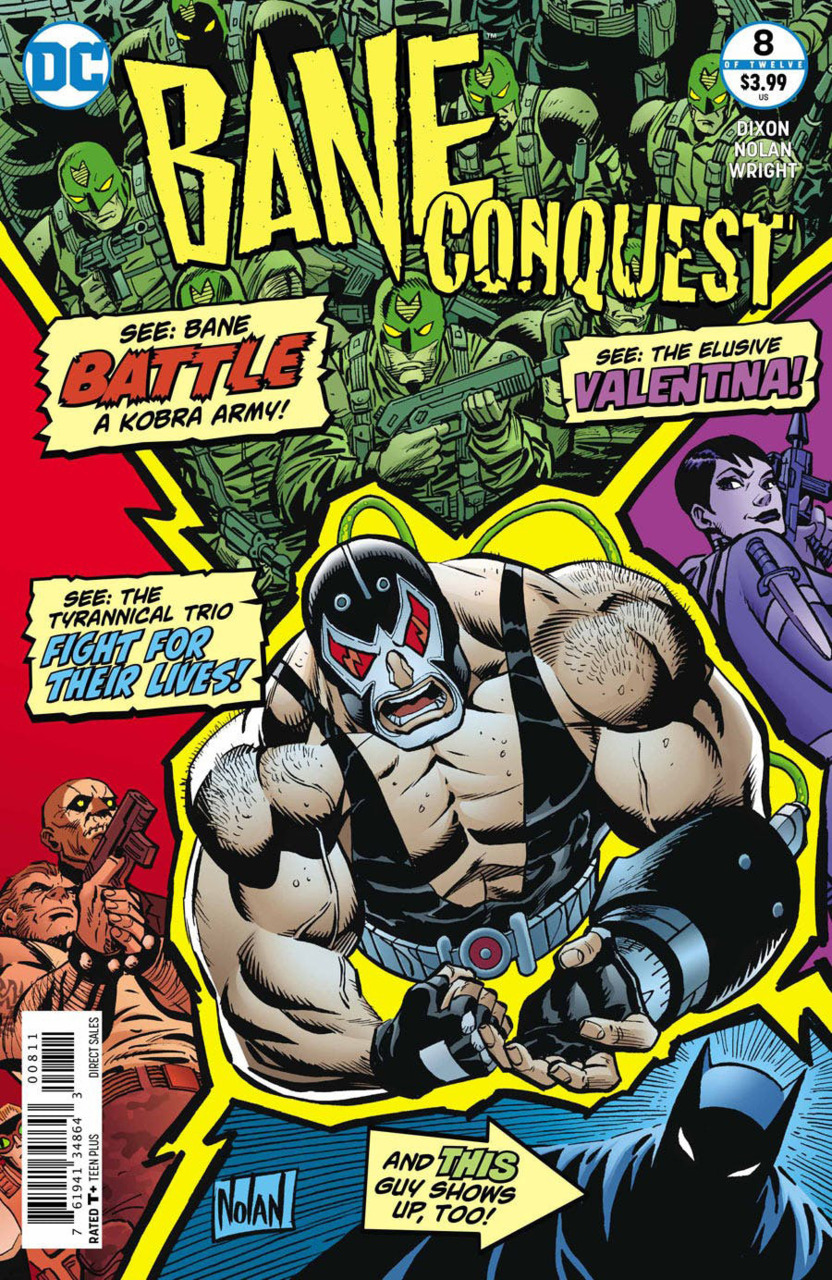 Overview: After the Naja-Naja escapes Bane’s grasp in the arms of the Kobra soldier Valentina, Bane must face the reality that his underground network of illegal businesses is being destroyed by the forces of Kobra.

Synopsis (spoilers ahead): As seen last issue, the infant Naja-Naja is taken by Valentina from the hands of Bane, who desperately tries to get the child back, while his henchman attempt a spectacular seize and reduce by driving their van onto the hull of the escaping Kobra craft. Although this causes some merriment among the Kobra goons, they aren’t laughing so hard as Trogg then blows the van up! Unfortunately for Bane, all their efforts are in vain and the slippery Valentina escapes in a motorcycle holding onto the child, Bane’s machine gun firing in vain behind her.

Back at Kobra home-base, one of the head honchos tells Valentina that in this time of crisis, where the heads of the Kobra order will wage against each other for control in the absence of an adult leader, he wants her to mind the child Naja-Naja. Valentina, ever resourceful, then suggests refocusing the attitude of the Kobra cult externally against Bane himself to help prevent the infighting.

Quickly we see the effects of this idea being implemented as Kobra forces led by Valentina seize drug shipments and cash held by gangs loyal to Bane after he constructed his web of criminal enterprises. A single henchman is spared after one cache of money and drugs is seized – left alive only to tell Bane that Kobra is working against him. Valentina removes the man’s eyes but leaves his tongue.

Meanwhile Bane, finding his options becoming limited and his financial resources dwindling with the Kobra seizures, has to attempt to raise the shattered morale of his injured and beaten-up troops. While Dionysus preaches his particular brand of gloomy strategy, Bane decides he needs more than a gang to fight this war – he needs an army and a general.

In Gotham, Batman is shown working out the deeper meanings behind global gang on gang violence, and he anticipates it will eventually come to Gotham, which has of course seen it’s share of gang violence in the past. He tells Alfred to prep for an overseas vacation.

Meanwhile Bane travels to Russia and enlists the aid of a washed-up old comrade, Anatoli Knyazev, otherwise known as the KGB Beast. Perhaps Bane has found his general after all.

Analysis: What strikes the reader first off in this issue is the excellent art by Graham Nolan which feeds well off the satisfying and entertaining tale told by Chuck Dixon who remains in masterful control of this story. The stakes remain tense and we constantly find ourselves rooting for Bane even though we know we probably shouldn’t. The colorization of Valentina and the Kobra stooges is pitch perfect – vivid greens make the images dance.

Deep into this Bane: Conquest saga, instead of boredom or staleness, the feeling is that we are exploring this Bane mini-universe through an exciting portal that the Batman Universe has rarely offered. There are various ways to “do” the Bane character and his crew, but this is probably the most successful attempt since Knightfall to make these characters breathe and come alive as more than just foils for Batman to encounter. Reading this series gives great insight into what not only makes Bane tick, but also his comrades-in-arms, as well as providing an excellent glimpse into the murky world of the Kobra cult. And meanwhile, what an awesome cover!

Final Thoughts: Bane: Conquest remains one of the gems in the current DC catalog – it is delivering an excellent action story supported by good humor with cool world building. I can’t wait to get this one in trade or hardcover!