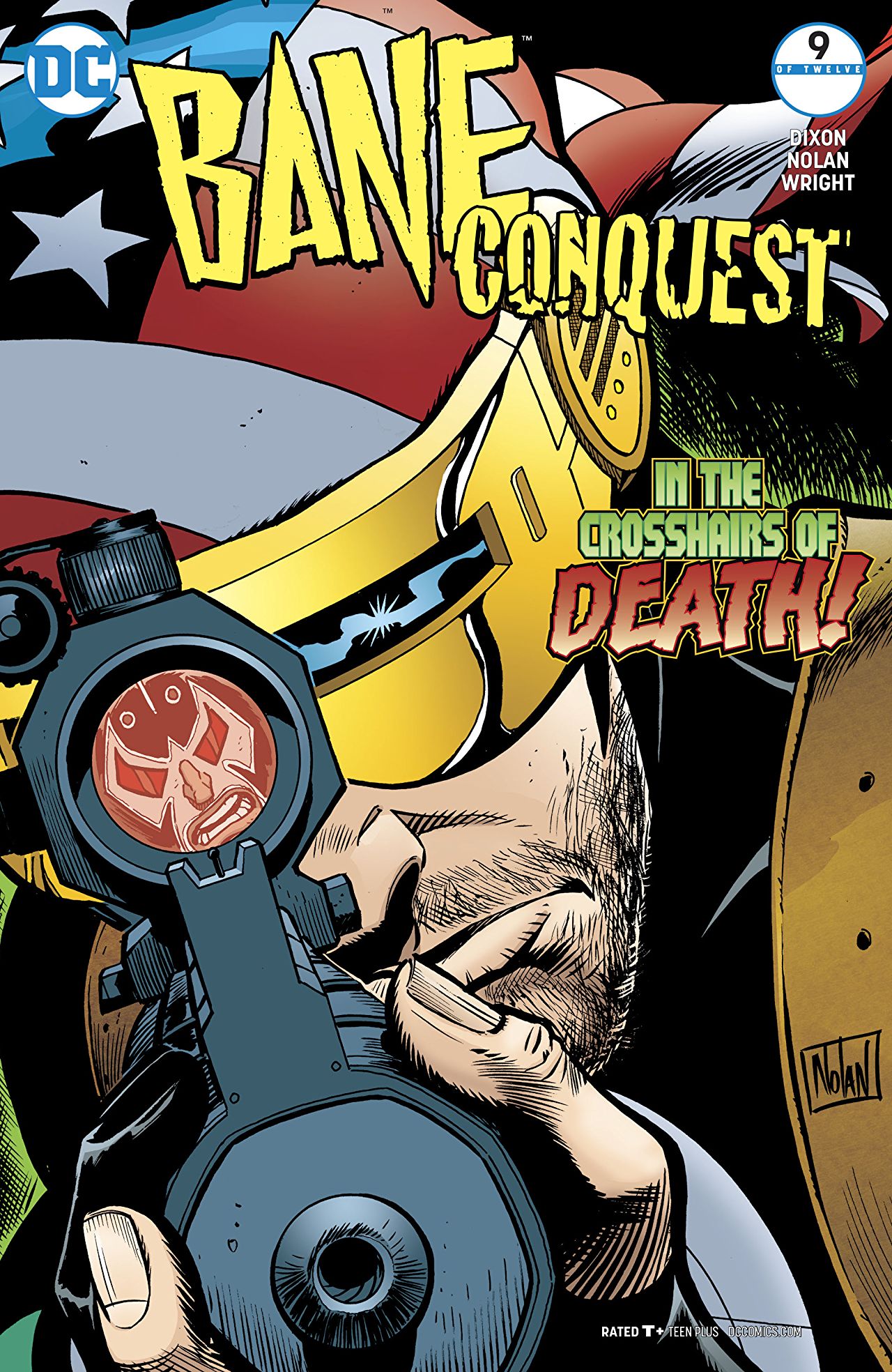 Overview: Bane hires a variety of specialists to pull a job, while Bird lines up some extra-heavy ordnance from Steppenwolf!

Synopsis (spoilers ahead): The action kicks off with Gunbunny and Gunhawk on a hit, when Bane interrupts the mission to persuade them (via his normally violent methods) to hire them for a mission. Gunhawk agrees but finishes the current hit first. Cut to an airfield where Bird is testing some advanced weaponry – he blows up a plane with some sort of energy bazooka and he orders ten of the weapon – the seller revealed to be none other than Steppenwolf! “Bane is an agent of chaos, I like chaos”, he intones ominously.

Meanwhile, in Istanbul, a stylish white-haired gentleman is going hard at the cards table, where he breaks the dealer’s bank with a winning hand! He’s revealed to be King Faraday, an old-school DC character. Just as all hell is about to break loose, Bane appears to take Faraday (now “retired”) into his services. In Nigeria, a disgraced general is about to hang. Just before he does, Bane and his agents swoop in. In Paris, a thief of some kind in a stealth suit evades pursuit, landing in his limo – that is being driven by Zombie, one of Bane’s henchmen!

Kobra is aware that one has gone to ground, a now infant Naga-Naga in the charge of Valentina, who is almost obsessive in her search for Bane. And what does Bane want with this newly assembled crew? It’s revealed that he’s going after Kobra, and more importantly, he wants to go after their “brain”, their citadel itself. The team picks off a Kobra operative in Jakarta. Once back at base, we see the awesome power of Zombie, which is to take the essence of life itself from the host – persuaded by Bane that Zombie has the power to give that essence back, the feeble prisoner spills the secrets of the Kobra citadel’s location. Sadly for him, Bane then says he was exaggerating! This guy won’t be getting his life-force back. He’s been PLAYED.

Meanwhile, Bane has his location and the team is assembled. Look out Kobra…

Analysis: Bane: Conquest is a welcome outlier in the comics coming from the Big Two at the moment. It’s extremely fun and fast paced, with an emphasis on a slick plot and sharp art, reminding me of a time when this was the norm at DC, particularly when Chuck Dixon was in full flight on multiple titles such as Birds of Prey, Detective Comics, Nightwing, and Robin. That’s not to say there isn’t fine work coming out of both houses now. But there should more of this kind of book, an action-packed crowd-pleaser that knows what a large portion of the audience still wants and craves. I’m all for a balanced line of books and Bane: Conquest is a real reminder of the storytelling power of the Dixon-Nolan team. Also, the brief Steppenwolf appearance in this issue is about a hundred times better than the much longer appearance in the recent Justice League movie! He just looks so BAD-ASS! Graham Nolan’s art throughout this book is top-notch and meshes perfectly with the script – I’ve also been highly impressed by Nolan’s innovative and aggressively dynamic covers that have featured across the Bane: Conquest line. They are interesting and make you want to grab the book off the shelf. Makes sense when you think about it!

Something to mention when talking about this series is how carefully the line has been walked over the character of Bane. He’s very much the engine of the story and yet he’s no watered down version of his past self, still both repellent and fascinating. In a sense, it’s the most interesting he has ever been, and this book featuring Bane and his associates has added depth and power to the character.

Final Thoughts: An excellent opening salvo on a new arc for Bane Conquest! Bane is going after Kobra and this title is COOKING! I’m wishing this was an ongoing series and I hope it leads to more DC work for the Chuck Dixon/Graham Nolan creative team who have been sorely missed by readers and fans.