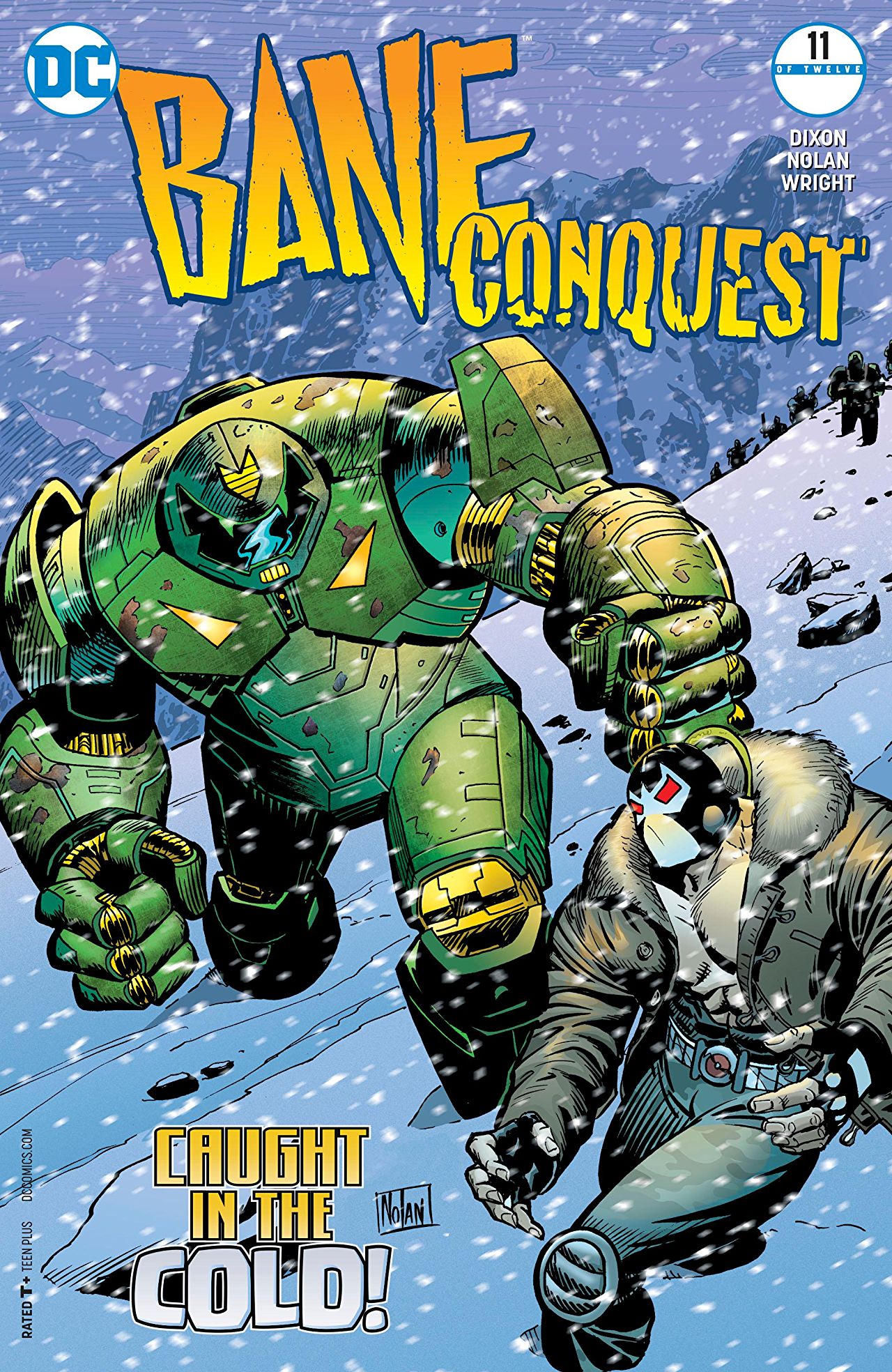 Overview: Bane and his cohorts pierce the mountain stronghold of Kobra, as Bane suspects Batman has infiltrated his gang!

Synopsis (spoilers ahead): The mood is bleak at the start of this book, as Gordon and another officer light the Bat-Signal on a rainy Gotham night, calling for a Batman who won’t come. He is seemingly busy, and a world away, Bane and his cohorts are scaling a mountaintop, seeking Kobra’s base, guided by the creepy Dionysus back at base. Gunbunny has to settle down a dispute between her man, Gunhawk, and the amorous Frenchman on the team, Crow. Together they infiltrate the compound, knuckling out hapless Kobra guards. Bane has grave suspicions that Batman/Bruce Wayne has infiltrated the team (surely the smart money is on the masked Crow) but he’s content to let the game play out, letting Batman’s skills aid in the infiltration.

Madame Valentina is on to the dangers of Bane and this incursion, but it could be too little, too late as Gunbunny and Gunhawk set up with a clear view of the kill-zone. In the meantime Crow disappears, guided by Dionysus’s directions., leading into the heart of the complex. Bane seems confident that his man, Kiang, is monitoring the treacherous Dionysus, but he could be mistaken – Dionysus is accessing the financials of Kobra, literally hundreds of billions of Euros, enough to entice anybody, even Bane’s loyal lieutenant.

Meanwhile, the fighting breaks out, as Bane confronts Faraday, who is calling an outside party on a communicator. Bane immediately leaps to the conclusion that he is Bruce Wayne in disguise, and he wastes no time in breaking Faraday’s back with his patented “back-breaking” maneuver, last seen in the classic 90’s Knightfall issue and countless tribute pages and video games since! However it appears Faraday is NOT Bruce Wayne, and Valentina confronts Batman in a robo-power suit of her own, causing Bane to pull out the big gun to put her down. As Bird fights on, pinned down by Kobra soldiers, Bane cuts loose, following a trail of bodies, and the discarded mask of Crow, before he finds…a Batarang!  Bane declares vengeance upon Batman, promising a reckoning will soon come.

Analysis: There is an almost eerie ghost lurking over some of the crucial beats in this issue – which mirror portions of Knightfall in a subtly classic way. Gotham and Gordon waiting for a Batman who won’t come, as the light shines over a dark metropolis, Bane’s infamous “back-break” maneuver on Faraday, and the set-up for another clash with Batman, seem to be born both out of the classic 90’s event and of this now too. The further we get away from those moments the more we hurtle to that same conclusion. The scene with Gordon at the beginning is a beautiful introduction to the issue – I get the feeling just from the opening scene that this team could do a whole saga about Gordon and the cops, and it’s one this reader would pick up.  We wouldn’t have to worry about Gordon hauling his tired ass into a Robo-Bat either. It’s a tantalizing glimpse into a series I’d love to read.

The character work amongst the team is slick and consistent, a staple of just about any Chuck Dixon comic. It’s an absolute pleasure to see minor characters but personal favorites like Gunbunny and Gunhawk get their time in the sun again. Another great pulpy cover by Graham Nolan grabs the attention, and the interior artwork is faultless, just great action comic writing. There is a solidness and a weight to the action that mirrors that classic Saturday morning cartoon feel, as the group infiltrates the base. Interestingly at eleven issues in, Bane is still a malevolent badass, he hasn’t sacrificed his criminal code at the altar of being the lead in his own comic. We buy into his struggle because the writing is smooth and the action slick. This is a DC heist comic and it’s a nice counterpoint to much of the product on the shelves.

If the Bane: Conquest series is truly Chuck Dixon and Graham Nolan’s farewell to the character they created, it’s been a classy experience that has left me craving more of this material inside and beyond the Batman Universe. Every issue of this series has been like a long cool drink on a summer’s day, refreshing and making me feel like another one. This is a good book.

Final Thoughts: Another very solid issue of Bane action, this one has some decent meat that will leave you hankering for more!