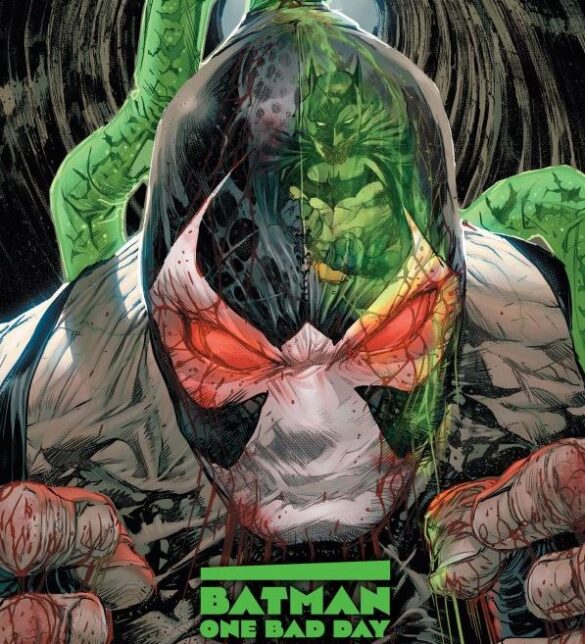 Overview: In Batman: One Bad Day: Bane #1, Bane must rid the world of Venom once and for all.

Synopsis (spoilers ahead): Batman: One Bad Day: Bane #1 begins sometime in the near future, as Bane is in the wrestling ring, fighting a challenger dressed up as Batman. As the two fight, Bane reflects on his history, moving from his origins as a boy born in Pena Duro prison in Santa Prisca throughout his career as one of Batman’s most powerful enemies. At the end of the fight, Bane breaks the would-be Bat-challenger’s back, and the paramedics are called.

After the fighter, Bane is in the locker room. The man dressed as Batman walks in. The back-breaking event was staged, but the man tells Bane he is a fan and that it was an honor to fight.

Bane goes home alone after signing a few autographs. He drives up to his mansion and settles down for the night in front of his fireplace, where a framed Gotham Gazette hangs above with the headline, “Mysterious Bane Breaks The Batman?”

Suddenly, an intruder gets Bane’s attention, and he grabs this would-be thief. The man pleads with Bane, telling the rogue he’s not here to steal. He offers a vial of Venom, saying that he found it in Texas. The man recounts the history of Venom, having been created by Dr. Randolph Porter. He goes into how Batman tried stopping the supply of Venom, as did Bane.

Bane grabs the vial and throws it into the fire. When the man demands payment for the Venom, Bane demands that this man take him to the lab. He will destroy the Venom supply, as he destroyed Batman.

Batman: One Bad Day: Bane #1 continues years ago, as Batman breaks into a lab that Bane is already tearing apart. He’s here to bring Bane in. Bane tells Batman that he only dared enter Gotham to shut this lab down, and he offers a truce. After the two stop the supply of Venom for good, Batman can have his precious justice.

Bane finishes telling this story to the kid who brought him the Venom, asking that the kid share his story in return. The kid tells Bane that his father owed money to drug dealers, and he was forced to repay the debt. Selling Venom was his ticket to freedom.

When they near the lab, the kid asks Bane about Batman’s death. Bane tells the young one that Batman and himself traveled worldwide, breaking up Venom supplies. Their final location was at Blackgate, wherein Batman noticed that Venom was hooked up to the anti-riot system, which means that it would disperse in gas form during a riot.

A villain by the name of Grudge greets them. Grudge is monstrous, and just one touch from him means an infection of Venom. Inmates surround Batman and Bane hopped up on Grudge’s Venom. A fight is about to break loose when —

In the future, Bane and the kid walk up to the lab complex. They surveil the place from a distance, planning to hit it at nightfall.

In the past, Grudge makes his way to the roof, planning to use the Batplane to spread Venom across Gotham City. Batman battles Grudge, ordering Bane to activate an E.M.P. that will stop Grudge. Batman gets bitten and is infected with Venom. The two battle near the E.M.P. device, which means Batman will be caught in the blast, but he demands Bane activate it anyway. Bane escapes, but Batman is caught in the explosion.

After finishing his story, Bane finds himself and the kid surrounded by guards. He’s knocked out and reawakens in a lab, tied to a chair. Bane finds out it was all a trap, that the kid was a lure to bring the villain here.

Bane breaks free from his bonds and beats his way through a bunch of goons. He strides deeper into the laboratory, wherein he finds a “big fan” of his — Dr. Porter. Porter, who has been juicing himself, considers Bane his “life’s work.”

Dr. Porter reveals that he created Venom to help Batman after Batman failed to save Sissy, Dr. Porter’s daughter. Batman rejected the Venom and fought to destroy it, so Dr. Porter faked his death. In secret, Porter has been perfecting different forms of Venom, but now he is dying. He wants to meet Bane and return the villain to his former glory.

Porter and Bane fight, but ultimately Porter gets the upper hand, breaking Bane’s back in the process. He promises to fix Bane, and Porter plans to use a new version of Venom. Porter forces the Venom on the kid first, who is strapped to a nearby medical table.

Bane gets to his feet and stops Porter. When the kid asks Bane how he fixed his back, he says that if Batman can do it, he can do it.

Bane sets off an explosion that destroys the lab and kills Dr. Porter once and for all. Bane escapes with the kid, passing out once they are safe.

News reports detail the fire in Texas, noting that the days of Venom may truly be over. Bane reawakens in a hospital bed, but now, he’s known across the globe as a hero. A shadowy figure appears. Batman tells Bane he has been tracking that lab for a while now, but Bane beat him to the punch.

Bane climbs out of bed after telling Batman that once, long ago, the day he broke the Bat was the greatest day of his life. At that time, Batman represented everything he had endured up until that point, but after that day, it was the worst moment of his life. Bane asks Batman to fight him, as per their offer. He knows he will die, but he wishes to die fighting the Dark Knight to escape his pain.

Batman, or at least the specter of Batman speaking to Bane, tells him that he understands how one bad day can control someone’s life. Batman challenges Bane to find a new way to live. Only then can they fight again.

After he’s recovered, Bane burns the framed Gotham Gazette headline, sells his house, and hits the road with the kid, looking to leave the past behind and start life anew.

Analysis: Batman: One Bad Day: Bane #1 is unlike every other issue in this One Bad Day series, and it’s better for it. Instead of going for a darker, edgier take on a classic villain, writer Joshua Williamson, artist Howard Porter, colorist Tomeu Morey, and letterer Steve Wands dig deep into Bane’s psyche and strive to set the character free.

Overall, it’s a beautiful, heartfelt issue that delivers quite the empathetic punch in the final few pages. The Bane featured in this book is a haunted figure. He’s haunted by his past, by the specter of himself and his fame, and by Batman. Stuck in reliving the glory days for an adoring audience, there’s a level of meta-commentary going on in this issue too.

Batman: One Bad Day: Bane #1 opens with Bane acting out his greatest victory against Batman again, “breaking” the back of a wrestler donning a Batman mask to cheering crowds. On some level, this seems to be a commentary on Bane’s last outing in the main Batman title (City of Bane), wherein he once more tried to claim Gotham for his own and “break the Bat” (albeit emotionally instead of physically). Disillusioned and stuck in the past, Bane goes home to rest in his chair and await a new day.

When an intruder offers him a vial of Venom to gain his former glory, Bane comes alive, setting off on a quest to finish what Batman and himself started years ago — rid the world of Venom.

Readers learn quickly that Bane and Batman fought together to bust labs all over the globe. During a fateful match with a monster named Grudge, Batman dies, sacrificing himself to save the rogue. This left Bane with no reason to continue fighting, as he hoped to battle Batman once more after Venom was eradicated.

Bane and the intruder head to the lab, wherein they meet Dr. Porter, the creator of Venom. Naturally, Bane overcomes a broken back to kill the doctor once and for all. It’s not spelled out how Bane recovers so quickly from a broken back, but a comment by Dr. Porter helps put the pieces together. Before breaking Bane’s back, Porter notes how Venom causes cognitive decline. In the hospital, Bane sees a vision of Batman speaking to him (we know this because Batman reminds Bane that a “vision” of himself challenged Bane to fight the Dark Knight before Knightfall). One can assume, then, that Bane used Venom to heal his back and take down Dr. Porter.

It’s this hospital scene, however, that seals the deal on what makes this issue great. Bane and Batman’s ghost have a heart-to-heart, and Batman urges Bane not to let one bad day rule his life. It’s something Batman suffered from, but Bane can be better. He can best the Batman and start a new day.

In the final few panels, Bane’s visions of his childhood and his pain vanish before his eyes as he sells his mansion and leaves to forge a new path. It’s beautiful, touching, and sentimental, and it endows Bane with a humanity that sets him apart from the other rogues. Plus, it turns the idea of One Bad Day into a series on its head, striving to inspire readers.

While there are a few wonky issues with the plotting (like Bane’s miraculous, off-panel recovery from a broken back), the story overall is pretty solid. Where this book suffers the most, however, is in the art. Morey’s colors give Porter’s pencils sort of a dusty, Western vibe during this book’s best panels, and at their worst, there’s an overall cartoony feel to the art. In any other book, Porter’s art could fit, as Porter has a zany style that defies more grounded character designs. In Batman: One Bad Day: Bane #1, Porter’s wild and unique style undercuts the tone, sometimes in direct contradiction to the weight and emotion Williamson and Wands bring to the scene. It makes for an inconsistent read and lessens what should be a tear-worthy impact.

Batman: One Bad Day: Bane #1 is a great story that’s paired with art that undercuts what could be quite the tearjerker of a tale.