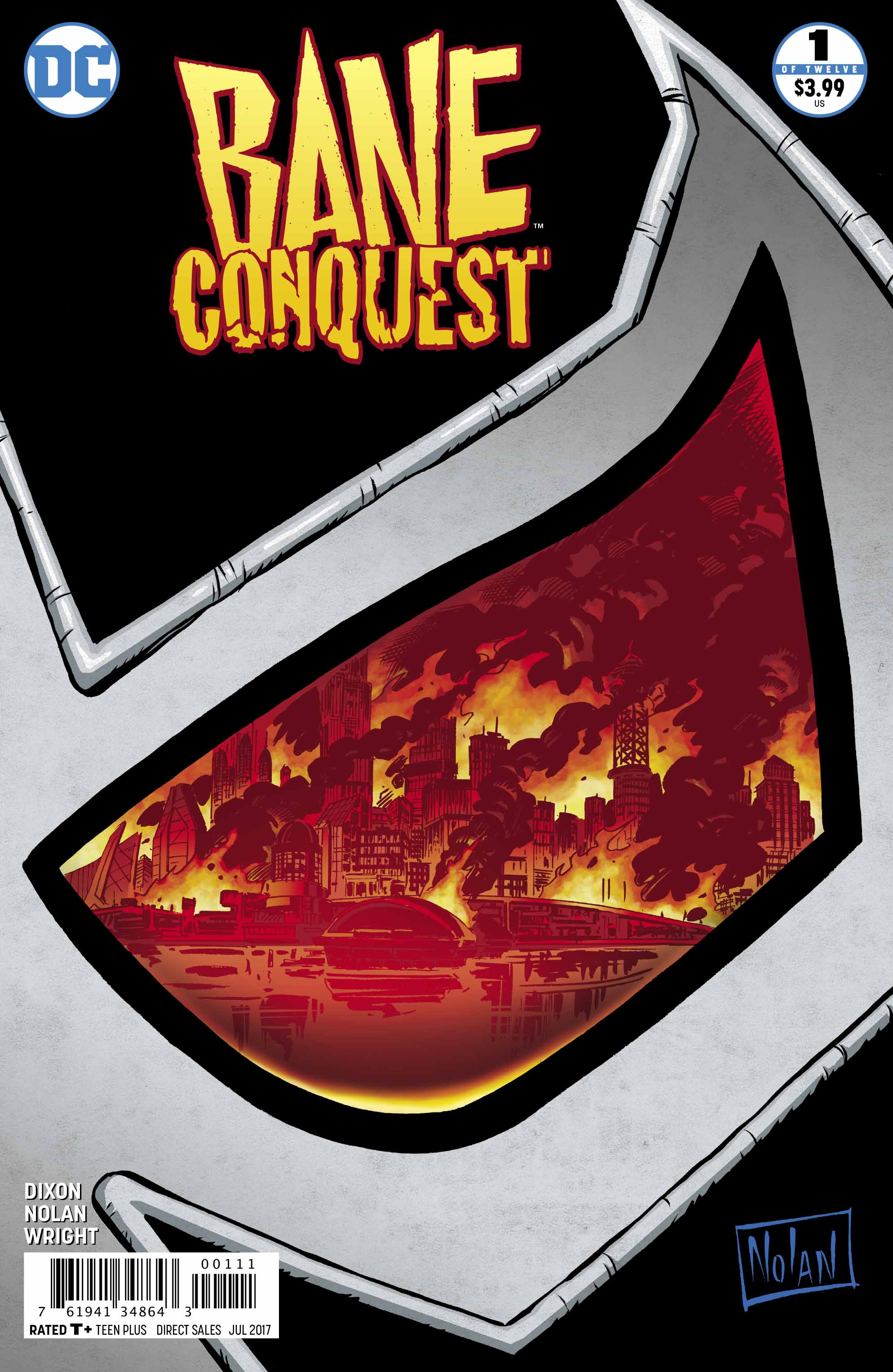 In Brief: Bane, breaker of the Bat, discovers a plot against his power in Gotham, and begins a search for his foes.

Summary (Spoilers): In international waters, a huge dark freighter crewed by desperate men notices a small boat bearing down on them. Piloted by Zombie, its huge gun blazing under Bird’s control, while Trogg impatiently questions the plan of the trio’s leader: Bane. Bane leaps aboard the freighter, telling his crew that he will destroy the threat to his city solo. Violently dispatching the crew of the ship, the gang finds spent plutonium warhead in the containers, indicating that someone was bringing a war to Bane’s territory. They scuttle the ship, and head of in search of vengeance.

In Gotham, Bane showers, remembering his time in prison as a child, with only a stuffed bear. He gathers a council of war with his three henchmen, and orders them to seek out answers from all the gangs, by any means necessary. Bane finds a lead from another criminal, but the police have beaten him to the target identified. Using Bird’s drones, they determine that Batman tipped off the authorities.

However, Bane’s team is wily, and steal Chango, the target, right from the courthouse using disguises. After brutal interrogation, Chango tells them their enemies are in Qurac, and requests a quick death.

Across the globe, the team watches as Bane again takes on a superior number of foes alone. Suddenly, Bane is hit by a massive taser bolt, the team’s van is blown up, and the mysterious Damocles appears, severing Bane’s venom tubes, and promising some very nasty fun in the future…

In Depth: The last time Graham Nolan worked for DC was for Villain’s Month in 2013, when Bane replaced the Batman title. Nolan’s work was solid there, but the storytelling a bit confused, and Peter Tomasi’s writing for Bane turned him from the ruthless but strangely admirable villain created by Dixon and Nolan into a run of the mill psychopathic dictator. The casual murder of his own troops is something Dixon has spoken out against recently as something Bane shouldn’t do, so it’s excellent to see that Bane, while perfectly willing to maim and kill those who stand against him, does not easily murder those who choose to follow him. The last time Dixon worked for DC, he wrote killer arcs of Batman and the Outsiders and Robin in 2008. Together again working for DC on their signature character, they’ve turned in an action packed, tightly plotted piece of work that builds on their work in the past, rather than rehashing it. Dixon has lost none of the sharp, lean dialogue he drove the Batman titles with for the 90s and early 2000s, and Nolan’s strong linework and storytelling really evokes the brutality, fear, yet strange sympathy with the character of Bane.

Though some hints of the depths that Bane’s character contains appear in the way he works with a team, but takes the main responsibility on himself, and his flashes of his imprisoned childhood, on the whole, this is merely an inciting incident, introducing our villain, his gang, their antagonist Damocles – and a hint of the Bat which haunts Bane so darkly. We know from upcoming solicitations that Batman and Bane will meet in this series, and interestingly, no hint of the conclusion of I Am Bane by Tom King can currently be seen. Though Dixon has said this series is in continuity, and he’s generally excellent at working with other writers, we can only hope that when Batman does appear, everything makes sense.

For now, though, we have an excellent comic by two absolute masters of the craft, starring one of their greatest creations. This is well worth the wait.

In Conclusion: Dixon and Nolan have begun a year-long journey with Bane, starting out with several literal bangs, from Bane’s fists to satisfying vehicular explosions.