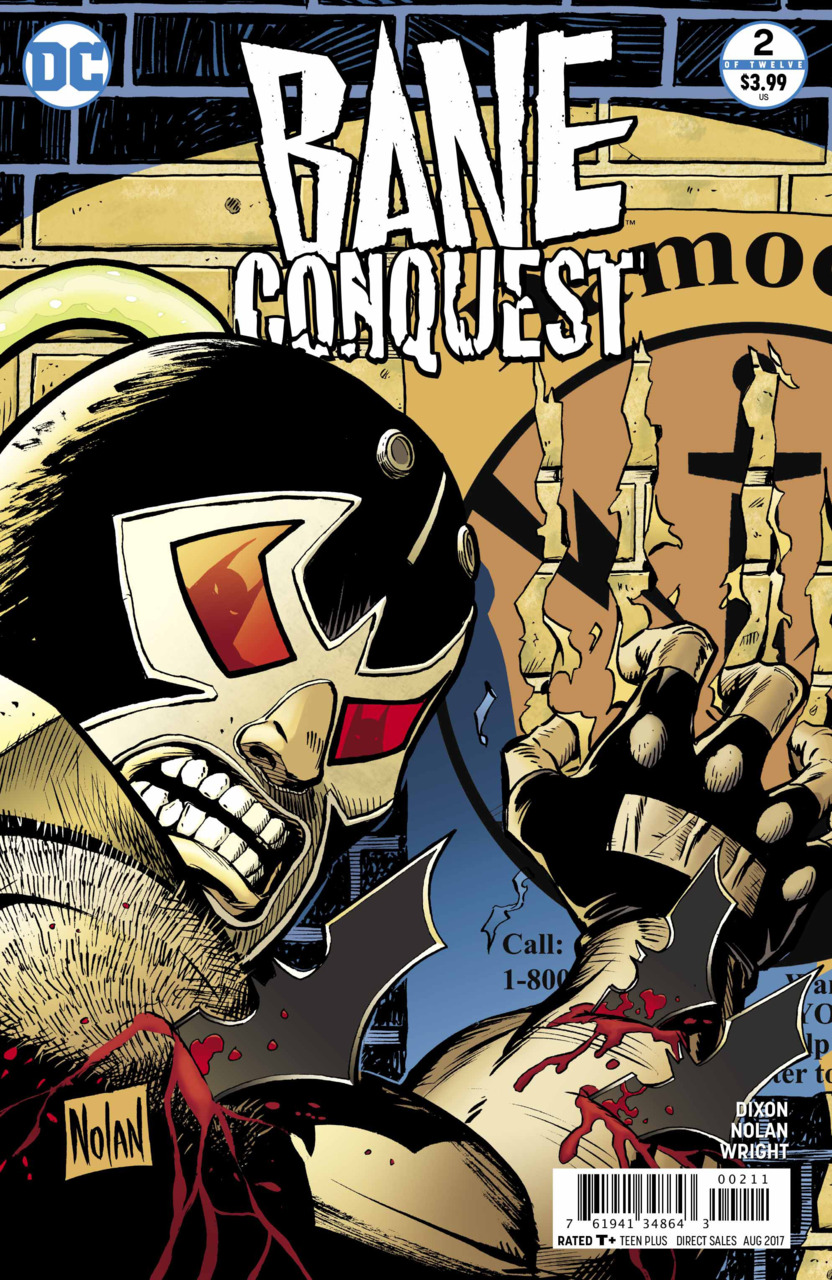 In Brief: Bane finds himself in a new prison, with a surprising ally, in his quest to rule the international criminal world.

While unconscious, Bane dreams of his tormentors in prison as a child, and his use of his stuffed bear as a hiding place for a knife. Waking, he finds himself in a prison with several hard men – and Bruce Wayne, who he knows as Batman. Wayne has been imprisoned for two days, after his parallel investigation with Bane in Gotham. He catches Bane up on the impossibility of escape, and Damocles’s criminal cult of personality, forming an empire.

Bane muses on Damocles’s name with Bruce, as his fellow prisoners hear that the two are actually conversing in multiple languages, preventing easy eavesdropping. They deduce that there must be someone above Damocles, like the sword of legend, before the daily food is served. Batman warns Bane not to eat too quickly, but he is drugged and brought in for interrogation. Using his memories of Santa Prisca as a method of blocking out the pain of torture, Bane returns to his cell, and Batman. They begin to work out an escape plan. When the food arrives, Bane rips the toilet from the floor and uses it to burst through the wall. Together, Batman and Bane take down the guards, though Bane disregards Batman’s request to restrain his killer instinct. They find themselves in a control center, where Damocles or his superiors have models of Batman, Bane, and others in costume. The issue ends with Batman and Bane affirming they are still mortal enemies, even though they are currently working together to escape.

In Depth: Dixon and Nolan continue their miniseries on Bane with a strong second issue. Showing a mastery of action tropes, such as the rivals in prison working to escape, and the methods of resisting torture by using traumatic memories of endurance, the story propels. Surprisingly, Batman shows up earlier than expected – though as Bruce Wayne, unmasked in Damocles’ prison. Bane knowing his identity places this firmly in the continuity of I Am Bane, where Bane knows Batman’s sons’ identities and hangs them in the Batcave. While Bane’s knowledge and use of Batman’s last name fits with DC’s current cavalier approach to secret identities, it also makes sense that Bane is more interested in Batman as a rival than taking him down by exposing his identity. The idea of a somewhat respectful rivalry between the two is the main enjoyment, here – we don’t find out much about Damocles’s operation or goals beyond “he wants to make a criminal empire,” but we do get a ton of Bruce and Bane showing their intelligence in the way they use languages to prevent overhearing, and planning and executing their escape.  The moment where Batman stops Bane from fruitlessly bashing the wall with his pipe, so Bruce can use the sink instead, is a very nicely written exchange, with really nice expressions by Nolan to sell the relationship between the two. Though this relationship seems a bit friendlier than Batman’s feelings towards Bane in fourth issue of I Am Bane, where his rage at Bane’s treatment of his sons prompted a brutal takedown, it’s a well judged balancing act, especially since Tom King did not choose to setup the practicalities of the status quo of Batman and Bane’s relationship post fight in I Am Bane.

Though Bane’s exposed mouth and nose in Nolan’s redesigned mask still take getting used to, and have prompted some fans to turn away from this book, the art is still really strong. Nolan’s thick linework can occasionally lead to expressions and faces being a bit blunter than other artists, but it lends a sense of weight without over the top brutality to the violence. Gregory Wright’s colors complement it well, with the action being completely clear, and the three-dimensional rendering not overdone, so that it feels like a perfect blend of the modern and 1990s aesthetic of the two main legendary collaborators. Dixon and Nolan generally choose their colorist in their projects together, so it stands to reason that the art team is up to their levels of craftsmanship as well. The classic red flashbacks show the subtlety of Wright’s work, using one tone to complement Nolan’s linework without feeling boring.

Pick up/Pass? Dixon and Nolan continue to bring their brand of solid, polished, satisfying storytelling. Nothing reinvented or mind-bending, but well worth reading. Pick up!.

In Conclusion: Bane and Batman fight alongside each other in a punchy prisoner drama.