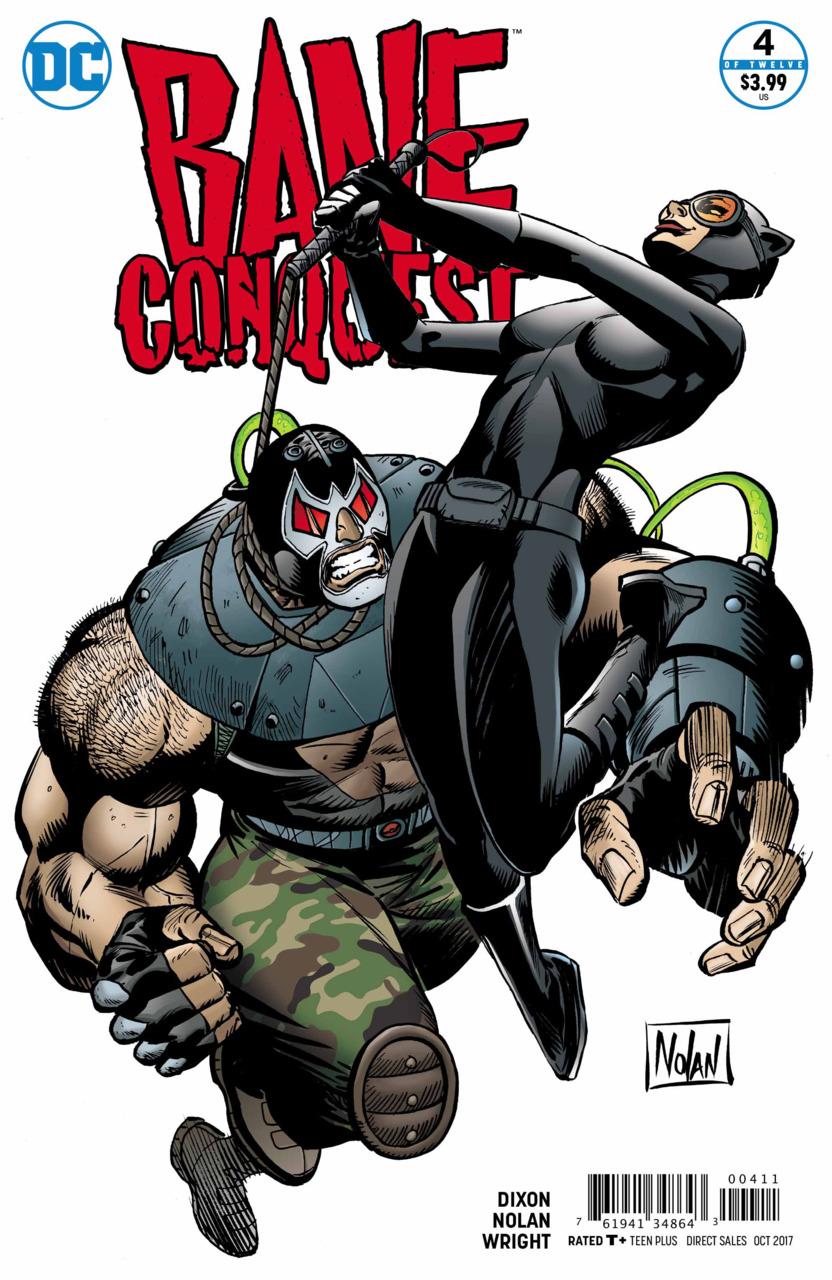 Overview: Bane’s path crosses with Catwoman’s as he matches wits with Dionysius.

Summary (spoilers ahead): In St. Petersburg, Catwoman meets a nervous contact named Dmitri. Unfortunately for our favorite feline fatale, Dmitri has set her up, and though she puts up a strong fight, the sheer number of heavily armed goons forces her to surrender to fight another day.

Meanwhile, Bane arrives in Almaty, Kazakhstan, and begins his takeover of Dionysius’s resources, much to the cyborg’s hidden fury.

Selina, chained in an interrogation room, receives the mission to plant a flash drive on the ruthless Vor gang.

After completely disarming Dionysius’s cybernetic body, Bane takes the tour of his new holdings, especially the huge database of secrets below ground. Dionysius believes in the power of pure knowledge, while Bane insists that the power of violence must undergird knowledge. Playing chess, Dionysius goads Bane into playing a game of higher stakes – who can first take down a criminal syndicate to prove their superiority. Bane’s soldier Trogg chooses the Vor, and the rivals being their operations. As Bane, Trogg, and Zombie infiltrate the Vor stronghold, Catwoman sees them as she carries out her own mission. Dionysius knocks out Bird back at the base and begins his betrayal, calling in the military on the Vor’s location. Bane finds Catwoman as he tries to disable security, but she sets off the alarms deliberately to prevent him from stopping her work – and likely for fun as well.

Analysis: Dixon and Nolan, along with colorist Gregory Wright, continue their classic globetrotting criminal adventures, adding Catwoman to the mix of their characters. The storytelling continues to be completely to the point and effective, with no wasted time in exposition – Trogg’s hatred of the Vor does not receive an extended flashback, but is instead merely a springboard to the collision between the agendas of Bane, Dionysius, and Catwoman. Though Dixon’s plot seemed like it was a bit too easily resolved last issue, the game between Dionysius and Bane, the former’s betrayal, and the entrance of a mysterious third party who captures and manipulates Catwoman to do their bidding gets things moving again.

With the issue of Batman’s proposal to Catwoman national news, Selina’s been popping up in books all over for the past few months. Here, we don’t get any reference to that situation, which could be a little forced, as the Birds of Prey proved, but we also don’t get a Catwoman obsessed with cat instagrams as we saw in Batgirl. This Catwoman is supremely confident, selfish, morally slippery, beautiful, intelligent – everything that’s made her relationship with Batman so compelling in Tom King’s hands, and what’s kept her character so beloved by fans for over 75 years. Dixon and Nolan have definitely given Catwoman the strongest voice this month, and it looks like she’ll be at least in the next issue as well, as her confrontation with Bane closes on a cliffhanger.

Of course, the real star of the book remains Bane. Thankfully, Dixon doesn’t fall prey to the temptation to make his protagonist a supergenius – Bane demonstrates his brilliance in playing chess and making his plans to take down the Vor, but also shows his weaknesses in his pride and over-reliance on violence. Because of these weaknesses, Dixon builds a sense that Bane could very well lose this round to his rival, despite starting with Dionysius literally in a cage at the beginning of the issue.