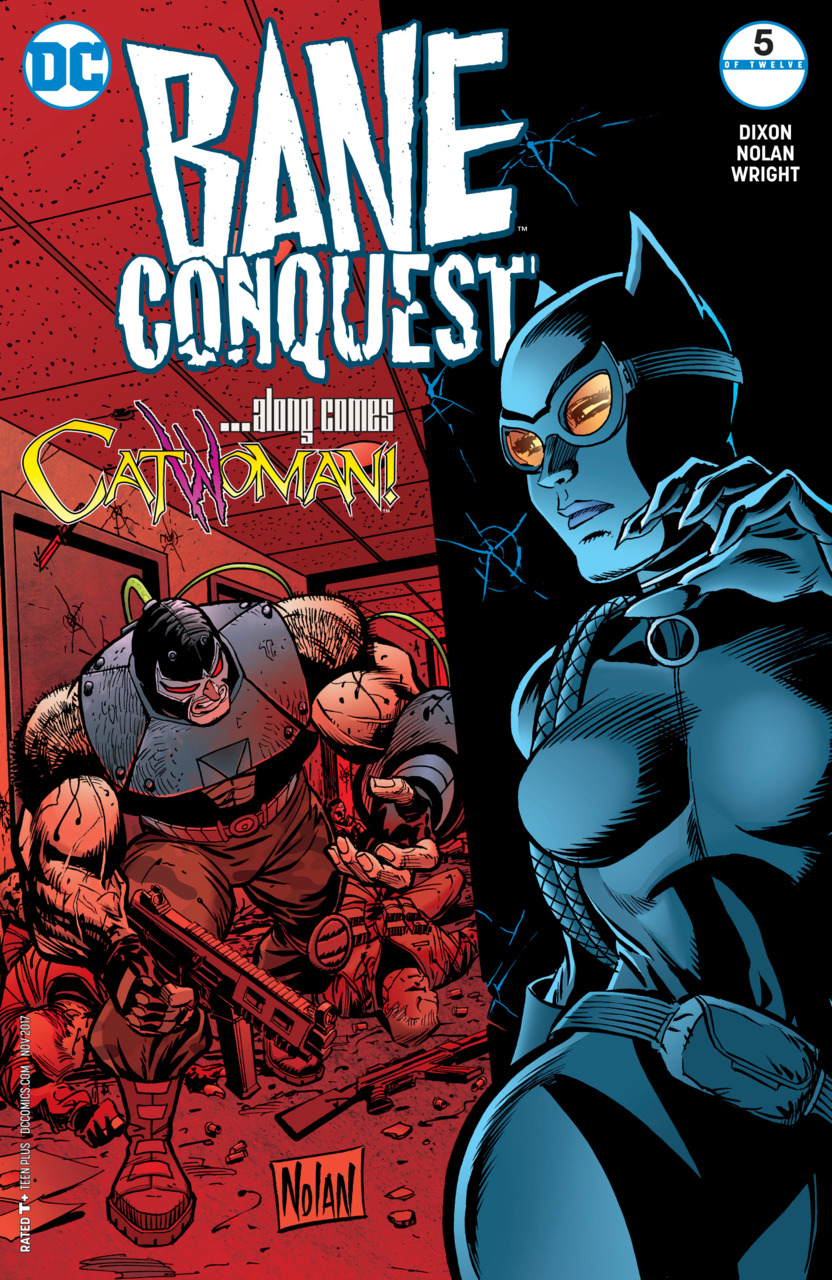 Overview: As Bane encounters Catwoman in his mission in Russia, the circle closes as Dionysius tries to entrap them both!

Synopsis (spoilers ahead): Conquest #5 begins with a bang as Bane violently collides with Catwoman, and she promptly tasers him to make a getaway. Meanwhile the Russians are closing in on Bane, even as communications are breaking down with his subordinates, Trogg and Zombie. Dionysus neutralized Bird back in the command center at the close of last issue and is now playing havoc with their communications as he also seeks to drain the networks of financial data. As Dionysius is busy doing this, the crime lords in the facility that Bane is busy penetrating start waking up to the action around them. The head crime lord is an interesting Clint Eastwood fan in a colorful shirt called Rango, who was busy watching movies with his Russian girlfriend when it all went down, and he has on old school machine gun and a delightful attitude to boot.

Meanwhile, Bane has caught up with Catwoman and this time he succeeds in nabbing the cat, literally holding her by the throat, but in true Selina style she manages to cut a deal at the last second and the two become brief allies in their quest to get out alive. As Rango attempts in vain to coordinate the capture of Bane and Catwoman, Bane is busy laying a trail of violent destruction in his wake. Selina notices him juicing up with Venom or something similar, which attracts the ire of Bane when mentioned.

As the Russian police close in on the facility, Rango’s computer experts notice all his money has been drained out of his accounts, courtesy of Dionysus, but before they can process that Bane himself has torn his way through their door. Catwoman plants a virus in the system which corrupts the data Dionysius was stealing. Bane is on the unfortunate end of another taser blast from Catwoman who rolls out of her own steam. Bird wakes up to deliver some justice to Dionysius and Trogg reaches Bane and together with Zombie they escape, with Bane commenting that Dionysius cheats in both chess and life. Bane’s retribution is unlikely to be pleasant…

Analysis: The first impression of this comic is the fluidity and fast paced nature of the storytelling – it moves like clockwork and has fun while doing it. Graham Nolan on art renders a fantastic Bane, who seems slightly more humanized than in his full 90’s Venom-fueled glory, and his Catwoman in her black suit and googles is on point throughout. Chuck Dixon makes us feel the sheer brutality of Bane as he guns his way through the criminals – there is zero regard for life, he is as dirty as them, but somehow his dedication to the mission, the clarity of his goal, does work to makes us root for Bane a little. It’s story without a traditional “good guy” and it’s fascinating as Dixon deliberately plays in the grey on this one and it works.

As a reader with a soft spot for Selina, she’s used well here, the ultimate gun for hire, she does her job and gets out clean. Nolan’s art jumps off the page when dealing with Catwoman, and her dark color palate matches a story that takes place inside the shadows of a bunker. She’s playful but deadly, not invulnerable but also strangely not scared by the lumbering, deadly hulk that is Bane. Ice must run in her veins.

The cliched review would be to call this an old school comic book, but in 2017 it doesn’t need to be – more comics should be such fluid page-turners. Chuck Dixon and Graham Nolan show all the kids why they have the legendary rep and it’s watch this space as we hit the mid way point next issue on Bane: Conquest!

Final thoughts: A tightly told action story with an emphasis on movement and fast double crosses that captures the spirit of both Bane and Selina perfectly. For lovers of Bane and Catwoman, this issue was extra special. Good comics from the Dixon-Nolan team!