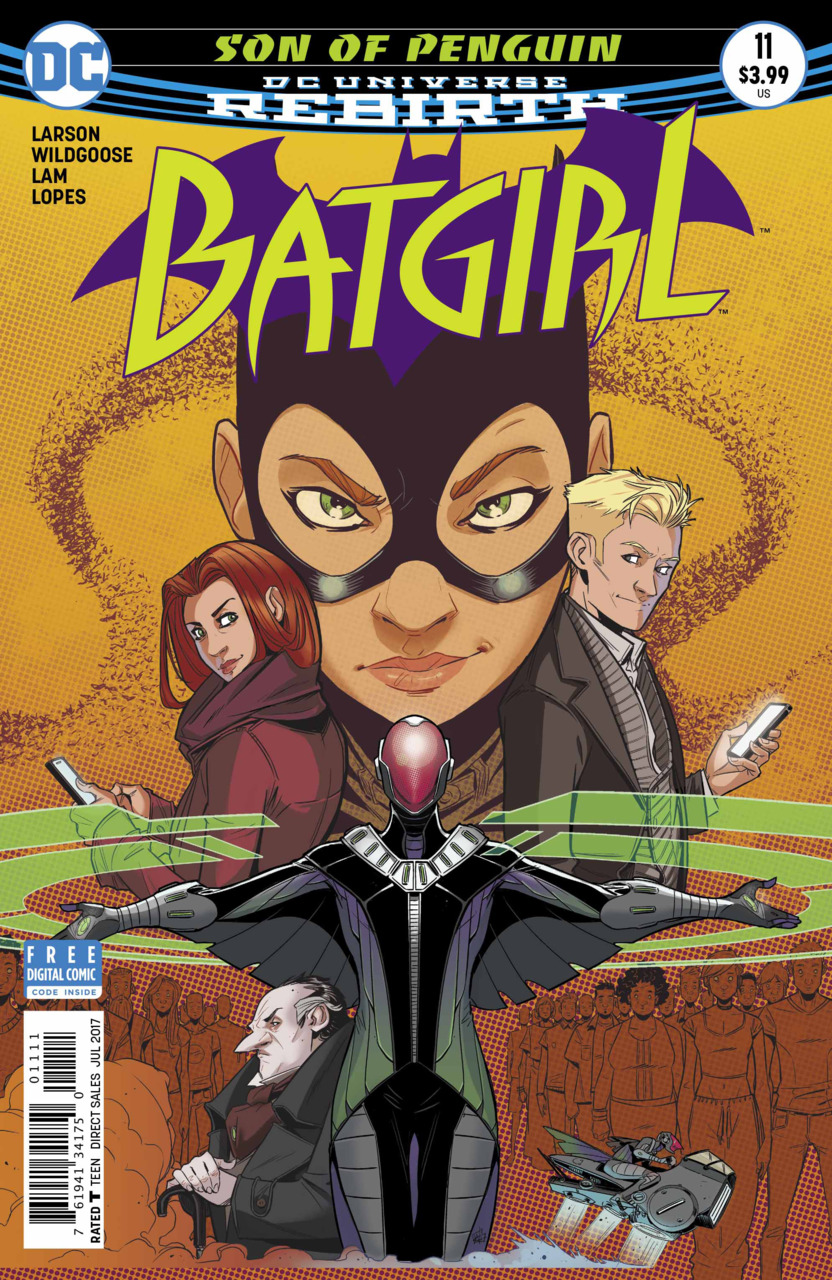 In Brief: Ethan’s plans as the supervillain Blacksun are revealed, and Batgirl must rush to save the day.

Summary (Spoilers): As Ethan reveals himself as the villain Blacksun to his father, the Penguin, Batgirl bursts through the skylight. Ethan uses his “murmuration” power of data mining people’s lives to influence a huge group to distract, then attack, Batgirl and Penguin. Penguin, demonstrating that he lacks the patience to even tie his own tie, let alone help Batgirl defeat his son, bails.

Babs and Ethan take to the streets, trading insults and Blacksun reveals his plan to rule Burnside through his computer data mining mind control. Babs realizes that if she can get Blacksun to a place without phone signals, his powers will fail. Disguising herself as Dick, knowing Ethan caught her rendezvous with her friend last issue, she goads his jealousy to cause him to chase her to the woods, where his grip on the crowd fails. She kicks him in the chest, but accidentally causes a massive power surge in his suit, burning him badly. Batgirl uses her gadgets to put out the fire, and leaves him with her regret for his bad choices.

Two weeks later, Frankie has moved back in with Babs, and they throw a welcome back party in the apartment. All of Babs’ friends, including Alysia and Jo, are happy again, and she tells them she broke up with Ethan. Across town, we see Penguin kidnapping his disfigured son, telling him that his new ugliness has warmed his fatherly impulses, and they will work together as evil father and son.

In Depth: Though the “Son of Penguin” arc had a really excellent penultimate issue last month, this conclusion feels a bit inconsequential, not sticking in the memory as a solid ending and confrontation. Though Larson creates a nice resolution to Ethan’s tech-powered mind control, it feels a bit too much like the overly technological magic of the original Burnside run, where the villains tend to blend into each other with their megalomaniacal plans and ridiculously implausible gadgets. Blacksun’s design by Christian Wildgoose is significantly better than most of the villain designs by Babs Tarr and her artistic collaborators, but it sadly doesn’t make him stand out any more. His general pathetic nature, being goaded by Babs into a jealous rage, doesn’t really help him much. It’s safe to say that Ethan Cobblepot isn’t going to become a James Gordon Jr. anytime soon – there just isn’t the same kind of danger and intelligence behind his villainy.

After two full arcs and a transitional issue, Hope Larson’s strengths and weaknesses have come into focus as a superhero writer. She does well with Babs’s voice and sense of responsibility yet uncertainty, and creating clever plots and structures like the hyperfocus mode or the murmuration powers in this issue. However, she also relies much too heavily on limp romance plots that go nowhere, and when she tries to develop some civilian life for Babs, it either feels like she read a bunch of wikipedia articles, like the little girl at Babs’s coding workshop, or completely unnecessary, like Frankie and Alysia’s problems in this arc, which were solved too neatly. It’s something of a recurring theme in these reviews, but Babs owns a tech company – having Frankie and Alysia involved in some kind of scheme against Vicform would have been a much more interesting way to involve Babs’s civilian life in the plot than the direction Larson chose to go.

Lastly, though Christian Wildgooses’s pencils are really appealing and cute without being overly saccharine, the colors on the book by Mat Lopes remain flat and lacking intensity. It might be nice to have the kind of mood and dramatic sensibility that Allen Passalaqua brings to Babs’s other book, Batgirl and the Birds of Prey, to complement the excellent clean lines by Wildgoose.

Pick up/Pass? A solid conclusion to the arc, if somewhat forgettable. Worth a pick up if you’ve been buying the arc to this point.

In Conclusion: Batgirl handles the conclusion of her second Rebirth arc well, if unmemorably.