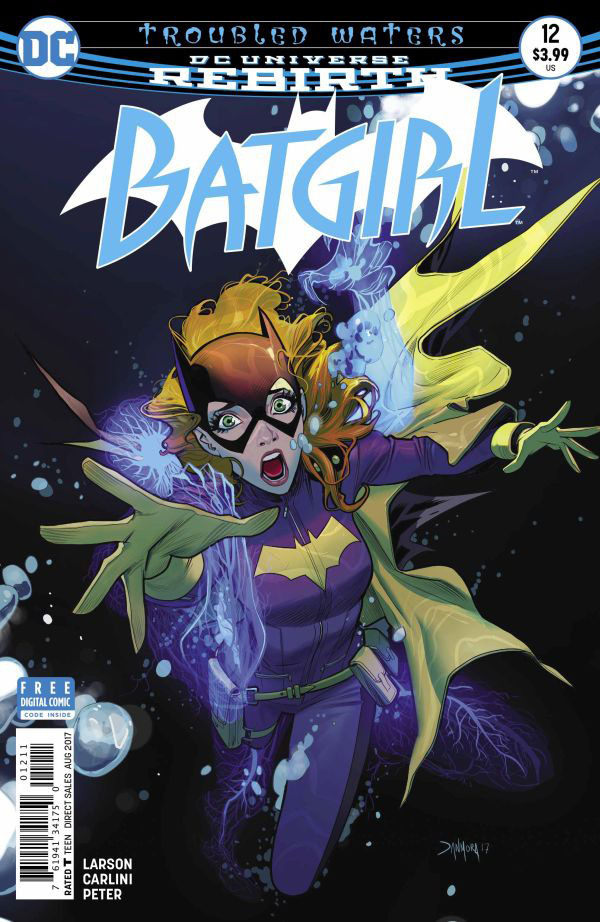 Summary (Spoilers): At the Burnside Y, Batgirl is fending off obnoxious “paranormal reporter” Kayla while she investigates reports of a haunting in the pool, causing a lot of trouble for the local swimmers of all ages. While Babs approaches the problem scientifically, taking water samples, Kayla attempts to contact the ghost by jumping in the pool to attract it.

Later, Batgirl asks Qadir for help, and he recommends a chemistry grad student he has a crush on – and Batgirl, as good friend and investigator, kills two spectral birds with one stone by taking Qadir along with her. The chemist, Analyn, can’t find anything unusual about the water, but hits it off with Qadir while Babs heads off to a physicist, Professor Radden. Babs researches Radden, remembering his attempt to hang onto her coattails when she launched Gordon Clean Energy. She notices that Raiden’s assistant is Liana Soto, whose missing person flier she saw at the Y.

Doing a bit of the Batgirl breaking and entering for a good cause, she combs Soto’s apartment for clues, and finds indications that Radden may have stolen Soto’s teleportation research for his own. Doing some quick hypothesizing, Batgirl dons a Bat-swimsuit and gathers Kayla, Qadir, and several other friends to try to bring Liana back.

Though Kayla continues to be her annoying self about ghosts, Qadir and Analyn are enjoying the time together, when suddenly Liana’s “ghost” appears.  The energy apparition fights off the friends, and Kayla claims that ghosts can’t see. Babs makes a guess that Liana can use the camera to see her way back to reality, and it works in dramatic fashion. Liana confirms that Radden used her own experiment to get her out of the way of stealing her research.

A week later, Frankie and Babs hang out in a cafe, reviewing Liana’s performances as a summer worker at Gordon Clean Energy. Babs thinks about hacking the camera that Liana absorbed as she was breaking back into reality, and the issue closes with Liana sitting happily on her balcony in Burnside.

In Depth: Just as she did after the “Beyond Burnside” arc, Hope Larson gives us breathing room after Son of Penguin. However, just as with the last one-shot, the story doesn’t really give us a good reason to remember it. Though Babs’s relationships with old friends like Qadir and Frankie are handled nicely, they don’t really develop more than their new 52 flat personalities in Larson’s hands, and the balance between Batgirl’s belief in science and the irritating Kayla’s ghost faddishness isn’t very consistently handled, with Babs sometimes being proved right in contradiction the superstition of the ghost-hunter, and sometimes buying completely into her silliness and succeeding.

Where the writing proves lackluster, the art, by Eleonora Carlini from Italy, longtime backup artist for the Burnside run (she provided large chunks of issues 47-52, as well as doing some excellent work on the Rebirth Green Arrow title) enhances the material to a huge degree. Carlini makes excellent use of setting the scenes, giving the Burnside Y a sense of place, capturing the feeling of the people in the pool in the many aquatic scenes, and giving a lot of appeal to the character designs and facial expressions. She gives everyone a cute swimsuit – seeing Batgirl in cowl and Bat-swimsuit is definitely a highlight of the issue for humor and stylishness, and her dynamics between characters like Qadir and Analyn are delightful. Even better, her work complements Christian Wildgoose pencils on the last arc very well, leading to a sense of continuity of style even when the main artist has to take a break. Brazilian artist Cris Peter handles colors for Carlini, and her work shows the difference a colorist can make for a book in contrast with Mat Lopes’s work for Wildgoose. Where Lopes gives us largely flat areas of color and a sense of overlit cheeriness, Peter (who largely works in independent comics these days, it seems, but collaborated with fellow Brazilian Rafael Albuquerque in 2008’s Robin/Spoiler Special with similarly moody and dynamic color work) gives the story a sense of drama and depth without over-rendering the shapes of the characters. Part of the dramatic look of this issue is no doubt due to the “ghost story” Larson shoots for in the narrative, but there are shadows in Peter’s world, while Lopes mostly just has even, uniform, somewhat beige light over all scenes.

On the whole, though Carlini and Peter give excellent visuals, the lackluster narrative doesn’t really wow us after a rather anti-climactic conclusion to the last arc. Hopefully the ties to past continuity in the upcoming stories – Catwoman and Nightwing are both slated to appear soon – will give the book a needed bit of interest to keep fans engaged.

Pick up/Pass? Carlini’s art is always worth getting, but Larson’s writing is a bit meh. Trade wait recommended.

In Conclusion: Batgirl takes a break from romantic troubles to engage with her community for a welcome, but a bit dull change of pace.