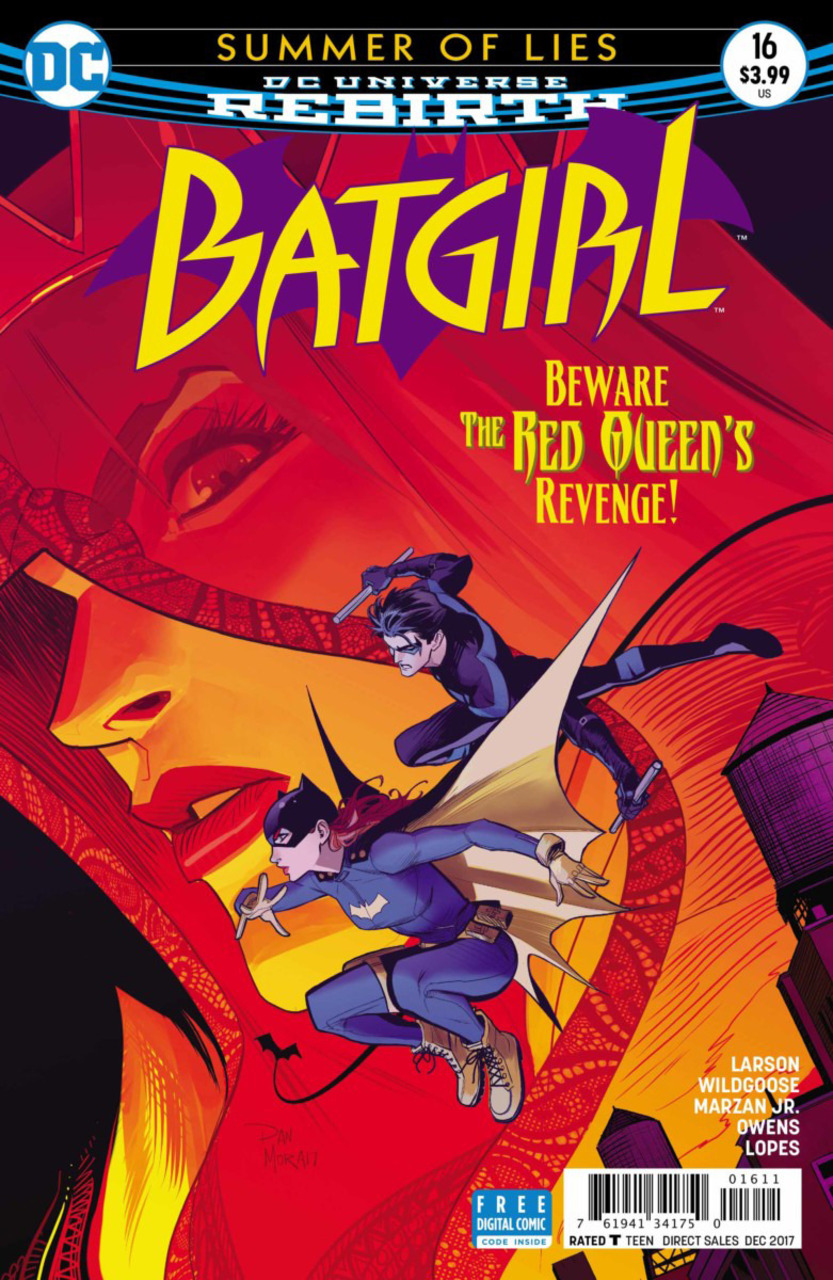 Overview: Batgirl and Nightwing finally uncover the identity of the Red Queen and her relation to Ainsley Wells.

Synopsis (spoilers ahead): The story starts off in the past as Batgirl and Robin drop in on a bunch of hackers.  After a quick skirmish, they explain to the heroes that Ainsley is involved with the Mad Hatter who is working on a nano-tech drug called EMJ that does not show up on any tests.  Batgirl and Robin make the connection that the song they keep hearing is the program for the drug.  After leaving the hackers, Batgirl and Robin discreetly follow Ainsley as she heads through a bad part of town to attend an addiction support group.  They eavesdrop on the session, even though Batgirl has reservations about doing so, and then end up kissing.

In the present day, Barbara and Dick are headed to a place called Seaboard Recovery center on a hunch that it is next on the Red Queen’s target list.  Upon arrival, they quickly realize the staff have been drugged and are abusing the patients.  They change into their costumes and attempt to quell the riot.  Batgirl accomplishes this by playing the Emoji song over the PA system causing the drugged staff to relax and experience pleasant hallucinations.  They contain the staff and, in the course of their examination of the break room, they discover that Ainsley is dead and that her sister Edith is the Red Queen.  They realize Edith was present during the fight and race out to apprehend her only to discover that she has already fled.  Batgirl is frustrated by the turn of events and asks Nightwing to come home with her before they wrap up this investigation.

The story then goes back to the past where Batgirl and Robin decide to confront the Mad Hatter on their own.  They burst into his hideout where they see him and Ainsley apparently working together on something.

Analysis: The first thing I have to do is take a victory lap for correctly predicting the identity of the Red Queen.  In the “Final Thoughts” of my review of Batgirl #14, I predicted that the Red Queen would turn out to be Ainsley’s sister and not Ainsley herself.  I’m glad that turned out to be the case because the story somewhat avoids the cliché, predictable villain it was hinting at.

Like the past issues in this story arc, there are a couple of really funny one liners throughout the issue (“Is this fear of confrontation a Midwestern thing?”).  However in this issue there are some moments, particularly between Batgirl and Nightwing, that didn’t make a whole lot of sense to me.  When listening in on Ainsley’s support group meeting, Batgirl seems upset because of the situation with her friend and she feels like she is compromising her principles to spy on her friend.  Robin justifies their actions with a proverb and they end up kissing after she starts crying.  I understand that my position on this is probably highly subjective, but that sequence of events just did not make any sense to me.  Based on everything we have read up to this point in this arc, it is very likely that this is supposed to be their first kiss, but the moment just felt very forced.  Later on in the story, in the present day, Batgirl appears very upset about learning about her friend’s death and how they’ve failed in their investigations, but she asks Nightwing to come home with her.  I could be wrong about this, but based on her blushing and the hesitant way she asked the question, I’m going to assume that she’s not offering that merely as a friend.  Normally, I’d be happy that Batgirl and Nightwing are becoming closer to each other, but it just feels out of place here.  Batgirl just discovered her old friend is dead and they’re in the middle of a time sensitive investigation that she has been really frustrated with thus far, so this development in their relationship feels a bit forced.

I’m also concerned about how three out of four issues of the arc have been completed and we have yet to really see or hear from the Red Queen outside of one panel at the end of the issue #14.  We also do not know what Batgirl and Nightwing did to Ainsley that they feel so guilty about and what Edith is seeking revenge for.  I also feel as if the story isn’t really clear on how the EMJ drug actually works.  Sometimes it appears to be mind control and other times it elicits hallucinations that have been both good and bad depending on the person.  It’s also unclear how the Emoji song connects to the person under the influence of the drug.

I’ve consistently stated that Wildgoose’s art is a really good fit with the Burnside version of Batgirl.  I really like how the art style vaguely resembles something out of a fun Saturday morning cartoon.  But even within that style, I feel as if some of the characters are not being drawn consistently enough.  Dick Grayson in particular, whether it’s in the flashbacks or present day, appears to have different proportions in different panels.  Subtle, quirky touches like drawing the odor emanating from the hackers’ washroom keeps the mood of the story light even though this was a more serious issue that the past.  The colors also reflect this as they are more subdued reflecting the slightly darker nature of this issue.  The exception is the final page where the Mad Hatter’s lair looks like a psychedelic trip on its own with the electric blue and mushrooms painted on the walls.  I’m interested to see how this will look in the final issue.

Final Thoughts: After a promising start, the “Summer of Lies” story arc has had a somewhat underwhelming middle act.  There are still quite a few plot threads to tie up in the next issue.  Of course, we are all eager to see how the latest potential development in the Babs-Dick relationship plays out.  Hopefully Larson can tie up the loose ends and end the story with a definitive conclusion.