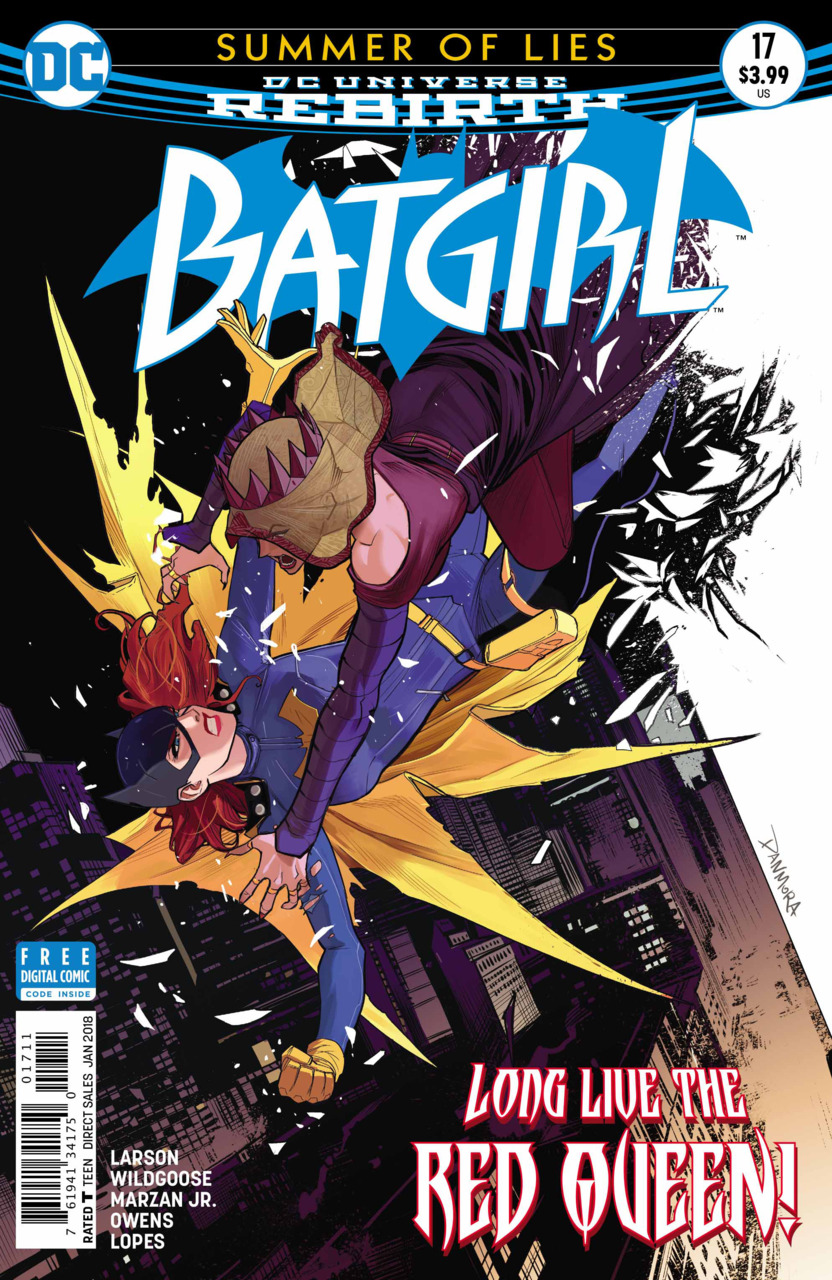 Overview: The end of the “Summer of Lies” story arc features Batgirl and Nightwing confronting the Red Queen while more of Ainsley Wells’ story is revealed.

Back in the present day, in Barbara’s bedroom, Barbara and Dick are waking up from what looked like a very restless sleep. Dick is sleeping on an air mattress on the floor because he says he’s not over Shawn yet. They suit up to pursue the Red Queen (Edith Wells) by following Batgirl’s research on Edith to lead them to a warehouse in South Burnside. Edith spots them outside through a surveillance camera and allows them to come in through the door because she says it’s a game.

Once inside, both Batgirl and Nightwing attempt to talk Edith out of her plan, but she is adamant that the duo is at fault for what happened to her sister. The duo is then attacked by a swarm of giant nanobots that are capable of injecting people with a drug that makes them subservient to Edith. Nightwing is stung by one of the nanobots causing him to turn on Batgirl. Batgirl reluctantly fights Nightwing, but realizes she has to quickly devise a strategy to return him to his normal self. After failing to use the Emoji song, she decides that she can rewrite the nanobots in his system with the memories stored in her neural implant by transferring the data through an EMP released by her gloves. The only downside to this strategy is that her neural implant would stop working, rendering her unable to walk. Upon seeing memories of his younger self through Barbara’s eyes, Nightwing shakes off the Red Queen’s control. Edith transforms all the giant nanobots into a suit of armor and Nightwing and Batgirl use an unorthodox maneuver to take her down.

The story flashes back to Batgirl comforting Ainsley and Barbara covering for Ainsley at work. Barbara eventually discovers Ainsley unconscious in her own apartment and calls the ambulance. As Ainsley is being attended to by paramedics in the ambulance, Barbara is comforted by her father who says she did the right thing and saved Ainsley’s life. Later on, presumably right after Ainsley dies, Robin visits Barbara in her bedroom. They kiss but Barbara says she can’t do that at the moment. They affirm that they’re best friends and will be there for each other as they share an emotional hug.

Analysis: The end of this arc didn’t really appeal to me or feel impactful to Barbara or Dick in any way. I never got the sense that there were any real stakes or consequences for the heroes here. Even when Nightwing was subjected to mind control, I had no doubt that Batgirl would find a way to return him to normal. This arc also hinted at events that happened in the past that made Batgirl and Nightwing feel very guilty. Now that we have read the conclusion, I’m still struggling to figure out why they would feel guilty about what happened with Ainsley. The flashbacks show Barbara and her alter ego trying to help Ainsley whenever possible. There’s no sign that any of their actions led to Ainsley’s death. Ainsley’s death is a tragedy, but I don’t see how Barbara and Dick feel responsible for it.

The moment in the present day in Barbara’s bedroom also felt a little awkward in my opinion. It’s not explicitly stated or shown that Dick and Barbara hooked up, but it’s strongly hinted at. If that is the case, then I don’t understand why Dick would elect to sleep on the floor. Dick says it’s because he isn’t over Shawn yet, but he’s already had a relationship with Helena in his own book right after breaking up with Shawn. I’m all for seeing Barbara and Dick romantically involved, but it just didn’t feel natural here. It seemed like it was put into the story just to throw a bone to the fans of a Barbara and Dick relationship.

The final confrontation between the heroes and the Red Queen was really brief and underwhelming. Barbara was able to use her incredible mind to figure out a way to save Nightwing, but the method she picks seems really unrealistic even by comic book standards. I also did not like that the process left her essentially paralyzed for the end of the fight. After three issues of buildup, the Red Queen should have put up more of a struggle and not been dispatched so easily.

One of the better Barbara and Dick moments was in the flashback near the end where he comes to see her after Ainsley’s death. Even though there is another awkwardly timed kiss here, the conversation they end up having strikes the right emotional chords and explores how much they mean to each other. Batgirl and Robin/Nightwing also have really good chemistry while in costume in this issue.

The art has been more of the same as the past three issues, although I have started to notice that Nightwing’s body can be awkwardly proportioned at times. I liked the design of the Red Queen’s costume but I thought the nanobot armour was clunky and unnecessary given how easily she was dispatched. The colors of the issue are really what standout to me from a visual standpoint. It is very simple but effective. I think Wildgoose and Lopes would be a great fit for a Super Sons story arc at some point.

Final Thoughts: The conclusion of the “Summer of Lies” doesn’t live up to the potential I felt it had after reading the first issue. The storyline with Ainsley ended up being less emotional than I thought it would be because I still don’t know why Barbara or Dick feel guilty or responsible for what happened. There also wasn’t a lot of synergy between this story and what was happening in other DC titles. I also felt that including the flashbacks made the present day story feel too rushed for four issues. Since the flashbacks were an integral part of the story, it would have been beneficial to expand the arc beyond four issues. Doing so would have also allowed the creative team to explore more of the early Barbara and Dick relationship that was the biggest bright spot of this story.