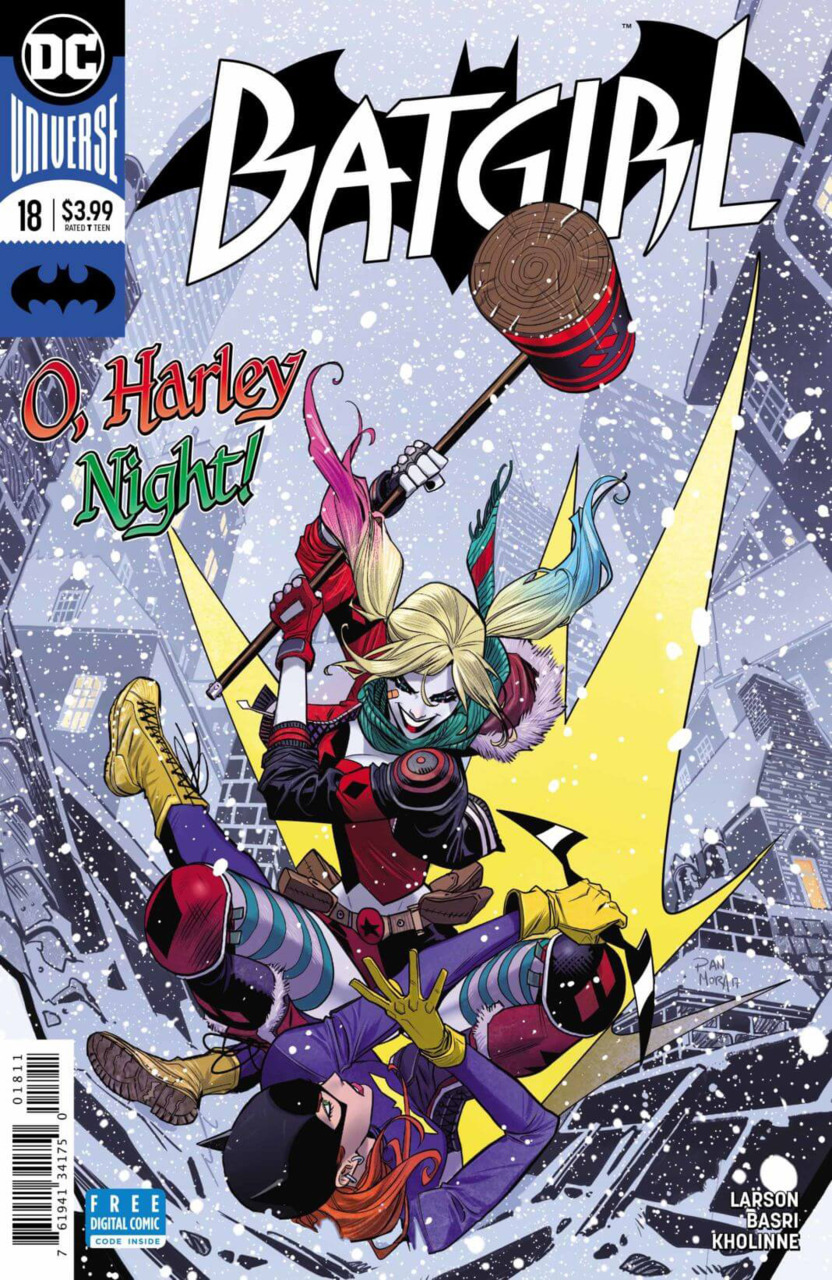 Overview: Barbara Gordon and her friends are having a night out to enjoy Christmas when their night gets derailed by Harley Quinn trying to a teach an unethical CEO a lesson.

Synopsis (spoilers ahead): Barbara is getting ready for a night out with friends when she is interrupted by screams for help outside her window. She suits up as Batgirl and saves the man by taking down a villain calling himself the Wrapper. Barbara then rendezvous with her friends at a hipster bar in Burnside only to find that the bar is double-booked with corporate party of a startup called Smellicule. Alysia tells the group that the CEO, Bradley Burr, is a shady person who donates money to anti-LGBTQ-Plus groups. Santa chooses this moment to make his appearance at the party by saying he has a gift for Bradley. The gift is a bunch of sparkly but harmful gas that infects everyone at the party and Santa is revealed to be Harley Quinn in disguise.

Harley says she is targeting Bradley because she also believes him to be unethical. She makes her exit via helicopter but not before she says that it’s a game and Bradley just has to figure out the reason for the season in order for them all to get the antidote. Batgirl, Alysia and Frankie brainstorm what Harley might have meant and come up with family, charity and religion. The trio decide to investigate their hunches and take Bradley with them after they instruct everyone infected not to leave the bar.

The first stop is Bradley’s parents’ house which ends up being a dead end after Batgirl discovers a Santa costume filled with raccoons left by Harley on the roof. The next stop is a local charity that Bradley once volunteered at to impress a girl. This is also a dead end as all they find is an exploding turkey in the oven that has been left by Harley. The last stop is a church where Bradley once featured as Joseph in the pageant. This is another dead end as all they find is a rampaging camel.

Batgirl eventually figures out that Harley is back at the club because Harley would believe that the reason for the season is getting presents. The group arrive back at the club to find an uncooperative Harley sitting on the roof. She is forced into dropping the antidote into Alysia’s hands and runs off before Batgirl can apprehend her. It turns out that Bradley didn’t learn a thing from the whole episode and is just as narcissistic as ever. Batgirl goes off with her friends to enjoy the rest of the night and Bradley’s employees all quit their jobs together.

Analysis: This story is a one and done story for the holiday season. I started the issue expecting a light and enjoyable story, but instead I quickly realized that the story didn’t really make any sense. I tried reading it again to see if I could just focus on the emotion and fun in the story, but the plot holes are just too big to ignore. Setting aside the fact that Barbara Gordon can go from the shower to being on the street in full costume in a matter of seconds, the whole incident with the Wrapper has no impact on the main storyline. In a one issue story, every page is valuable and I don’t really understand why that event needed to be included. There appears to be a bit of humor in it when Batgirl sings the Batman parody of the Jingle Bells song while tying up the Wrapper. However when I thought a little more about it, I realized that the song is most closely associated with the Joker and, given Barbara’s tragic history with the Joker, it didn’t make sense why she would be singing it.

Other major parts of the plot don’t really make sense either. Harley’s motivations for crashing the party are flimsy at best. Her plan to make Bradley learn the reason for the season is even more shaky. I have no idea how Harley could have predicted where exactly Batgirl and her friends would go and left something behind at all the dead ends. I also don’t recall when Alysia found out that Barbara Gordon was Batgirl, but she is in on the secret here. There doesn’t appear to be a solid conclusion to this issue as Harley just leaves at the end and Bradley learns nothing.

While I’m critical of the plot in this issue, I think that Larson has really captured the individual voices of all the characters who regularly appear in the Batgirl title. The dialogue between Barbara, Alysia and Frankie doesn’t feel forced or contrived at all. This allows the reader to really feel like they are part of the friends’ conversations. It also ensures a continuity in how the characters are depicted from issue to issue with no drastic and unexplained changes in a character’s voice.

This is the first time I’ve come across Sami Basri and Jessica Kholinne’s work and suffice it to say that I am a huge fan. Basri’s artwork is sublime, the design of the character’s costumes and outfits are clean but also detailed. The facial expressions and hairstyles are also very strong aspects of Basri’s art in this issue. The full page panel of the hipster bar with all the decoration and lighting is an image that perfectly encapsulates the holiday spirit. Kholinne’s colors deserve special credit there and throughout the issue for making the characters jump off the page. I also enjoyed the panel where Batgirl punches the Wrapper in the face. The “whirl” background leads the eye and adds a lot of power to the punch as it focuses right at the point of contact. I would absolutely love to see more of Basri and Kholinne’s work in the DC titles in the future.

Final Thoughts: In my opinion, this is a holiday issue that can’t overcome the plot holes to deliver the light-hearted fun and holiday spirit that comes naturally to this collection of characters. However, the gorgeous artwork and colors give the issue a huge boost and is definitely worth a look.