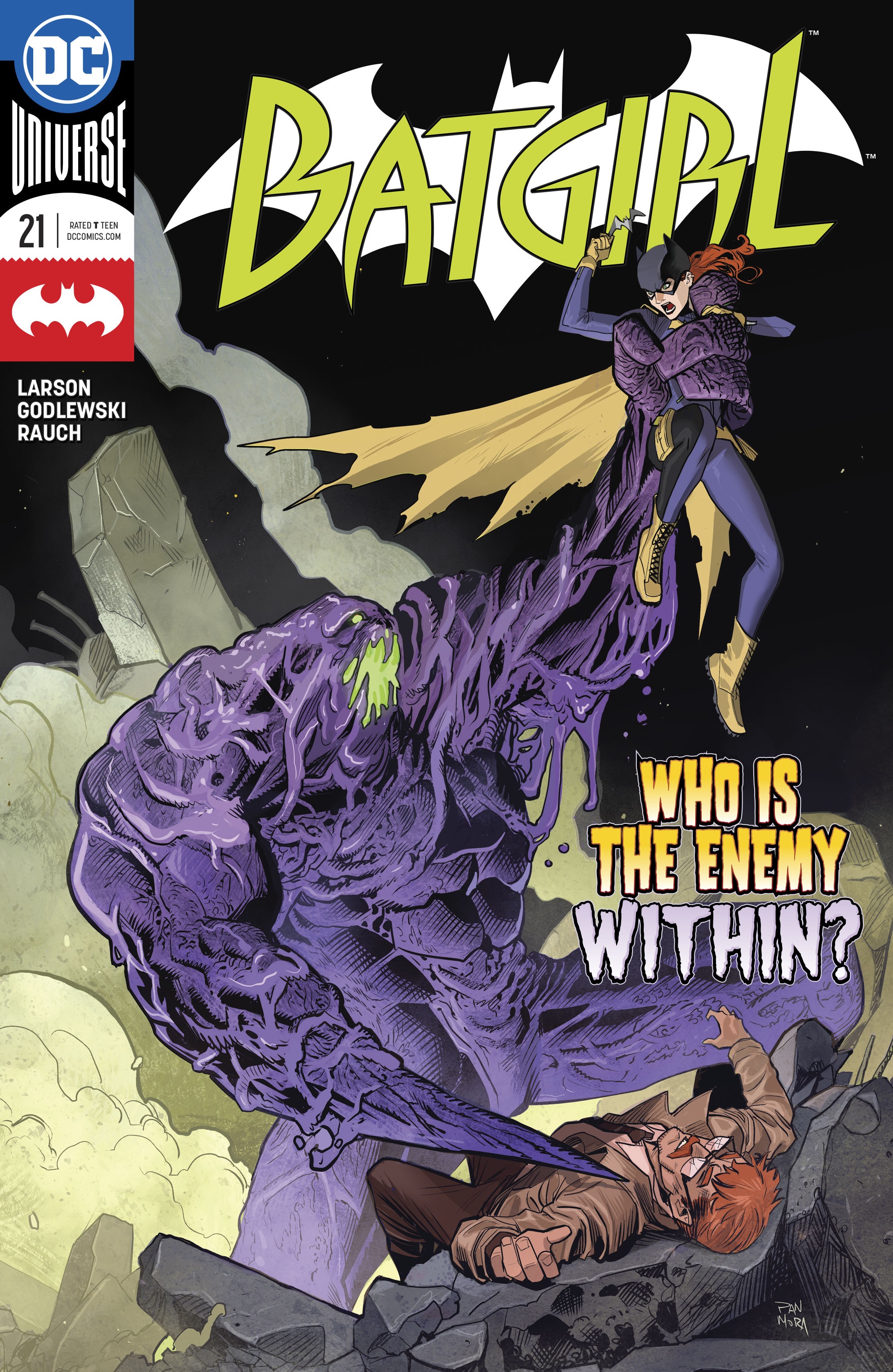 Overview: Batgirl solves a mystery with the help of Commissioner Gordon. The Father and Daughter team up (unbeknownst to her Dad) to figure out why a series of women have mysteriously gone unconscious in their bathrooms.

Synopsis (spoilers ahead): A Burnside woman, Claire, is doing her evening bathroom routine which includes a Bio Glass facial scrub. Her boyfriend, Paul, is in the bedroom chatting with her. Suddenly she screams. She has gone unconscious and is sent to the hospital in a coma. Batgirl arrives with a member of the GCPD. Apparently, this is the fifth woman to go unconscious. Paul describes what he saw in the bathroom – a giant blob had seemingly surrounded Claire. Batgirl finds the tube of Bio Glass and realizes that she has seen this product at some of the other crime scenes.

Bio Glass is made in a nearby apothecary and Batgirl breaks in during the night. She hears a man entering in the back and gets ready to fight, but it is Commissioner Gordon (shhh – her Dad). He is investigating the clue about the beauty product as well. They find that the product is made by Green Sun Biotech.

The pair pays a nighttime visit to Green Sun Biotech factory. They find that there is some kind of living organism that they are putting into the scrub. Jim Gordon gets a sample to have analyzed.

Batgirl goes to Gotham Hospital where Jim brings her the test results. Luckily Claire is clear of any biohazard. However, Green Sun’s owner’s previous business was Burnside Genomics and was found to be illegally dumping hazardous waste into the harbor. The two visit the former location of Burnside Genomics. Batgirl postulates that the chemical dumped in the harbor has come alive and is attacking Gotham residents through the sewer and plumbing systems. The creature senses the ingredients in Bio Glass coming down the drain and follows it to its source.

The two go to GCPD where they pour Bio Glass from the evidence lockers down a drain. Jim is almost immediately covered by the Goo Monster. The creature is able to morph and resist her attempts to free her Dad, the Commissioner. She is able to break through the creature’s protective shell and pour some cleaning solution into its interior. The creature explodes freeing pater Gordon. Batgirl goes to take a piece of the creature for analysis but Gordon says it is evidence. She protests and he gives in saying that she reminds him of his daughter.

She didn’t really want the blob for analysis but puts it into an aquarium as a reminder of a day she spent with her Father. She then gets a text; it is him asking her to dinner.

Analysis: On one level, Hope Larson’s one-shot story is very vanilla. It is a quick little mystery that doesn’t seem to have very high stakes. Batgirl and the Commissioner break into a series of factories looking for clues and finding and quickly defeating the threat. On another level, however, this is a very satisfying family story that goes to the heart of Batgirl’s secret identity. It was cool seeing Bab’s internal dialogue thinking about working in this way with her father, whom she clearly admires. When Gordon compliments her bright mind saying that she reminds him of his daughter, her face almost glows with happiness. This is a very satisfying little story for those who can be enticed by a small relationship tale versus a punching and kicking plot.

Scott Godlewski is on art, John Rauch on colors, and Deron Bennett did the letters. The book looks clean and tells the story effectively. I wouldn’t say it is a gorgeous comic, but it gets the job done. The star here is Bab’s occasional smirky facial expressions. There are a few panels where her facial proportions and angles seem a bit out of whack, but it appears to be done for effect.

I enjoyed this story very much, even though it was a quiet little tale. I like it when Batgirl has to work with her Dad, although it is unrealistic that her father doesn’t recognize his own daughter. There isn’t ever any danger of the pair having the status quo upset, which might have been a missed opportunity. However, this is a solid feel-good tale.

Final Thoughts: Batgirl teams up with her father, Commissioner Gordon and the two solve a crime together in an emotionally satisfying one-shot story.