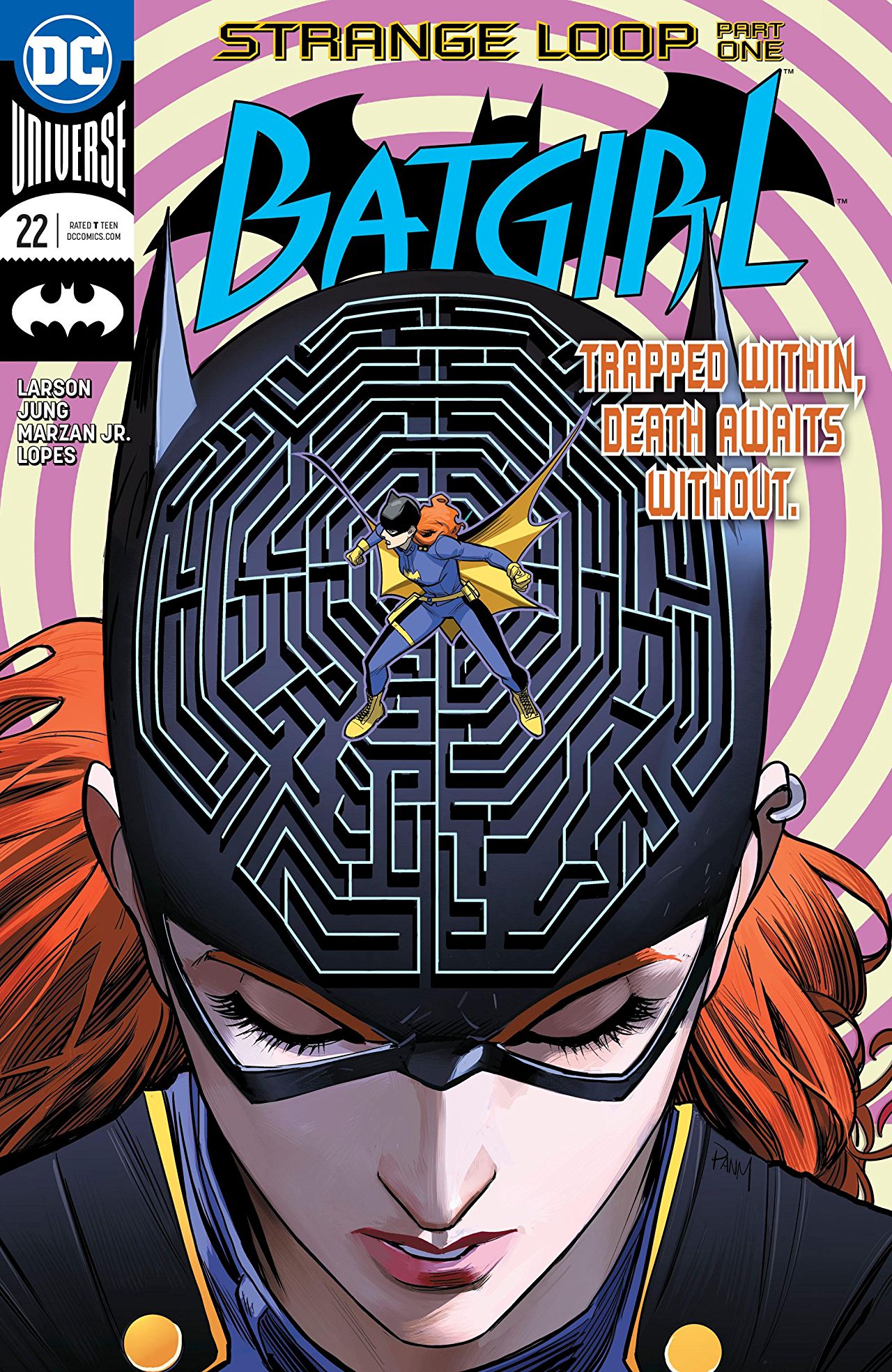 Overview: Batgirl revisits some of the people and issues from her recent past in what turns out to be a surprisingly present danger.

Synopsis (spoilers ahead): Batgirl interrupts a man about to assault his wife in their swanky Gotham apartment. He accuses the woman of taking his children away from him. He goes to shoot his wife with a weird ray gun but Batgirl uses her cape to block the electric bolts. Batgirl knocks the man to the floor while his wife and children escape the apartment. The GCPD arrive to take the man into custody and Batgirl rope-swings away.

The next day, an exhausted Barbara Gordon goes to the Burnside farmers’ market with her friend Frankie. She notices that everyone looks vaguely familiar. She sees her old friend Kai who says he has been building furniture since he got back from China. The two go out to dinner where Kai hints he is looking for a girlfriend. Babs deflects his gentle advances. She says that she feels like she is stuck in life.

At Burnside College, Barbara thinks about starting her MMA training again. She goes to look into a gym to train at when she runs into her old friend May Hao, the MMA fighter she knew from her adventure in Asia. She too has returned to Burnside. She says that there was a training accident back in Singapore where a girl was badly hurt, which forced her to return to the U.S. The two go to the gym to spar.

In the locker room, Babs notices that May has gotten very physically fit since the last time she saw her. There is also a wound and bandage on her arm. When asked about it, May says it is a birth control device. Babs goes to look at it because it looks infected but May throws her against the lockers and cancels their friendly sparring session.

Babs senses something is afoot so she gets Batgirl’ed up and follows her ripped friend. May goes to the bad side of town and enters an unmarked warehouse. Babs follows her in to find an operating room and performance-enhancing drug implants. Batgirl stumbles onto a secret fighting ring where her powerfully built friend is laying a beatdown on someone. Batgirl jumps into the ring to stop the fight. One man in the crowd uses a raygun to provoke May into attacking Batgirl. Babs goes on the defensive to try to wear May out but is hit hard in the face and knocked across the ring. She finally passes out.

In a dream, Batgirl imagines herself on a couch with her other friend from her trip to Asia, the aged Fruit Bat. Fruit Bat tells her that what she is experiencing isn’t real, that she is actually still in the Gotham apartment from the beginning of the comic where she got zapped by the ray gun. The effects of the gun are causing the hallucinations she has experienced since. Her feelings of being stuck and trapped are real because she is in on the apartment floor and can’t move. Fruit Bat says that if she doesn’t wake up, she will die. Until next month…

Analysis: Writer Hope Larson sneaks us a curveball with this story that shows Barbara Gordon’s heroism as well as some of the things that have been troubling her. In what turns out to be a hallucination, she meets people from her recent past and rehashes some issues. She is clearly in a period of reflection in her life and it feels real.

Pencils are by Minkyu Jung, inks are by Jose Marzan, colors by Mat Lopes, and letters are by Deron Bennett. The drawing style is simple and attractive. The colors vary from rich purples, mustards, and oranges to more austere taupes. Barbara’s red hair always lets us know where she is in a scene.

This story worked for me and upon rereading the text, knowing Batgirl was hallucinating, you could see the clues that were easy to miss the first time through. A certain “Sixth Sense” thing. It worked for me.

Final Thoughts: A good story that puts Batgirl in real danger but also shows us a Barbara Gordon revisiting people from her past.