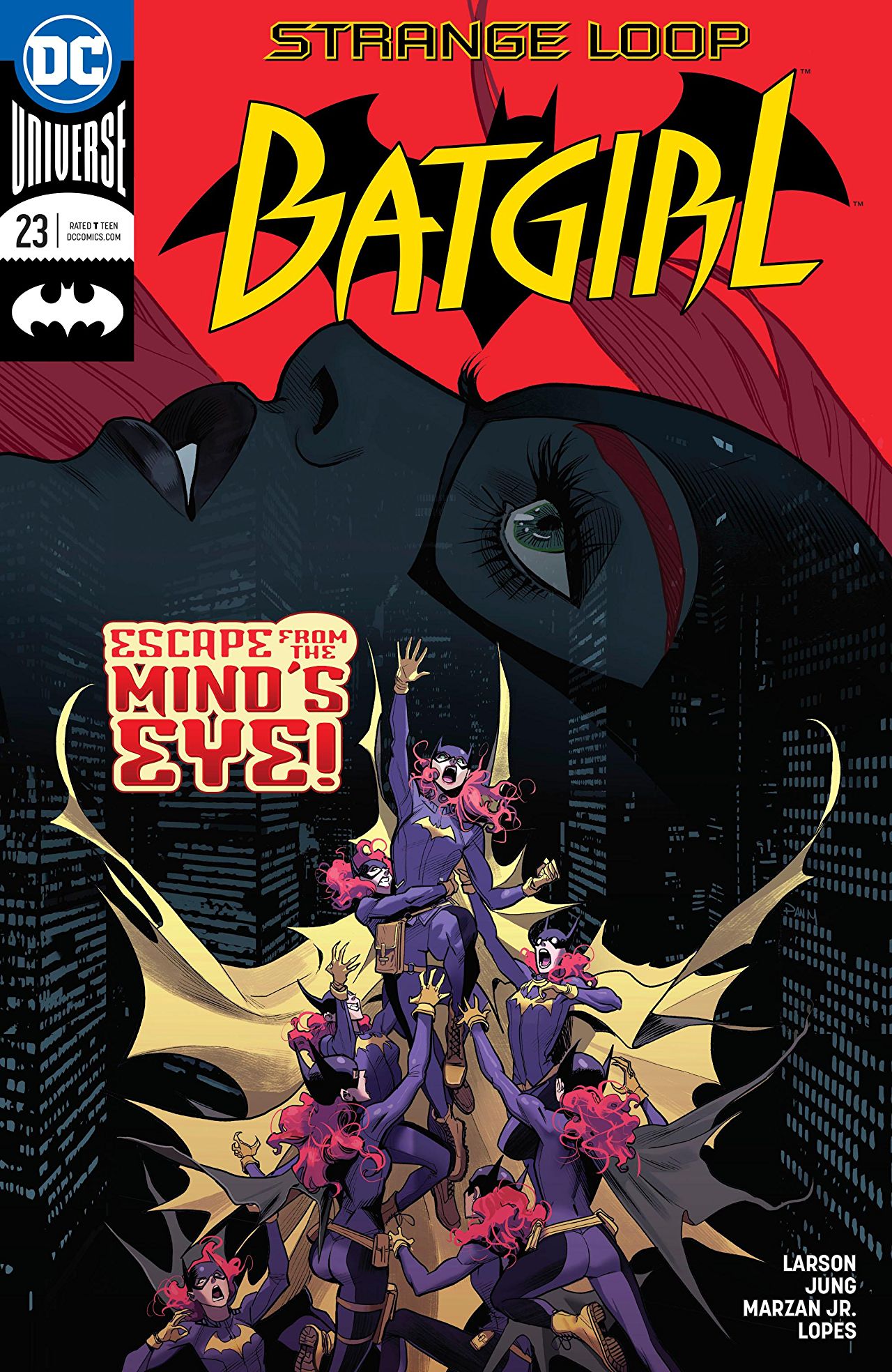 Overview: Batgirl attempts to break the hypnotic state she has been put in before she is trapped in her mind permanently.

Synopsis (spoilers ahead): Batgirl is watching her body fall to the floor of a swanky Gotham apartment where she had been zapped by a strange ray gun. She is trapped in the dreams of her past, only an image of Fruit Bat is there to guide her through the illusion.

Perhaps dealing with some of the situations from her recent vision is the way out of the spell. She thinks back to her dream of fighting her old friend May Hao and another woman who has also had their physiques medically enhanced. She goes ahead and fights them and, using a doodad or two from the ‘ol Bat Belt, defeats them. She takes the pair to the hospital to recover from their chemical infusion.

Nothing. She remains in her mental prison.

Maybe if she meditates in her dream world that she can break through to the real world. She almost is able to break through but her mission of protecting the woman and her kid distracted her from completing her task.

She gets a call from her father, Commissioner Gordon who tells her that he has been kidnapped and she should go to a certain PO box and take the contents to his kidnappers. She realizes that her father would never do that and this is the dream-world attempting to use her protective instincts to draw her more deeply in.

Her phone auto traces all her calls and she goes to the abandoned subway station the call came from. There she meets the pink haired sixteen-year-old Martina Falcone who has kidnapped Gordon. She says that she knows Batgirl is Gordon’s daughter and she wants Batgirl to train her or her father will be killed.

Barbara reasons that the only way out of this hallucination is to act the opposite of what she would normally do.  She abandons her father, makes herself sexy and visits her friend Kai’s woodworking shop. She says that she wants to abandon her life of crime-fighting as Batgirl and run off with him. She feels the spell begin to fade and when she finally kisses Kai the artifice collapses and she is back in the Gotham apartment living room protecting a woman and her child from her husband.

She faces off against the man and disables the weird ray gun. She then fights him a bit. He is ultimately taken down by his wife with an acoustic guitar to the head.

After all the action, Babs reflects on some of the things she has been going through and is optimistic about the future.

Analysis: Writer Hope Larson wraps up her run on Batgirl with a solid story that requires Babs to investigate her own psyche to escape a mental trap. This is executed in a way that keeps to a certain logic, is understandable, and makes a reasonable amount of sense when she is able to manipulate and break from the prison of her false reality. This is a complicated story told simply and understandably by Larson.

Pencils are by Minkyu Jung, inks are by Jose Marzan Jr., colors by Mat Lopes, and letters are by Deron Bennett. The characters are drawn simply but we are never confused as to who is talking. Most colors, with the exception of Batgirl’s outfit, are earthy tones. Even the purples have a kind of ocher quality. It is a pleasing look and serves the story well.

This is the last issue of Hope Larson’s Batgirl run. Overall I’ve liked it, while it isn’t a standout series I believe it is a worthy successor to the original Burnside run while still slowly progressing Babs as a character.

Final Thoughts: A well thought out issue of Batgirl trying to overcome a mind control weapon. She uses different tactics and plays against type to break free of her mental prison.