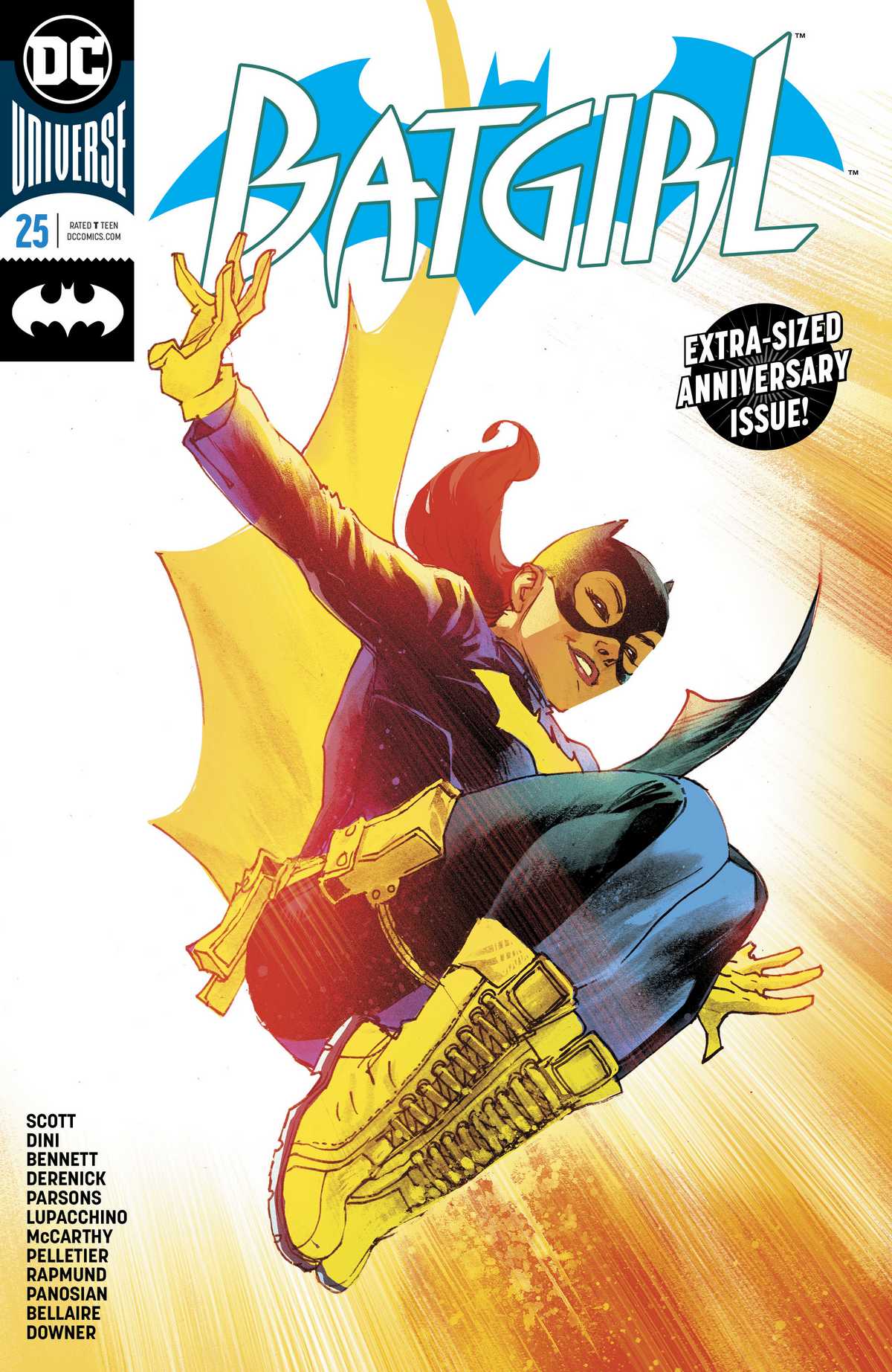 Overview: A group of interwoven Batgirl tales are in store for you, dear reader. See Barbara fight bad guys, save good guys, and take some time to herself.

Batgirl attends the funeral of a man that she had saved a few months previous. He had acted bravely and intelligently to help save some children visiting Burnside College during a Scarecrow attack. However, sometime later he was killed by Joker. Batgirl tries to pay her respects without anyone knowing, but the man’s mother sees her and talks with her. Batgirl feels guilt over his death but his mother is happy that she had some more time with him and tells Batgirl that she looks tired.

After she leaves the church she calls Dick Grayson and asks him to meet her. He has just the spot, the hotel suite that Alfred reserved for Bruce and Selina’s honeymoon, which is not needed since their wedding didn’t happen.

The two get together in the big luxurious bed to Netflix and presumably chill. Babs talks through some of the issues she has being who she is. She has always been very different from other girls and Dick reassures her. They talk about what they imagine their married lives might be like someday and realize that there is something between them that is unique in their lives.

They cuddle and fall asleep and Babs knows that Dick will always be there for her.

A week later Batgirl is riding through the rich, leafy part of Burnside on a tip. There is an art thief on the loose. She finds a house that she believes is a target and breaks into the empty master bedroom. She detects that the occupants heard a noise in the night and the man went to see what it was. The wife followed. There is blood. The blood came from the two dead people on the couch. Batgirl is too late.

The perpetrator wrote his name on the wall in their blood – “Grotesque”. Grotesque is a masked bad guy who has been stealing art from the Burnside rich, killing them, and posing them in ‘artistic’ positions.

Batgirl hears him start his motorcycle engine and runs out to stop him from leaving the scene. They fight. He gets away but not before she can get a tracking device onto him.

This story will be continued in Batgirl #26.

Batgirl fights off some people dressed up as animals. A woman in a rabbit costume came to a rich man’s party and gassed the guests to make them do whatever weird thing she wants them to, in this case, dress up as animals.

Turns out, the perpetrator is none other than Mad Hatter’s girlfriend March Harriet. She wanted to get into Mr. Warren’s safe but decided to have a little fun first. She realizes she is caught and sits and waits for the police.

While they wait, March Harriet tells about how she met Hatter and some of their exploits try. Friends are killed, minds are controlled, all in a day’s work for Gotham’s crazed criminals. Barbara realizes that March Harriet is just playing for time and that Mr. Warren is locked in the safe and running out of breathable air. Warren had a part in the death of March Harriet’s friend.

Babs saves Warren but also assures everyone that he will pay for what he did. March Harriet gets away before she can be taken into custody. The End.

Analysis: The Reason, by writer Scott, exposes where Barbara Gordon’s head is right now. The story is a little too strident, but effectively shows the heroic nature that is innately in some people, even in Gotham City and the ways that others can move on from their loss.

There are some nice moments. The scene where the grieving mother calls Babara, Miss Batgirl is charming. The artist’s rendition of the church glows in some gorgeous panels. Also, the way Babs is depicted, sadly sitting on the floor of the choir loft beautifully expresses her sorrow and presents to us a woman at the end of her rope. Nicely done.

In Hopeless Romantic we are given mostly dialogue between Babs and Dick from beginning to end. This doesn’t sound too exciting, and it has many moments that pushed the boundaries of my personal gush-gush limits.

But it is also adorable. We see some of the internal workings of the well-shipped Dick and Babs’ relationship. When the pair is in sync they have a wonderful chemistry and we should be ashamed of ourselves for peeking in and wanting them to fight someone. Give ‘em a break already.

Dick and Babs are drawn and colored as impossibly good looking and charismatic. It all reminded me of a lovey-dovey bed scene between Stephan and Elena in Vampire Diaries season 1. That is not a criticism in any way, I love that stuff. If you think that kind of scene can be interesting like I do, you just might like this sweet little morsel.

And who wouldn’t love Dick Grayson calling himself a millennial? Where has the time gone?

Value is a more traditional detect, solve, fight story and appears to be the one we will be following going forward. The motorcycle helmeted bad guy doesn’t seem too interesting other than his artistic way of killing which is a lighter weight version of what Gala from Mother Panic does. So far it is a bloody but fairly straight-forward story. We will have to see how good a bad guy Grotesque turns out to be.

The art clearly tells the story which is particularly well done when Babs is detecting what went on in the bedroom during the break-in. We see the ghostly figures of the occupants as they move to their eventual death. Well done.

Finally, March Madness offers a simple and light-hearted story of Batgirl having yet another chatfest. This time she hears of the meet-cute of Harriet and Hatter. It causes the reader to want to root for the poor mistreated woman so when she eventually gets away it doesn’t seem so bad. Good for her. Babs will get her next time.

All in all, these were fairly slow paced but illuminating story nuggets. There is the beginning of our next story arc, but also some insight into what our hero Babs might be working through in upcoming issues. We’ll see.

Final Thoughts: This book is a number of short stories that serve to show the emotional state of Barbara Gordon. Also, a story arc is set in motion.