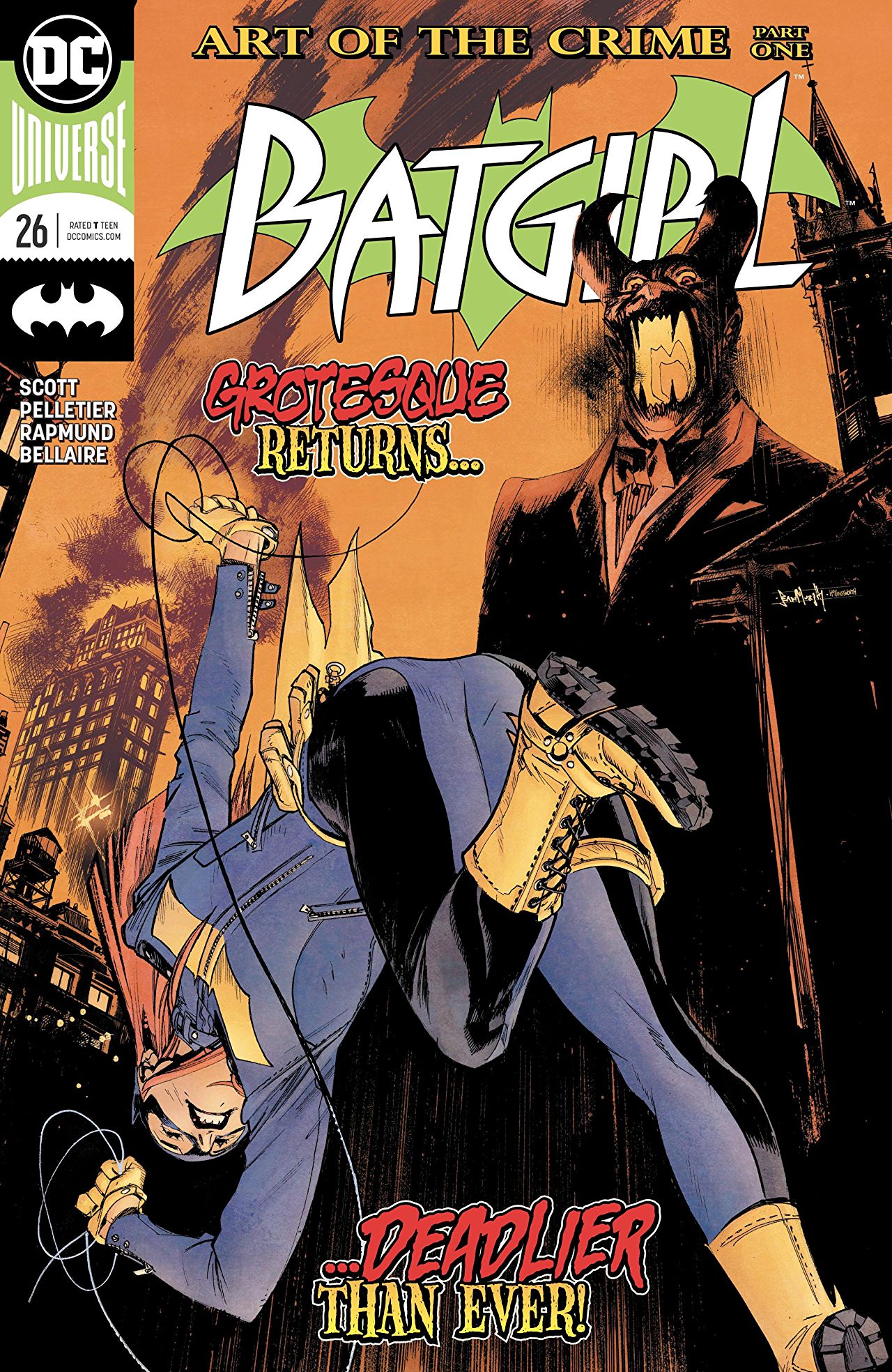 Overview: Batgirl chases the serial killer/thief Grotesque to try and stop his murderous rampage. But things can go wrong even for a superhero as well prepared as Batgirl.

Synopsis (spoilers ahead): Batgirl chases Grotesque on a motorcycle through Burnside traffic. Grotesque has stolen a Da Vinci artwork and murdered the previous owners in a disturbing fashion. As they race, Batgirl’s suit tears, exposing her skin.

Grotesque had been a run of the mill bad guy until he was released from Blackgate. Something happened to turn him into a killer that arranged his victims to look like works of art.

Grotesque stops outside a fancy hi-rise building. Babs calls in the GCPD. Grotesque takes a hostage but Babs frees him and the two fight. Exposed by her torn Batsuit, she gets zapped by his electric charge and recalls that after the events of The Killing Joke she is only able to walk because of a computer chip implanted in her spine. She is able to continue to fight but she gradually loses control of her body. He heads up in an elevator and she goes to stop him. She begins to go in and out of consciousness. Somehow she has reached a great height and she begins to fall. She uses a bat-rope to slow her drop but isn’t able to stop herself from plunging into the river.

She seems to recall being in a room but can’t put the pieces together. There were blueprints, explosives, and guns. But the details are hazy.

She looks up to see a great explosion at the top of the building which presumably destroys all the evidence. The fire department has arrived but not the police. Why didn’t they come when she called them?

Later that day Barbara heads to GCPD headquarters to, as she says, visit her father. In reality, she wants to download computer data to get information on Grotesque. While she is waiting she meets a detective named Evan.

Her father arrives and they briefly talk when Babs begins to feel woozy. She passes out as Jim Gordon calls for an ambulance.

Analysis: Writer Mairghread Scott lead us through what at first appears to be a simple motorcycles-in-traffic chase that ends up having much more dangerous implications.

In this issue of Batgirl, we are reminded of Babs’ experience in The Killing Joke. We get references to that incapacitating incident including a panel showing a portion of the iconic image of Joker holding a camera. We are reminded of the chip in her back that keeps her on her feet Batgirlling.

I am not a fan of The Killing Joke. But I love that Barbara Gordon became Oracle. So are these callbacks to TKJ and a disrupted back chip hinting at the potential for that to reoccur? I don’t want anything bad to happen to Barbara. But is a change in Barbara Gordon’s status situation being teased? This activates my Barbara Gordon Character Development Antennae.

The art by penciller Paul Pelletier, inker Norm Rapmund, colorist Jordie Bellaire, and letterer Deron Bennett find a way to clearly tell a story that has a lot of physical details, like the tearing of the Batsuit, and the race through the Burnside traffic. These portions contrast to the abstract approach when Babs is blacking out. Different time periods of the book are colored differently. Modern day has pretty violets, a flashback is in red tones, happier memories are dominated by the hair shade Gordon Red.

The page of Barbara getting shocked is powerful. Her subsequent loss of control of her body was shown effectively. I could really feel her inability to coordinate her body. I also particularly liked a panel of Barbara’s face looking upwards as she is falling off the building. Great looking art.

Final Thoughts: Overall, if I wasn’t reviewing this title I would still want to be reading it. Barbara Gordon gets into trouble. The stakes are high and writer Mairghread Scott’s Batgirl has my attention.