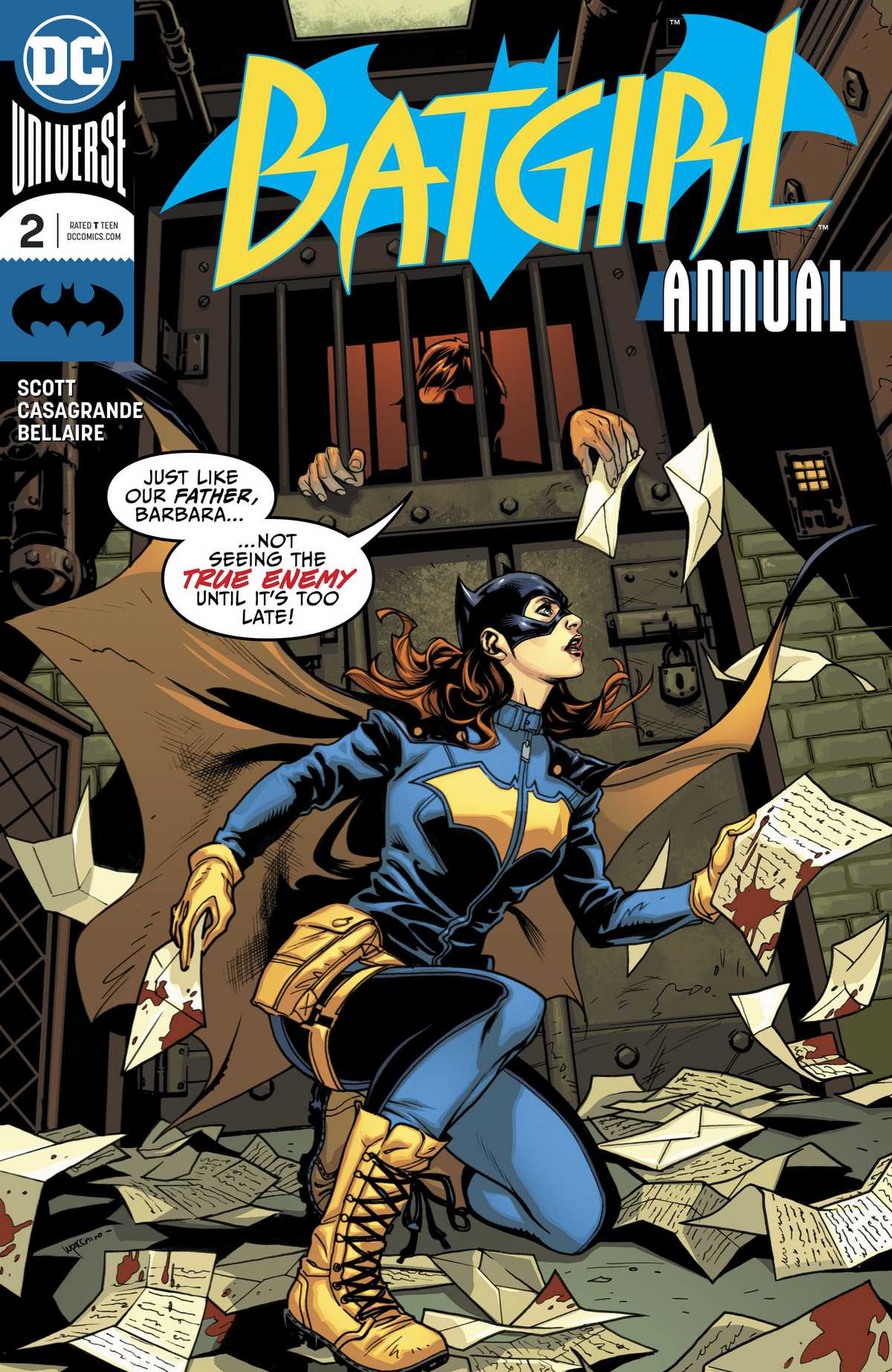 Overview: Batgirl investigates a crime that has a familiar pattern, that sends her to Blackgate Prison to see her brother the serial killer. Barbara journeys through their past to interpret events in Batgirl Annual #2.

Synopsis (spoilers ahead): Batgirl investigates two murders where the victims have identical sets of knife wounds. They were otherwise completely unrelated. Barbara realizes this was also the wound pattern that her brother, serial killer James Gordon Jr., used.

James Jr. couldn’t have actually committed the crime since he was in the Blackgate High-Security Psychiatric Prison lockdown at the time. Barbara goes to visit James to see if he knew what was going on with the copycat murders.

The two siblings reminisce about their interpretations of the good old days. James always felt eclipsed by his sister. And so turned from a loveable scamp to a twisted mass murderer.

She asks if he has any idea who might be committing these crimes. He suggests that she look into some of the women that have been sending him love letters. Some of these pen pals could be unsettled enough to do something for real. He turns the letters over to her.

Barbara investigates a few likely suspects but comes up empty. She then realizes that someone capable of this kind of crime wouldn’t expose themselves with a letter. She checks her brother’s visitation schedule and finds a likely suspect, Meredith.

Batgirl visits Meredith and confronts her in her home. Meredith pepper sprays Batgirl but Babs subdues her. Meredith says that her brother James is the one that found her to commit these crimes.

She visits James again and they rehash old grudges. Babs leaves disgusted and we see that James is writing to people telling them he has found out something illegal they have done and that if they don’t want to get caught they need his help. Sneaky and creepy.

The story has obvious parallels to the Silence of the Lambs, with James Jr. in the same kind of psych ward as Hannibal Lecter. This story, thankfully, has less gruesome murders without sacrificing an interesting mystery. The gore factor is very low. The story is made disturbing by the different types and degrees of madness that a lot of people we see here have. I much prefer the tone of this comic than the more visceral books.

In this annual, Babs’ descends into a horror-tinged detective tale. As she investigates different aspects of the case and interacts with people we get short profiles of a few characters that are presented efficiently and are engaging. One woman goes from being a suspect to being a padded cell inmate over the course of two pages. And we get a glimpse into her interesting life story.

The art is by Elena Casagrande, colors by Jordie Bellaire, and letters by Deron Bennett. There is terrific color work here. In one scene Batgirl is descending a rope silhouetted by street lamp lit fog behind her. It glows beautifully. The colors and art style changes effectively when we get flashbacks to Babs and James’ lives. There are also a few portraits of Barbara that show her as decidedly older and wiser than she originally was when she came to Burnside.

I hope Scott and team do well on the main Batgirl title. This well executed, complicated, intimate story is a good sign of things to come.

Final Thoughts: Barbara Gordon investigates murders that lead her to her serial killer brother James. This is an effective, creepy adventure among insane people with Batgirl solving copycat crimes.