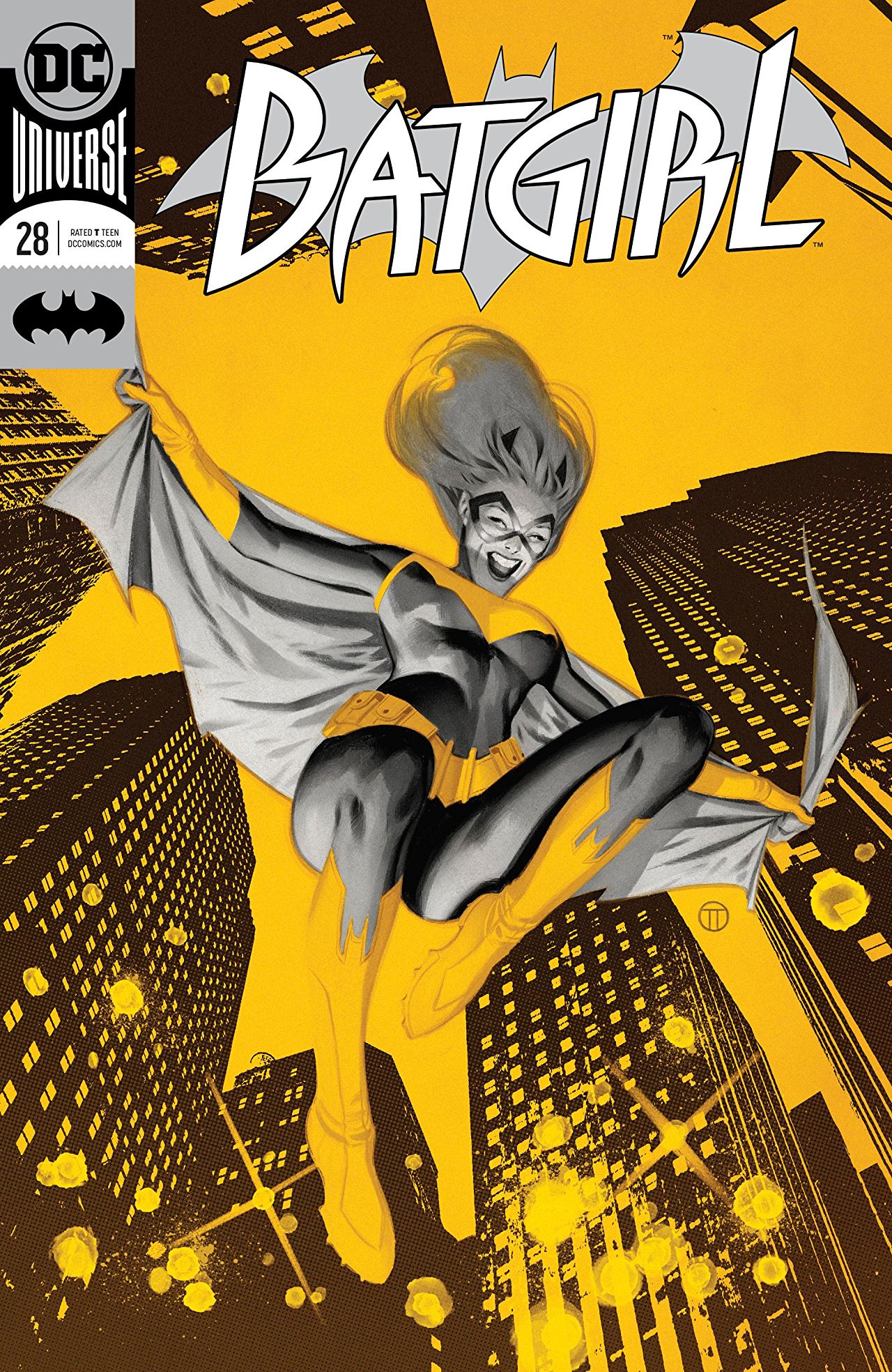 Overview: Barbara escapes the grasp of a GCPD detective with more going on than meets the eye and continues searching for Grotesque and Wyrm. She finds a danger to both Gotham and her family.

Synopsis (spoilers ahead): Detective Evan Douglas, of the GCPD, accuses Batgirl of killing Phillipe Rianne AKA Grotesque. Batgirl knows that Phillipe wasn’t Grotesque and is certain that she didn’t kill him. Her case is undermined by the Batarang in the heart of the deceased. To expedite solving the crime she escapes custody and goes in search of clues.

Batgirl knows of the organization Grotesque mentioned: The Dark Web. She tries to get hints about the group even though her legs are becoming more and more unreliable and her vision is giving her trouble due to her recent injury.

Detective Douglas sends the uniformed cops out to look for her but to also focus on Operation Swap Meet, whatever that is. Alone, Douglas gets a visit by an incorporeal vision, Wyrm. Wyrm used his Phantasm Technology (Pat. Pend.) to make the other cops think Batgirl was a murderer. Douglas, who is actually Grotesque, has some behavioral issues which are unfortunate because he has a supportive and sweet wife who loves him.

Babs returns home to find her father, Commissioner Jim Gordon, waiting for her. The pair has a heart to heart where she says she felt he was embarrassed at her weakness during her time in the wheelchair and how the effort she put into her physical therapy was driven by the disapproval she perceived. He says he didn’t handle things perfectly but he has always been proud of her. He would be happier though if she took some time to heal after her injuries. She, in turn, promises to.

Jim heads out to a swanky party, while on duty, in an art gallery. Babs tries to rest and relax but decides to head over to the Clock Tower to do some computer sleuthing. She figured that Wyrm had used a hologram to make it look like she killed Phillipe and that Douglas might be a part of things. She has a copy of his computer and finds suspicious activity on it. She realizes that Douglas has been compromised by Wyrm and that the art gallery party is part of Grotesque’s plan. The real art from the gallery has been stolen and replaced by frauds. Also, she deduces that the fake art will be destroyed somehow which will cover up the thefts.

Finally, she realizes that her father is at the gallery now and in danger of getting in the crosshairs of the plot. She races to the gallery and it dawns on her that Douglas is part of the plot as a man on the inside.

Analysis: There is a whole lot to like in this issue of writer Mairghread Scott’s Batgirl. This is a very high stakes plot, with Barbara’s health in the balance. The Grotesque/Wyrm alliance is shaky but certainly dangerous. The characters are given some dimension such as Douglas with his wife.  I liked the idea of Barbara’s reconciliation with her father, though the conflict of her feeling like he was ashamed of her did seem a little forced.

Barbara does some good detecting and there is an effective narrative telling how she is figuring out the uber-plot with the art.

I’m not totally clear on what Wyrm is. Is he a tech creation or a spirit? It sounds like he is a hologram run by an actual human somewhere in Gotham. (editor’s note: see Nightwing #44-47 for more information about Wyrm)

Amazingly there is actually an editor’s note explaining Dick Grayson’s condition from Batman #55 and Nightwing #50. Glad the editorial team is keeping everyone in the loop.

The pencils are by Paul Pelletier, inks by Norm Rapmund, colors by Jordie Bellaire, and letters by Deron Bennett. The panels are rich with foreground and background detail. There is a panel of Batgirl swinging through Gotham that shows a very attractive view of some city rooftops that almost look like they were in a faded old photograph. Wyrm is depicted as a skull-like creature surrounded by green swirls with some Kirby Krackle mixed in. I also loved the Gordons’ matching hair color, Jim’s mustache is a particularly good detail.

Final Thoughts: This is a better than solid story arc by writer Scott with attractive art. I am thoroughly enjoying this title and look forward to the next installment.