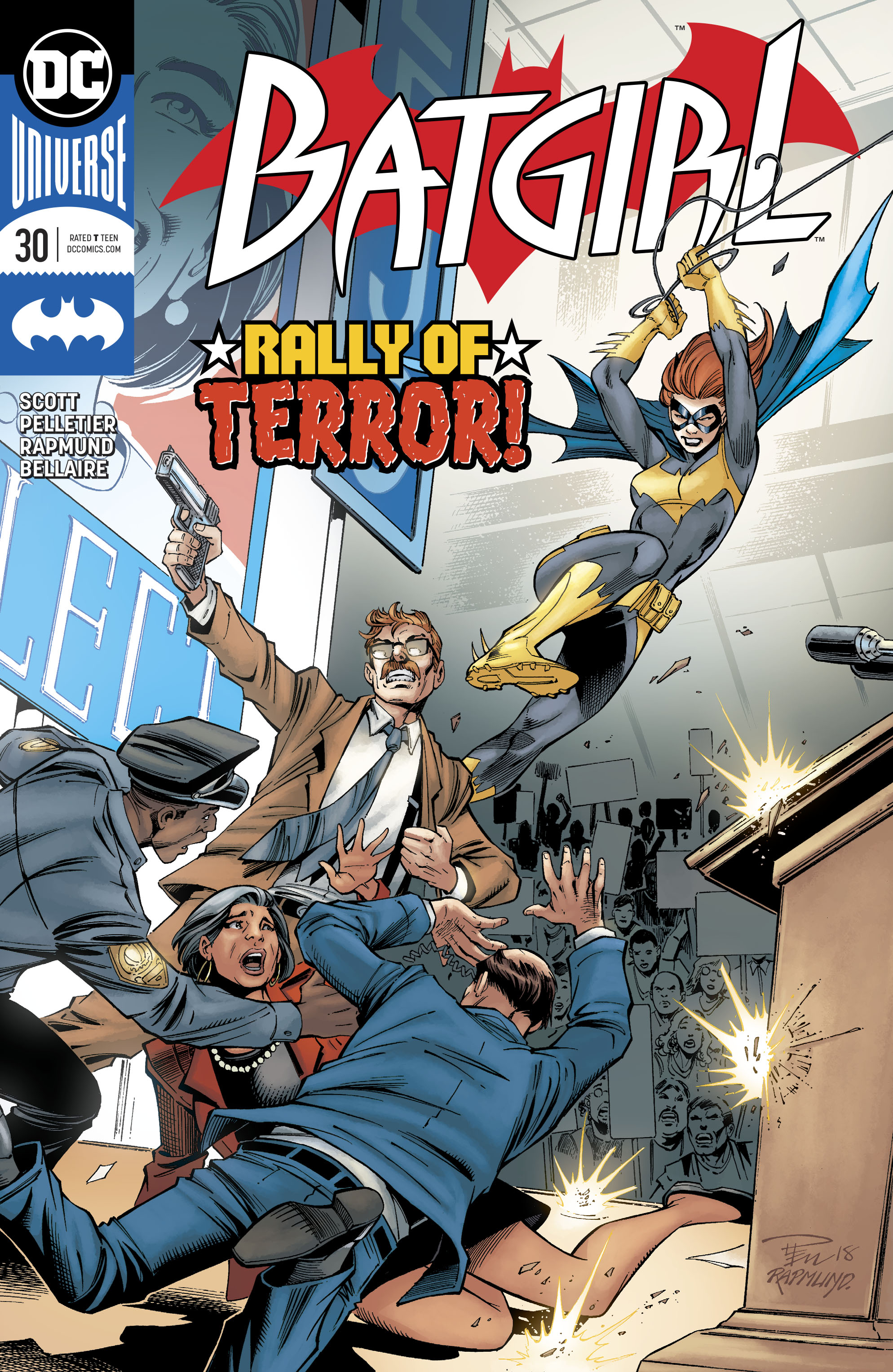 Overview: Barbara Gordon gets involved in politics to track down some Gotham troublemakers including someone from the past as a new story arc kicks off.

Synopsis (spoilers ahead): Barbara tries out her new back implants. Apparently, her mobility is now nearly tip top.

There is a congressional election taking place in Gotham. The challenger Ms. Alejo is using corruption at the GCPD as an attack against the incumbent Branson Moore. That’s what happens when you have a major art theft ring operating out of the GCPD, people question your commitment to law and order.

Alejo gives a speech condemning the GCPD to a crowd of supporters. Batgirl arrives hoping to keep things calm between the crowd and the GCPD riot police that surround them. In a nearby alley is a group of thugs hired by the Moore campaign that aim to cause violence which will be blamed on the Alejo supporters. One of these thugs is Jason Bard, cane and all.

Jason reminds the men that they are there to encourage others to fight, not fight themselves. The guys mask up and mix in with the crowd. Some of the more unruly thugs charge the GCPD line and fight with the cops. Jim Gordon and Batgirl arrive on the scene and calm things down. Jim suggests he doesn’t need the help of vigilantes to control Gotham.

Suddenly a bomb blows up and Batgirl gives chase to the perpetrators. The thugs make it to the getaway truck. All but one, the one with the bum leg, Jason Bard. Taken off guard by Jason’s appearance, Barbara lets herself get pepper sprayed by Jason who gets away.

In the morning, over coffee, Barbara and Jim disagree about the merits of a politician like Alejo. She suggests she wants to volunteer for Alejo’s campaign. Jim is outraged. Babs is outraged. Doors slam. Babs also thinks that if she is close to Alejo she can protect her from whatever mischief Bard has planned.

Babs goes to volunteer at campaign headquarters and finds Jason Bard in Alejo’s office. Bard points out she is Commissioner Gordon’s daughter, Babs points out he framed Jim Gordon to steal his job. Jason is trying to convince Alejo that if she hires him he can protect her from Moore and clean up the GCPD. He also mentions someone named Cormorant and she is shocked he knows the name. We see Cormorant, a tactical assassin with pictures of Alejo and Batgirl pinned to the wall.

Analysis: Mairghread Scott begins the second story arc in her Batgirl run in this issue. It is in many ways a setup installment. A scuffle, some accusations, a bit of intrigue. The characters are introduced and mysteries raised. It all has the feeling like it is working up to something bigger. This is what Scott did in the first story arc: the intensity builds steadily from the first issue on.

There are some interesting developments in this issue. Apparently, Barbara has had her back implants repaired. She is presumably getting healthier. Are her back problems in the past? Or will we see a resurgence of issues?

In this story, we get more conflict between the Gordons. The relationship between father and daughter is working out to be a central part of the overarching story and has been pretty effective so far. Here the pair have political differences. There is also a heartbreaking moment when Barbara, as Batgirl, forgets herself and touches her father too familiarly. He reacts negatively towards her, calling her a vigilante.  There is a sadness in that she has to hide a huge part of her life from him, a man she truly loves and respects.

We also get an appearance from Jason Bard who is sure to figure into this story. I’m not exactly sure which Jason Bard we are getting here. This story shows him as a loveable rogue with his characteristic limp, it works.

There is also a curious page where we learn that the stock of Barbara’s company, Gordon Clean Energy, is going way up. This feels like a setup, but is it something for this arc, or another?

Finally, I’m not sure what’s going on with all this Cormorant business. I don’t get much vibe off him in the one panel we see him in. But, that is also how I felt about Grotesque in the last arc and that turned out just fine. So I’m just going to go with it.

The pencils are Paul Pelletier, inks by Norm Rapmund, colors by Jordie Bellaire, and letters by Deron Bennett. They show Barbara/Batgirl in all of her personas: strong of purpose, personable, kind, not to be trifled with.  The art convincingly portrays her in all these guises.

One particularly good page starts in a claustrophobic panel where Jim chastises Batgirl from touching him. She is, in turn, shocked at her misjudgment. Then finally we see the bomb explosion, with the two in silhouette, coming at the moment of her shock. The art tells the emotional story very effectively.

Final Thoughts: Batgirl starts up a new story arc which shows her dealing with her relationship with her father, and political shenanigans. I am enjoying this run of Batgirl very much and will continue to rate it highly.