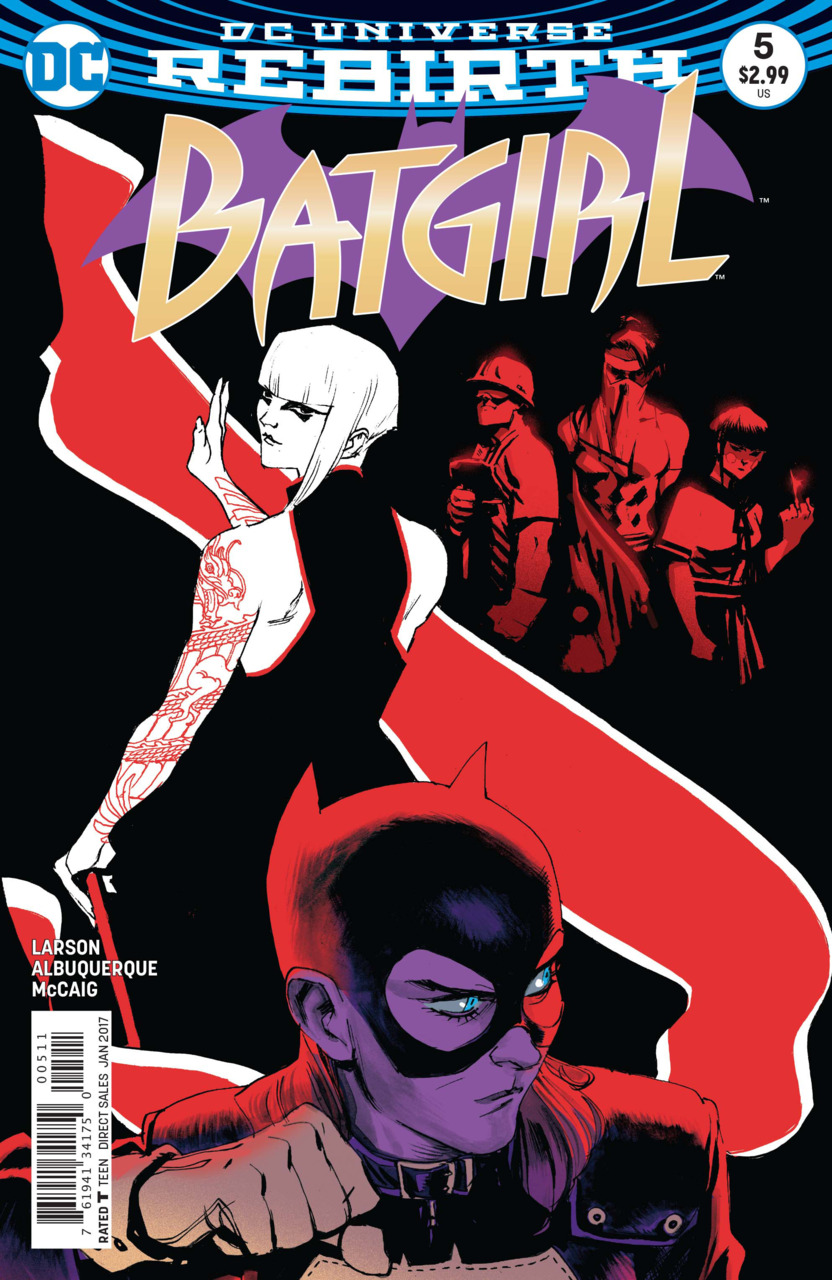 In Brief: Batgirl’s adventure Beyond Burnside comes to an exciting end, as she confronts the villainous Teacher and her own mind.

Summary (Spoilers): As Batgirl (Barbara Gordon) faces off against the newly bacterially enhanced Teacher, she struggles to hold her own against an opponent who can see all of her moves coming. Chasing the villain out of the window, Babs learns that Teacher was the daughter of drug sellers, learning her way around a lab by osmosis, but still failing to test into college and a better life. In revenge, Teacher has created her army of similarly disadvantaged youth, promising them enhancement so that she can gain the money and position she never had in youth. As Teacher’s hair falls out as a result of the enhancement, Babs tracks her, but Teacher knocks her out.

Unconscious, Babs’s mind searches for a solution through avatars of Fruit Bat as a young woman, and Kai. Her mind tells her to turn off her eidetic memory so she can use her full intellect in defeating Teacher. Doing so, Babs awakens and chases Teacher down, easily matching her with her mind undistracted with all of her past. Fortunately, as she ties Teacher up, it triggers a cue in her mind to turn her memory back on, leading to a huge rush of images and information.

Facing down Grandfather Blood, she refuses to turn over the enhancement bacteria, but gives them Teacher to save Kai’s life. Unbeknownst to the gangsters, however, Batgirl has led the police right to them. As she leaves, Babs sets up a school to give Teacher’s minions the second chance they were never really going to get from their villainous boss – from Fruit Bat!

As her last stop, Batgirl visits Kai, to let him know he’s free, but not to come back to China. He asks her to apologize to Babs, and she agrees, sadly. Waiting for her flight as Batgirl, looking at the sunset, Babs ponders the events, especially her mental manipulation of herself. However, Frankie alerts her to a new mission, possibly next month’s airborne confrontation with Poison Ivy!

In Depth: And so we conclude “Beyond Burnside!” The advertisement for this book when Rebirth was announced was that Batgirl was going to Asia to level up – and this conclusion promises a very interesting way of doing that, giving Barbara a superpower of turning her memory off and boosting her prediction, reaction, and strategic skills to enormous levels. Hope Larson has steered the good ship Batgirl steadily between her own independent comic style, traditional superhero comics, and the legacy of the last creative team to leave their mark on Batgirl. Though the setting divorces it a bit from the usual Bat-Family milieu, and doesn’t even contain strong character or historical linkages like the similarly globally focused Nightwing title, Batgirl’s sense of connection to her father, to Batman as a model, and to a light, fun, but not too frothy tone made this arc a pleasure to read from start to finish.

Artist Rafael Albuquerque has been a huge part of that tone – drawing a strong, intelligent, beautiful Barbara Gordon and Batgirl, with some really muscular action sequences. The climactic fight this issue was the pinnacle of his skills – the speed, difficulty, and fun of the fight are expertly conveyed in Albuquerque’s sketchy, assured lines, and Dave McCaig’s colors provide the perfect atmospheric complement. The final scene, with the gorgeous yellows of the sunset, really highlights a fond farewell to this team – though they will continue for the epilogue issue next month as Babs returns to Burnside and tangles with Poison Ivy, before the handoff to the clean lines of Christian Wildgoose.

Larson has done a really strong job keeping Barbara a relatable figure – knowing her own skills, but not arrogant or cold. Her struggles with Kai, while perhaps a bit cliched, were well judged, though after the constant flirtation and dead-end relationships of the last five years of Batgirl history, it seems a bit odd that Larson is choosing to focus so much of her plot and emotional energy in this book to a major romantic interest in her first and second arcs. But as long as it’s handled as sensitively and intelligently as it has been here, the book will be well worth following.

Pick up/Pass? If you’ve been enjoying Hope Larson and Rafael Albuquerque’s continuation of Batgirl’s adventures so far, this is definitely a solid pick up.

In Conclusion: The first arc of the new Batgirl closes cleanly, setting Barbara up as an independent, admirable heroine in a world of potential.