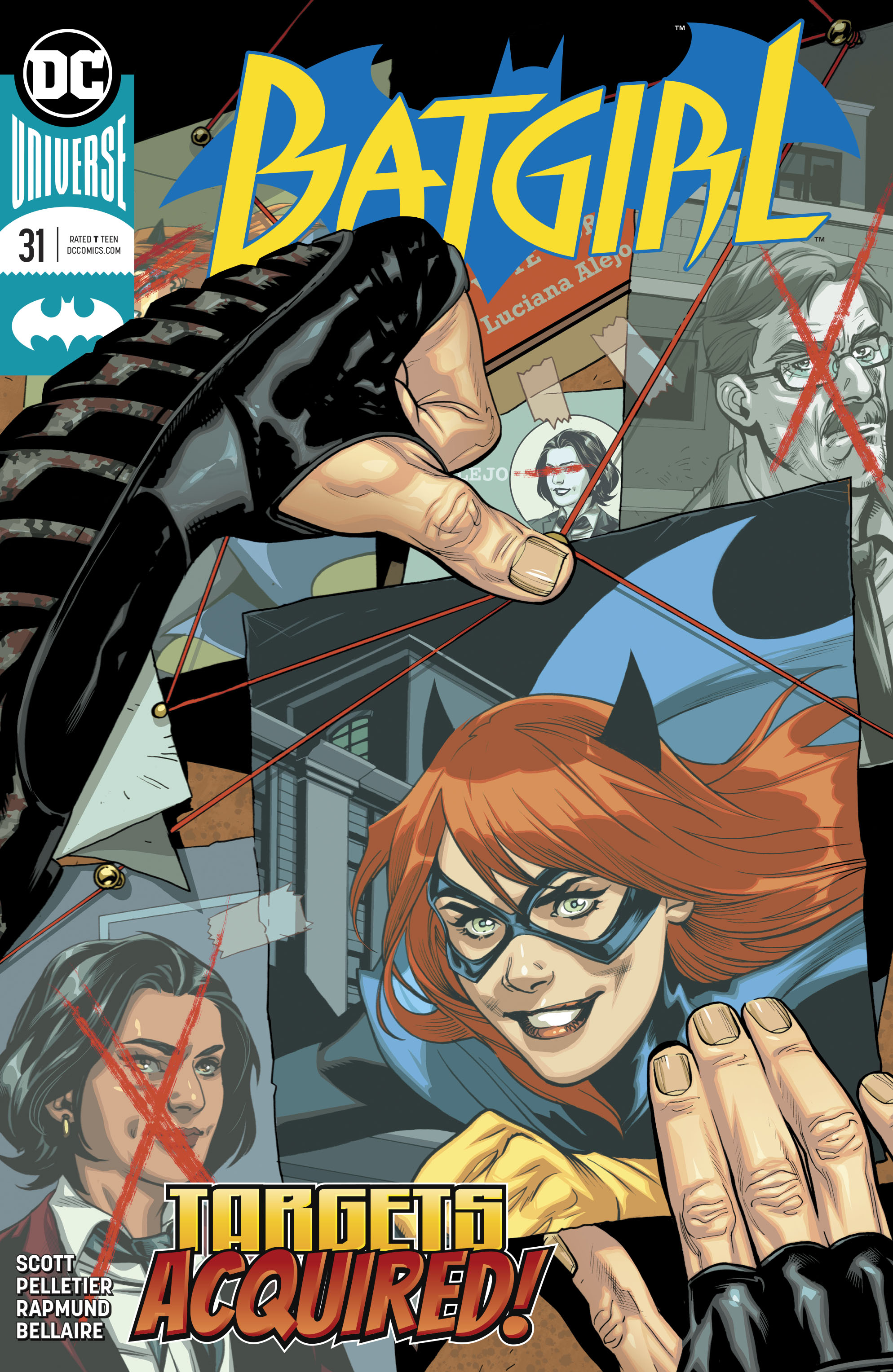 Synopsis (spoilers ahead): Babs is volunteering at Alejo’s mayoral campaign headquarters. Jason Bard heads up Alejo’s security detail. They have trust issues mainly because Bard tried to frame Jim Gordon to get his job. Also, Babs suspects Jason is up to no good, particularly since she caught him trying to incite violence at an Alejo campaign event in the service of the incumbent, Branson Moore. He says he was just keeping an eye on things. Whatevs.

Batgirl wipes the floor with a phlegm guy who stole a woman’s purse. The next day she is at the Alejo campaign headquarters and expresses her mistrust of Jason Bard. The two talk about the threat of the assassin Cormorant and how they will protect Alejo from him. Jason gets the volunteer coordinator Izzy to put Babs on the fundraiser guest list for that evening. She reluctantly does so even though Babs hasn’t put in the requisite time for such an invite.

At the fundraiser, Izzy notices that Barbara isn’t at the party. Little does she know that Batgirl is watching the scene from an adjacent rooftop. She spies Cormorant aiming a gun at the fest and interrupts his shot so that the bullet misses its target.

She fights Cormorant who is a tough customer. He comes out on top and escapes but she is able to get a sample of his blood. Back at the Clock Tower she analyzes the sample and discovers that Cormorant is Edward Wells, ex-military and merc.

At his squalid apartment, Wells gets a call expressing disappointment at his failure to kill at the Alejo fundraiser. He was apparently under orders not to kill a Bat.

Babs figures that Alejo’s rival, Mayor Moore, is behind the attack on Alejo so she heads over to his headquarters. There she finds Moore being attacked by Cormorant. They fight. The assassin leaves. She confronts Moore about being behind the violence at the recent Alejo rally. He whines about it.

Apparently, all this trouble started when Moore signed a deal to close Blackgate Prison, which Alejo agreed with. What is the connection between Blackgate and Cormorant? Back at Alejo headquarters, Babs asks Alejo about the Blackgate deal and she says that closing the prison will be a major part of her campaign starting with a TV interview she is scheduled to give the next day. At the news building, Cormorant gets in an elevator with Jason Bard disguised as a building worker. Uh oh.

Analysis: Writer Mairghread Scott continues to build Barbara Gordon’s world. The character of Cormorant is still a pretty stock ‘assassin’ character and doesn’t have much complexity yet.

There does seem to be a lot of progression of the main story, this issue is very focused on the central mystery, snot creatures notwithstanding. So far it is a very solid action/mystery story.

I do have a number of unanswered questions: Why does Barbara fight the phlegm guy at the beginning of this issue? It doesn’t seem to have anything to do with the story. Whatever happened to the soaring stock price of Barbara’s company? Is that important? Also, Jim Gordon is conspicuously missing after the pair fought over Babs’ support of Alejo. Also, there is no mention of Barbara’s back trouble in this issue.

It isn’t clear if any of these are pertinent to the current story arc, will be revisited in future issues, or will be discarded entirely. That being said, I care enough about this book to wonder about those things, so that is saying something.

The inks are by Norm Rapmund, pencils by Paul Pelletier, colors by Jordie Bellaire, and letters by Deron Bennett. The character of Izzy is shown with some wonderfully sour facial expressions and with her fuschia hair, is very recognizable. The art depicting Batgirl on the rooftops staking out Alejo’s fundraiser are dramatic. Babs’ bright red hair flies in the wind and in her face.

Final Thoughts: Batgirl continues the story arc which shows her dealing with Gotham City politics. This second issue raises more questions than it answers as the mystery of who is behind Cormorant develops.