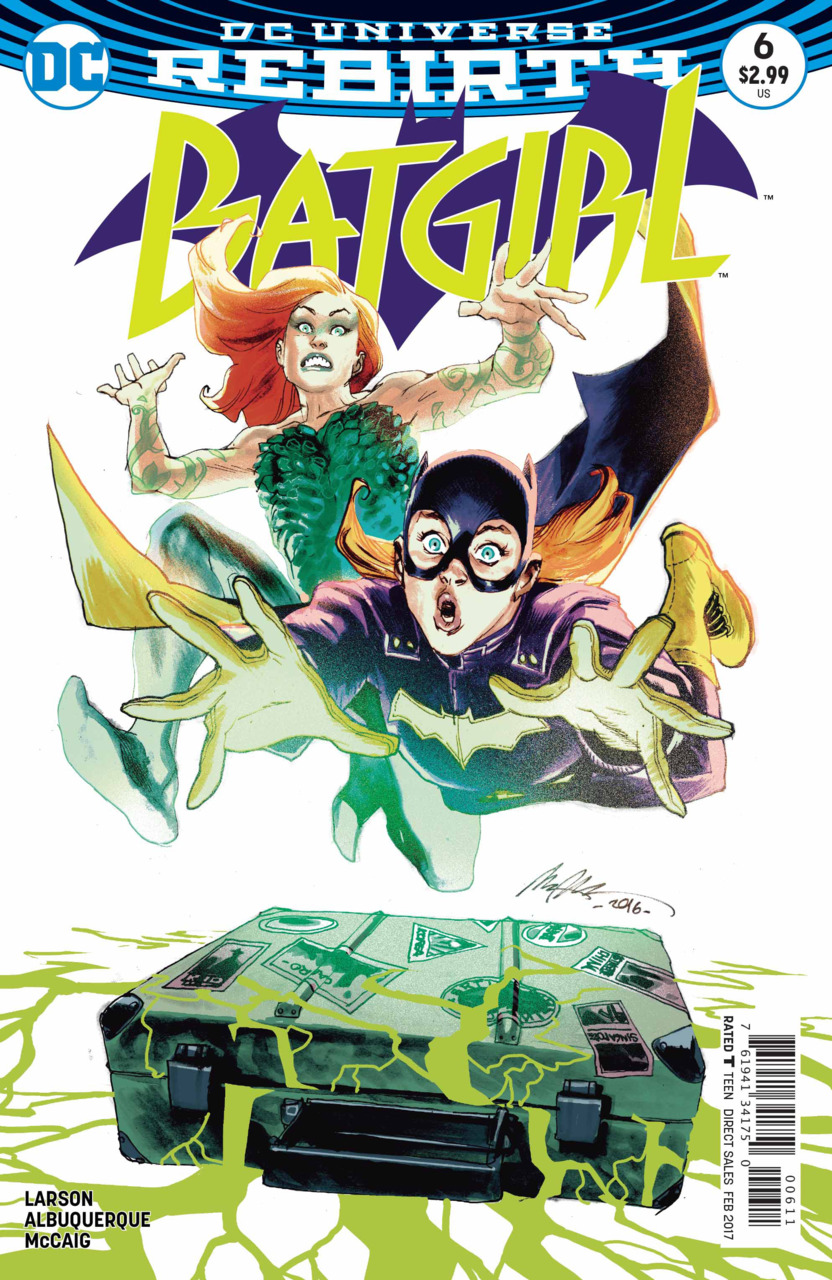 Summary (Spoilers): In another flash-forward opening, Batgirl hangs for dear life to the outside of a plane being attacked by a huge plant. Back at the beginning of our story, Babs submits an application on the plane as severe turbulence hits. An evil smell adds to the disturbance of the passengers, and Babs changes into her “work clothes” to investigate. Following her nose to the cargo hold, she finds a bizarre plant is the source. Poison Ivy appears, and explains the plant happens to be a fossil that the altitude and turbulence has woken up. The two argue what to do, and the plant attacks Babs. When Batgirl defends herself, the plant screams, and breaks the exterior door. As Batgirl struggles to stay in the cabin, Ivy uses her scents to mind control the entire flight into happy slumber. Ivy selfishly forces Batgirl to go out on the wing, and we have arrived at our opening scene. Failing to stop the plant, Batgirl and Ivy use the plane’s oxygen masks to clear their minds from the altitude. Babs is struck with the idea to turn the chemical process in the plane’s emergency air systems to make weed killer, infuriating Ivy. However, Babs manages to persuade Ivy that her plan is necessary, to destroy the extinct plant and avoid Jurassic Park hubris. The plan works, but even with Ivy’s reluctant help, Babs is knocked unconscious. She wakes up as the plane lands, sitting next to Ivy, and the two trade winks as they look at the damaged plane. Frankie and an accepted job application await Babs, and nearby, the mysterious white-haired son of Cobblepot heads to Burnside!

In Depth: As a segue between “Beyond Burnside” and “Son of Penguin,” this story does its job. All the appropriate beats are hit, a story is started and resolved, and the bits and pieces from last arc and next arc move around in an enjoyable way. Rafael Albuquerque finishes out his final issue for this title (at least for this time) with flair, though the sketchiness that’s given the book a slightly unpolished finish continues. Larson’s handle on Babs’s character is decent, though this story is nearly completely inconsequential – even flirting with the “it was all a dream” ending, to show how low the stakes were.

On the whole, the issue felt unnecessary – nothing in the Beyond Burnside arc was resolved or challenged, and Penguin’s son arriving was one page that could just as easily have been the first page of the next issue. Perhaps DC had contracted Albuquerque for six issues, but Larson didn’t have a six-issue story planned, so they created a one shot to prevent artist switching on the next arc? Whatever the reason, hopefully the next arc will provide higher stakes than this epilogue promises.

Pick up/Pass? Since it’s nearly completely self contained, this issue is not necessary for the ongoing story, and isn’t strong enough to recommend picking up for its own merit. Definitely wait for trade.

In Conclusion: Batgirl returns from Beyond Burnside in a fluffy one shot adventure with Poison Ivy.