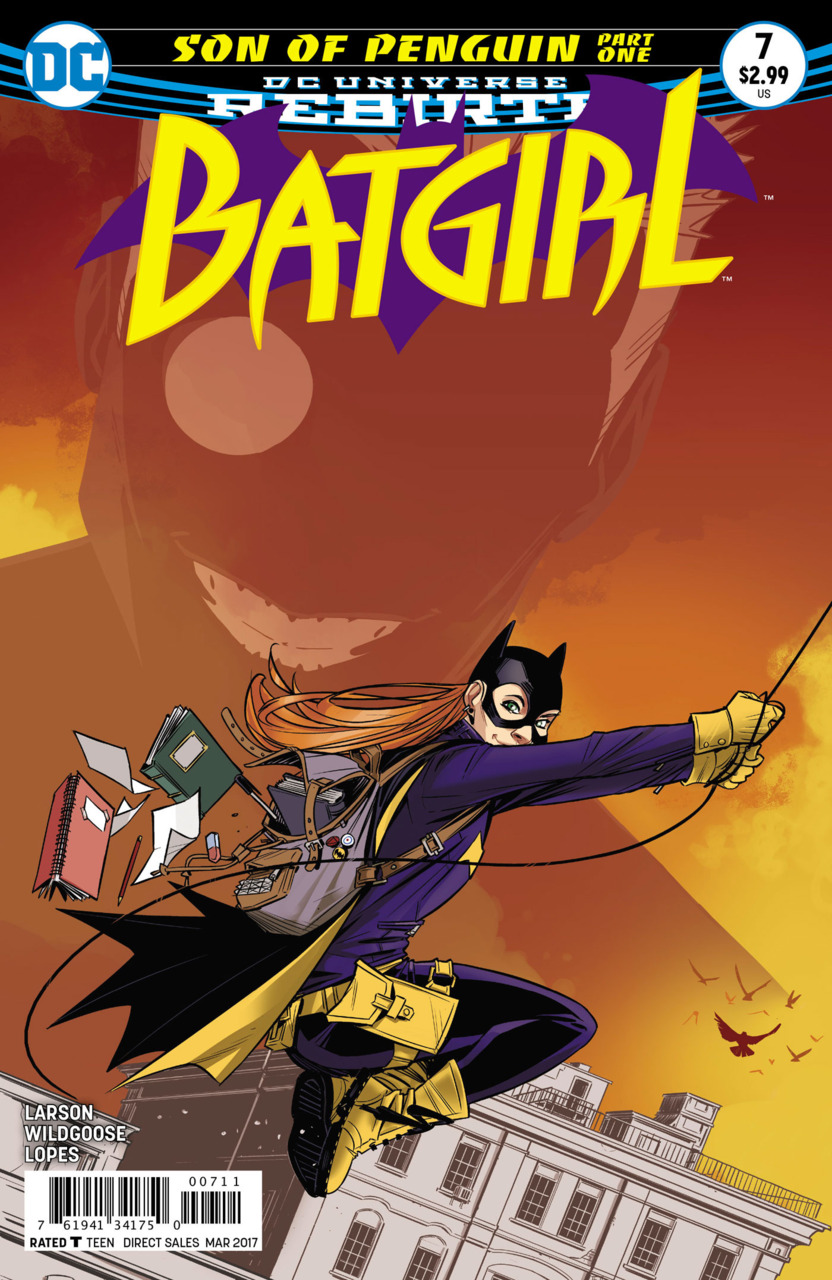 In Brief: Babs makes a triumphant return to her home turf, finding a new purpose and investigation waiting for her.

Summary (Spoilers): Batgirl, having returned to Burnside, resumes her nightly patrolling for justice, stopping some vandals in the pet shop which replaced her favorite coffee shop. She swings off, thinking dark thoughts about gentrification. The next morning, Frankie takes her out to coffee to tell her she’s moving out. Babs embraces her, happy that her friend is moving in with her new girlfriend, and heads to class in her new library science program. Babs’ passion for education and information access impresses her professor when she volunteers to teach kids code at the local library.

That evening, Babs meets Alysia and Jo at a Gordon Clean Energy event, overhearing some of her tech industry peers congratulating themselves on their social activism, then complaining about the homeless problem in Burnside. Babs delivers a fiery speech about doing good for the world while ignoring your own neighborhood, catching the eye of Ethan Cobblepot, who invites her to dinner.

Suspicious, Babs calls Dick for some background check, and to catch up as he fights a robot. As she hangs up, she notices wealthy residents reporting homeless people on a new app, and stakes out the place as Batgirl. A few hours later, she sees a truck labelled “Safe Streets” knocks the homeless man out and bundle him away. At the delivery site, Batgirl bursts out of the truck, knocking out the “delivery” men, and confronting the supervillain Fright, who claims she did not create the app, but was just taking advantage of it to recruit.

Babs’ internet-fu leads her to the revelation that Vicform, Ethan’s company, created Safe Streets, just as she arrives at her date with the Son of Penguin.

In Depth: After an arc that seemed to serve as an easing-in transition for a writer brand new to superhero comics, Hope Larson dives right into continuity with the Son of Penguin arc. Not only does she take a James Tynion IV-style approach to restoring some of Babs’ past with the new library science program, she also has Babs connect with Dick Grayson in a friendly way, highlighting their shared history and friendship. A welcome return to a familiar status quo, after the intensely separated Asia arc, and the fairly disconnected Burnside run before it. The only downside to the really excellent way Larson sets up her setting and cast is that Babs’ supporting cast continues to feel incredibly flat – though Frankie, Alysia, and Jo are very pleasant, they never come alive as they could. Perhaps it’s because even though Frankie’s served as Operator for Babs, there’s not enough connection to the heart of Babs’ life as Batgirl.

In keeping with Larson’s approach to Babs in the previous arc, Babs is a mature and passionate character, happy for Frankie moving in with her new squeeze instead of whining about it, as she did when Alysia got married. Though the political subtext about gentrification is occasionally a bit strident, there’s a chilling sense of “this would happen so easily” in the Safe Streets app – people removing inconveniences from their lives without thinking about how it affects real people in front of them.

In contrast to expectations that Larson would build up Ethan Cobblepot as a new fling of the arc for Babs, it looks like the shady son of our favorite villainous waterfowl presents a mystery to solve, rather than a heart to break for the dashing daredoll.

After a star turn by Rafael Albuquerque, Christian Wildgoose steps up to the artistic plate in a huge way. The art is gorgeous – a really nice balance between Albuquerque’s kinetic sketchiness and Tarr’s pastel cuteness. Very similar to Eleonora Carlini’s work as a fill-in artist at the end of the Burnside run. Mat Lopes complements Wildgoose’s appealing linework with some really excellent color work – it’s definitely modern, but doesn’t have the over-rendered and hyper polished look of much modern color. Lots of very nice flat color stretches, without lots of blending and mixing of shades. Gives the book a very cool, almost retro feel.

Pick up/Pass? A great jumping on point for new readers, and fitting continuation of Larson’s work and the Burnside series – definitely a Pick Up.

In Conclusion: Larson starts off her new arc of Batgirl with a bang, weaving a complicated web of intrigue and action with brilliant new artist Wildgoose.