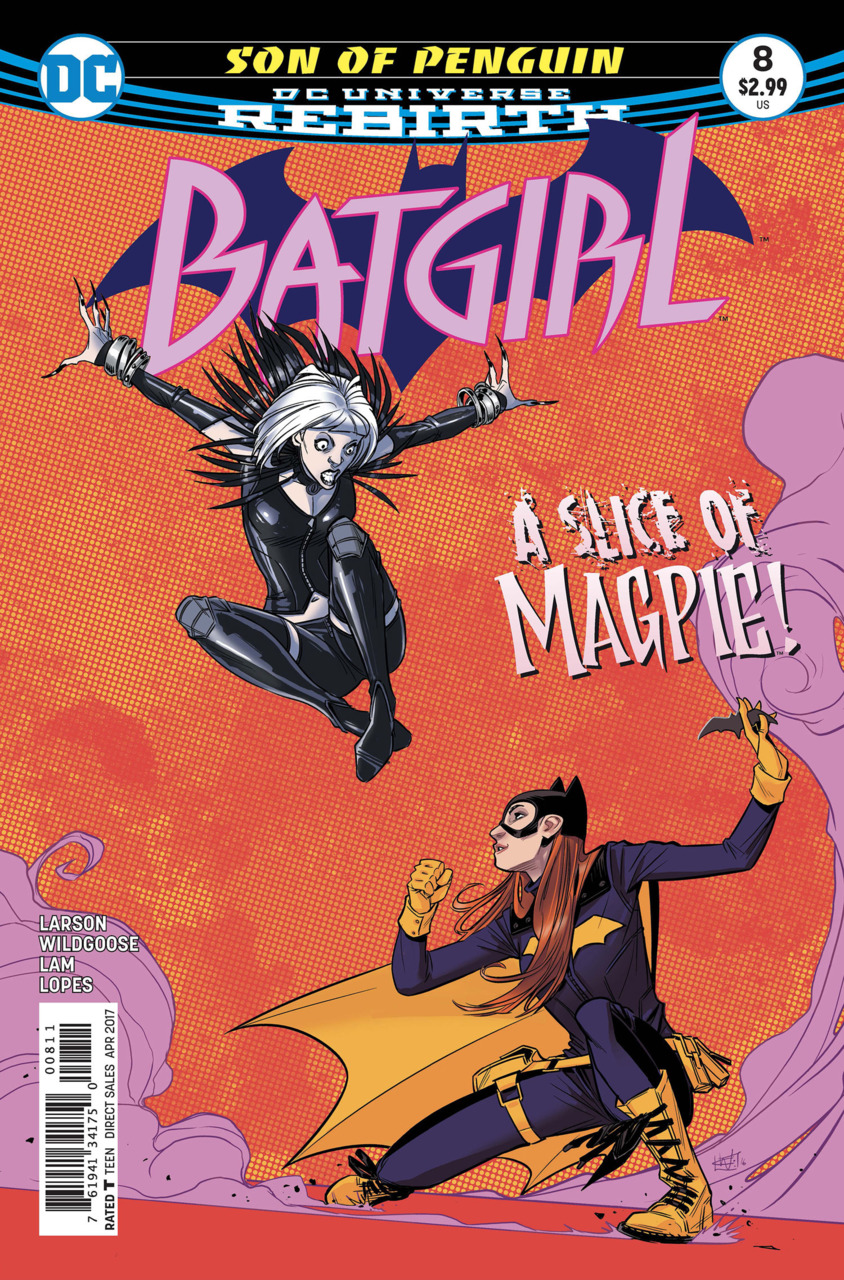 In Brief: Batgirl’s heroic and personal problems collide as she investigates Ethan Cobblepot and his company Vicform.

Summary (Spoilers): In a city bus, Babs and Ethan Cobblepot confront a hologram of Two-Face. Together, they figure out how to defuse the villain’s bomb, with a clever reference to Harvey’s obsession with the number two. The scene pulls back, and reveals that Babs and Ethan have just completed their first date in an escape room. With a bit of flirting, Babs fishes for information about Ethan’s father, the Penguin. Being the son of one of Penguin’s waitresses, he was financially supported by his father, but when he finally met the man, Ethan disgusted his father. Back to the present, Ethan says he used Penguin’s payoffs to start his company Vicform. Babs gives him a romantic kiss, he forgoes an attempt at a one-night stand in favor of a second date, and Babs agrees.

Next morning, Babs heads off to her volunteering work teaching coding at a local elementary school. Though distracted by her crush on Ethan, Babs finds connection with a girl named Esme, a coding prodigy. After the workshop, Esme meets Lauryn, her “Walkhome”, and Babs heads off for an evening surveilling Ethan’s Vicform company as Batgirl.

She cuts off her stalking to meet Frankie and her girlfriend, Alysia and Jo at a bar/laundromat. The mood is low, and Babs ditches the group to stop a drunk from harassing a girl doing laundry. The girl also mentions getting a “Walkhome,” leading to more Batgirl shenanigans. Realizing that Vicform is behind this new app as well as last month’s “Safe Streets”, she tails the girl, discovering that the Walkhome employee is really supervillain Magpie. After Batgirl’s interference causes Magpie’s star rating on the app to drop, the two duke it out, until Babs gives Magpie her own version of five stars.

The next day, Ethan gives a statement addressing the concerns Magpie’s actions highlight. Privately, he plots to get Batgirl out of his way.

In Depth: Hope Larson continues her reconstruction of Babs’s status quo in Burnside after her trip to Asia. Structurally, the issue hangs together a lot more than the first arc’s individual issues – possibly a function of Christian Wildgoose’s tighter pencils and panel layouts, as opposed to Rafael Albuquerque’s high energy sketchy style. A few things remain the same – Babs’s constant quick-changes from her cowl to her street clothes particularly. Larson’s more grounded approach highlights both the strengths and weaknesses of the Burnside run to which she is the heir. While removing the flightiness and confectionery aspect also removes much of Babs’s immaturity, it makes those elements that much more obvious when they do burst through, as in the clumsy scene where Babs meets her friends at the laundromat/bar.

Alysia Yeoh as a character has existed for six years, and the writers still haven’t figured out how to use her in a way that doesn’t foreground what she is, rather than who. Since she continues to show no sign of joining Batgirl’s world of heroes, one can only hope that Larson finds a stronger plot line that ties into the action, rather than providing underbaked portions of Babs’s life outside that world. Chuck Dixon faced a similar circumstance with his characters Ariana Dzerchenko and Ives when he wrote Tim Drake as Robin. Gail Simone was also in similar situation when she developed several characters like Josh and the restaurant family who lived next to the Clocktower in Birds of Prey. Dixon and Simone handled the issue of non-caped friends and loved ones by either reading them into the story, or keeping their appearances to a minimum. Hopefully Larson finds a better balance with Babs’s social life soon.

The pages of Babs volunteering to teach coding to local elementary school students provide a nice follow up to her fight against Teacher, the actual interactions feel more like Larson googled “how to talk like a coder” than revealing character. Much more successful is the sociopolitical commentary and exploration of exploitation in Ethan Cobblepot and Vicform. Though Ethan denies it, the possibility of Penguin being behind it all looms large as his villainous designs towards Batgirl surface. Additionally, do Ethan’s monologues to himself hint at mental issues, or just clumsily exposit his schemes for the audience?

Pick up/Pass? Larson and Wildgoose turn out a solid, appealing issue, worth picking up, though not pre-ordering.

In Conclusion: Though Batgirl’s work/life balance could use some work, “Son of Penguin” continues building a decent foundation for its story.