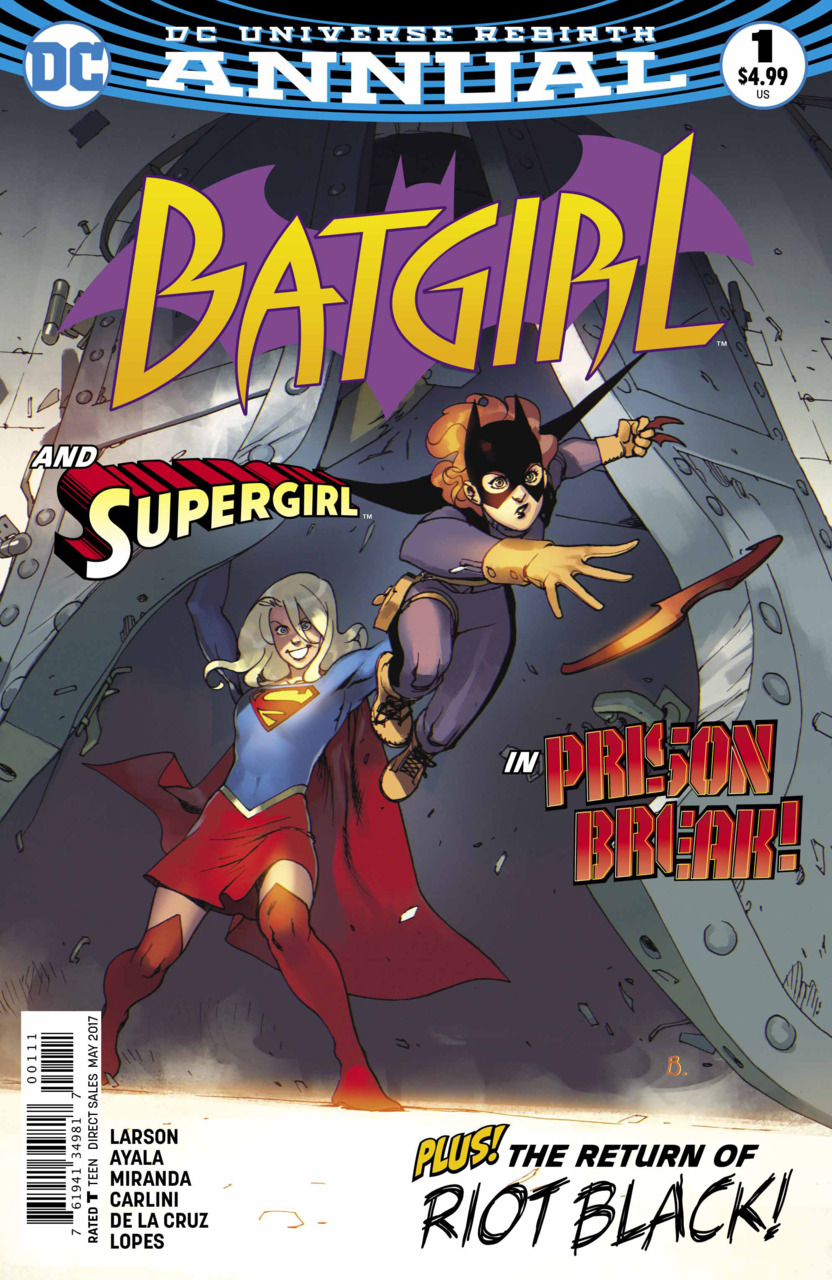 In Brief: In two tales of adventure, Batgirl teams up with new friend Supergirl as well as longtime BFF Alysia.

Summary (Spoilers): “World’s Finest”: During a rainstorm, on a skyscraper in National City, an upside down Batgirl informs the Red Spur that his plan has failed. The hero and villain are surprised by Supergirl. Red Spur parachutes away, but Batgirl has planted a tracker on him, saying she’ll get him tomorrow. Supergirl asks if Batgirl could back her up breaking into Cadmus’s Wayne Tech security. Kara says that she’s heard an imprisoned girl psychically, and that Babs will help her attracting attention to her illegal alien status by being stealthy.

At the black site, Babs and Kara work together, taking advantage of Babs’s technical knowledge and Kara’s powers to make their way through the security. Babs’s backdoor fails, setting off the alarms, so she crashes the whole system. The World’s Finest pair enter the prison area, meeting a boy with snow powers. They defuse the situation with Babs’s chemical knowledge, then find the girl Kara heard in her mind. The girl says she’s speaking Kryptonian because she has the Key to the Phantom Zone in her head, and steals a bunch of Kara’s power to get there. In the desert, the girls debrief, Supergirl feeling bad about their attempt to rescue the girl, but Batgirl reassuring her. The story ends with the two trading insults about Kara’s password.

“Rain Check”: Before Babs’s trip to Asia, she found herself having difficulty making time to spend with Alysia. Even with Frankie’s help, Batgirl has too much to handle, as we see a montage of missions where Babs has to keep asking Alysia for a rain check. Finally, Babs and Alysia head out for a Friendship Anniversary celebration, but Babs is interrupted by Frankie with updates about their current mission to stop Riot Black, saying she has to go out tonight. Alysia insists on going with Babs, since their friendship anniversary only comes once a year. At the office building where Riot has entered, Babs has to play along as a civilian so Alysia won’t find out she’s Batgirl. Riot strikes, and Babs and Alysia together take him down using one of Batgirl’s broken drones. The two end the night on top of the police station, lighting the Batsignal and reaffirming their friendship.

In Depth: The last Batgirl Annual, #3, consisted of four team ups – the Grayson Spyral team, Spoiler (Stephanie Brown), Batwoman, and the Gotham Academy kids. It also setup the final two-issue arc that closed out the New 52 Batgirl run in time for Rebirth. This issue accomplishes some similar goals – it teams Babs up with Supergirl and her friend Alysia, and sets up the next arc of Supergirl, written by Steve Orlando. While the first story has some nice moments of characterization for Babs and Kara, showing Larson’s typically strong sense of character voices, there’s a bit of frustration involved knowing that it’s for a different title – buying a Batgirl Annual only to get the prologue for a Supergirl story. Inaki Miranda’s art is polished, though not as stunning as during the final six issues of the New 52 Catwoman (though also not as dreadful when on Birds of Prey back in 2011).

The second story, by Vita Ayala, one of DC’s new talents who has contributed stories to the DC Holiday Special and their New Talent showcase, has incredibly appealing art by Eleonora Carlini. Carlini, who provided several issues of pencils for the New 52 Burnside run, and was probably the strongest visual voice after Babs Tarr during that creative run, has a very similar sense of line and fun exaggerated actions that blend well with Christian Wildgoose’s work on the main Batgirl issues currently. The panel where Alysia stomps on the defeated Riot is especially charming, Carlini’s sense of figure and expression really playing out well for Babs and Alysia. Unfortunately, Ayala’s writing is painfully generic. Alysia has no more personality than she’s had for six years, and Batgirl doesn’t have the well-defined character Hope Larson’s been developing over her nine months on the title.

Pick up/Pass? If you’re following Supergirl, or really love Alysia, this issue is for you. The art, especially for Rain Check, is very strong, but all in all, we’d say wait for the trade.

In Conclusion: Setting up the next Supergirl story arc and shoring up Babs’s personal life, this Batgirl Annual isn’t quite as interesting as the last one, but still fun.