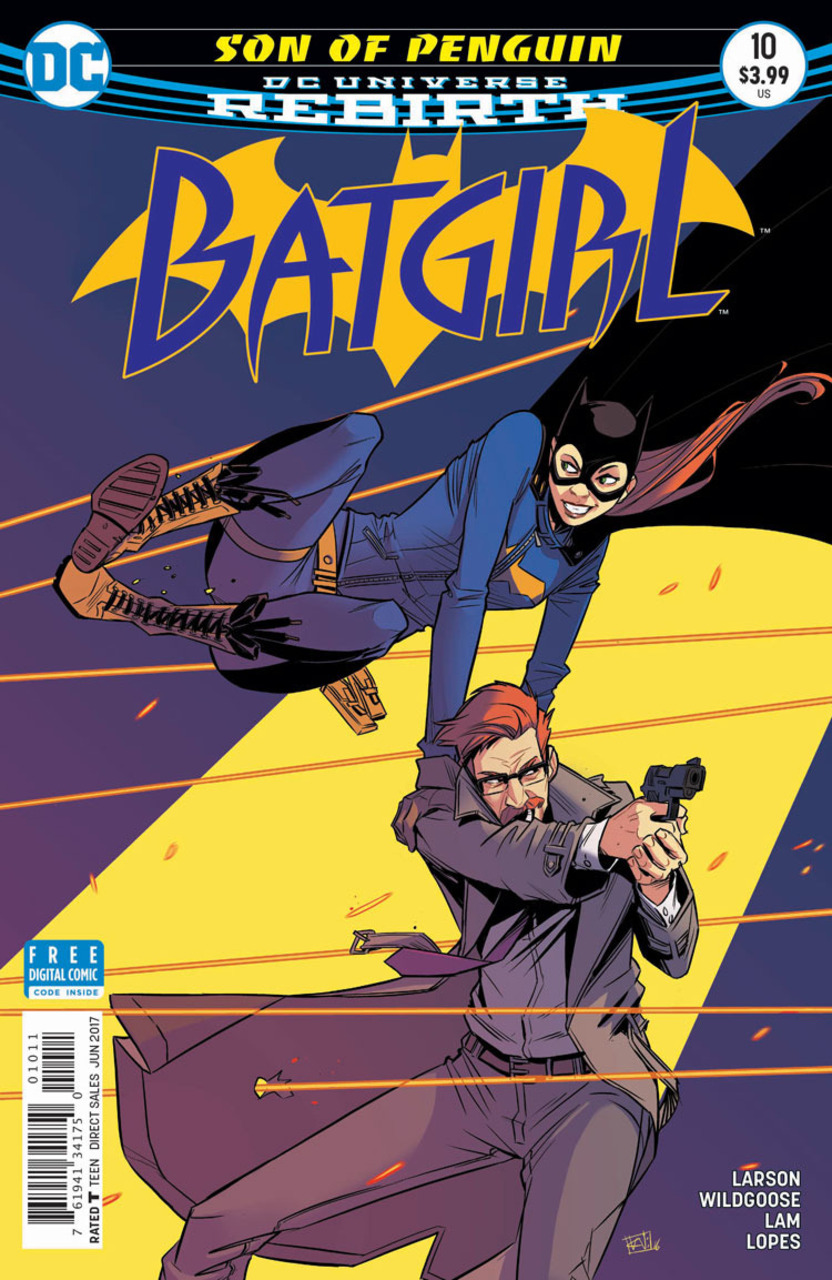 In Brief: Ethan’s plots come to a head while Babs steadfastly pursues the clues to take him down.

Summary (Spoilers): Batgirl and Penguin face off over the table of tennis. Cobblepot claims that Ethan is here to destroy him, since his son can’t win his approval. He takes her to the Iceberg Lounge, where Commissioner Gordon and Batgirl notice a disturbing pattern. Ethan’s Vicform applications appear to allow him to collect enough data to influence people’s actions on a mass scale, like causing disturbances at the Pengin’s casino. Batgirl gets a text from Ethan himself, and rushes to meet him. She plans to break up with him because of his nefarious activities, but finds herself getting dumped by an intern instead.

On her way home, Babs sees a mugging. Switching into Batgirl to blow off some steam, she winds up home, feeling destitute. Dick Grayson, Nightwing, texts her just as she thinks of texting him. He lets her know that her meeting with Penguin has been leaked, damaging her reputation. Fortunately, the man himself awaits outside her window astride a motorcycle.

The Dynamic Duo head out in civilian clothes, and Babs explains she believes Ethan intends to take over for the Penguin. Unfortunately, one of Ethan’s spies sees her being friendly with the mysterious helmeted man, and texts him a picture of the moment.

Early the next morning, Babs is woken by Alysia and Frankie. They all have some emotional drama going on, so she takes them to brunch. Alysia’s problems with Jo are fixed with some perspective, but just as they friends are about to hug it out, a car crashes into the diner. The driver claims it was remotely taken over, and Babs heads out to find evidence of Ethan’s plan. She’s learned to use her hyperfocus with a goal set or a time limit, and finds what she needs quickly. Suiting up, she swings away to deliver some justice to her ex. Ethan, meanwhile, has confronted his dad, revealing himself to be the high-tech villain Blacksun.

In Depth: So far, the Son of Penguin arc has been a very mixed bag. Ethan is a fairly generic boyfriend type villain – handsome, smart, but not particularly memorable outside of his nicely handled backstory last issue. However, his villainous plan involving social engineering through technology on a mass scale is very enjoyable, and the reveal at the end of his high tech costume is quite well designed and drawn by Christian Wildgoose.

Hope Larson’s writing also shines here, with a few small dim spots. She slips in some nice details and payoffs, like the cop dating the Penguin’s bartender, and the way Babs, Alysia, and Frankie’s personal drama helps each other get some perspective. However, she also tends to play fast and loose with things like costume changes. No one expects a long changing scene, even humorously as seen in the recent Deadpool 2 teaser trailer, but having Babs witness a mugging in progress while in civvies, and then tackle the mugger while the crime is still in progress, stretched credulity more than a little. Additionally, Babs’s feelings for Ethan are still a bit annoying, considering the two never really had any strong connection on panel. However, these minor elements are much outshone by the buildup to the climax next issue, and the relational scenes. Dick’s appearance is very welcome, and well written, after his disastrously out of character idiocy during the original Burnside run. It seems that Larson may be taking some cues from the Bensons writing Babs in the Birds of Prey, and indicating that Babs has strong connections with other members of the Bat-Family. Using the Penguin as a strong supporting character in this issue also highlights Batgirl’s importance in the DC universe, taking on such a high profile villain.

Pick up/Pass? This arc has dragged a bit with unnecessary and less well executed elements, but this issue is very strong on writing and art. Recommended pick up!

In Conclusion: The threads of the Son of Penguin arc weave together in a satisfying buildup to next month’s climax.