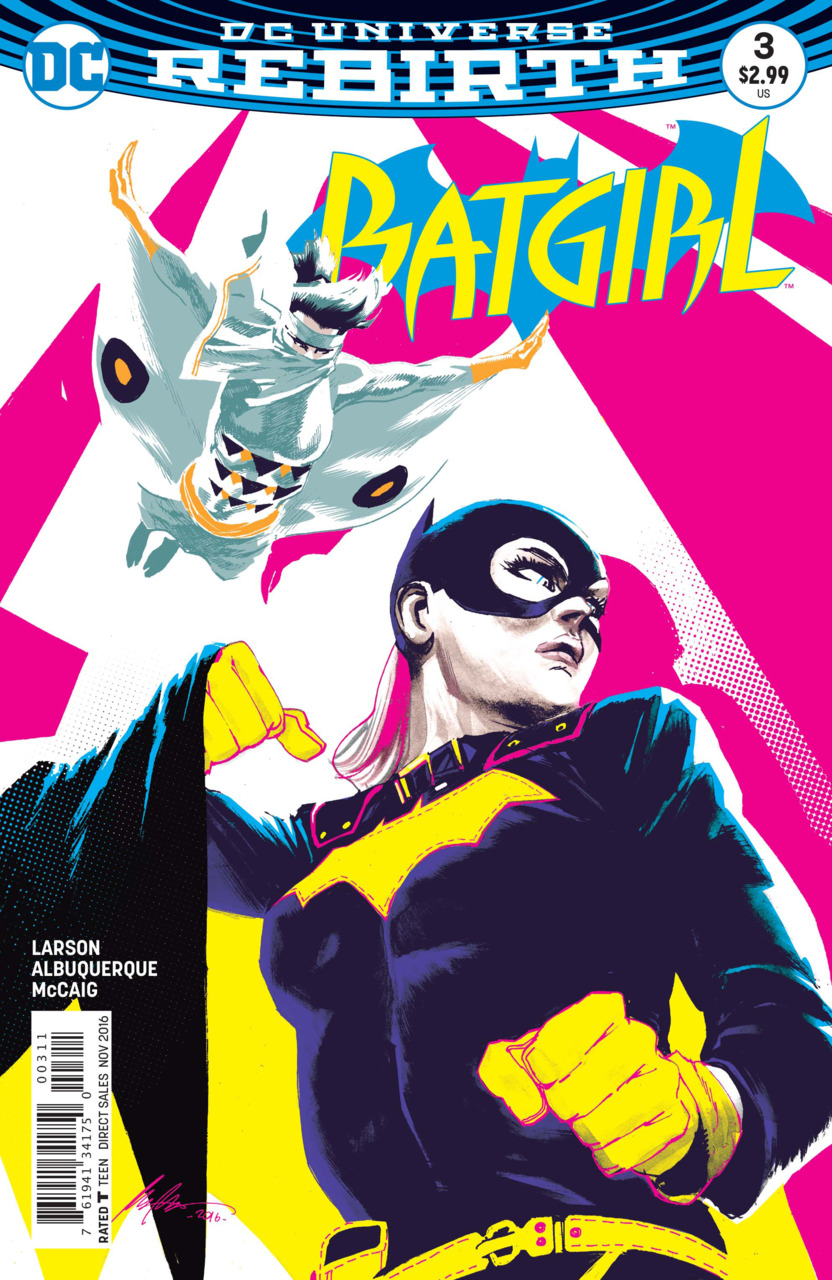 In Brief: After her defeat in the ring, Batgirl (Barbara Gordon) gets back up and pursues her mysterious foes to South Korea.

Summary (Spoilers): After Wen Lu’s devastating knockout, Babs recovers with May Hao’s help. May tells Babs (still going by “Amy Beddoes”) that Lu is deaf, and Babs draws the conclusion that part of her opponent’s focus derives from that circumstance. After doing a bit of recruiting for May’s gym, Babs replays the fight in her memory, recalling the “student” tattoo.

Sensing Kai is in danger, she rushes back as Batgirl, and finds Kai locked in the bathroom and Lu dressed in a flashy costume. Lu tries the same trick on Batgirl she did on Babs, but Batgirl is ready this time, and punches Lu through the window. Babs discovers a spy cam, and notices that it’s transmitting. After releasing Kai from the bathroom, she demands he tell her what he’s hiding. He plays dumb, and Babs leaves him to go to China, while she heads to South Korea to pursue Lu’s civilian identity.

On the plane, she meets a bacteria salesman, which jogs her memory about Kai’s illness in the past two issues. She suspects Kai’s carrying bioencrypted bacteria. After settling in, Babs heads out in costume, checking in on Wen Lu stealthily. She then tracks the spy camera’s transmitter to its source – a building under construction – and finds a trap – a man dressed as a construction worker, and Wen Lu back in her flashy costume. The man tells her Kai is being tracked by their mysterious “Teacher,” and the two villains close in on Batgirl.

In Depth: Another issue, another country! Moving from plot to plot with the same rapidity with which she jumps locations, Larson continues to build up steam for this arc. While the plot itself is quite enjoyable, it’s a bit confusing how Batgirl is exactly going to level up, as the solicitations seemed to indicate. As our intrepid Batgirl podcast host here at TBU, Stella, has mentioned, this still seems very much like a direct continuation of the Fletcher/Stewart/Tarr run. However, Larson adds some significant maturity and agency to Babs – whereas Babs was consistently flatfooted and complaining for the past few years, now she’s taking control, tracking things down, and refusing to put up with idiocy from Kai. Even though DC and Larson are still definitely shooting for a different demographic with this Batgirl title than the main Bat-Family audience – people who love Babs, the new costume, but aren’t fussed by trying to fit her into Gotham’s always tangled continuity, and just want a good clean action story with a great heroic central figure.

Albuquerque is still drawing a Babs with a powerful figure – the scenes in the ring really highlight her strength. His facial work still tends towards the sketchier for my taste, but the news that he’s just here for the first arc, and Christian Wildgoose will be taking over for the next arc is bittersweet. Albuquerque’s a legend, and it’s awesome that he spent time building up this new run, giving it a distinctive look, and giving so much passion for the character and world in interviews. He’ll definitely be missed, but Wildgoose’s preview work is gorgeous, so it’ll be a trade, not a loss.

Pick up/Pass? A solid issue in a solid title, and provides more Batgirl than the last issue. Equally balanced between “pick up” and “wait for the trade.”

In Conclusion: Batgirl swings back into action, both in her personal and heroic lives, and propels her title forward.