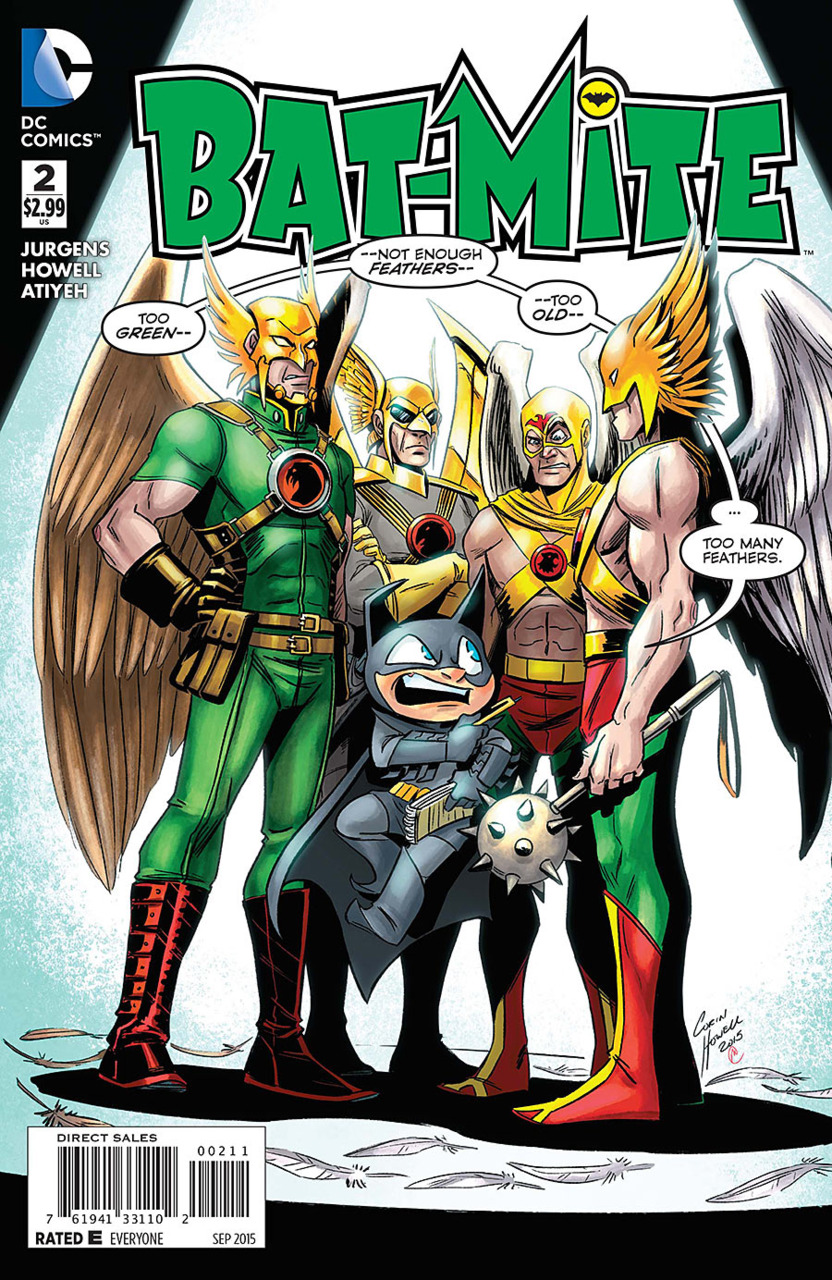 Opening up where the previous issue left off, Bat-Mite contemplates how to free Hawkman before the evil doctor can replace her brain in his body. After a few quick teleportations around the mansion, and commentating on the abundance of hair on Hawkman’s chest, Bat-Mite frees Hawkman and transforms him into a fully equipped badass whom he dubs the “Hawkman – the Savage!”

As our villain becomes extremely frustrated by Bat-Mite’s powers, her henchmen enter the room and gas (yes again) Bat-Mite. As two of the evil nurses take Bat-Mite outside and hurl him into the ocean, Hawkman is prepped for the brain transference. Flipping a giant Frankenstein-esque lever, a massive amount of electricity courses through Hawkman.

Cutting back to Bat-Mite, we find out “hero” contemplating his existence underwater…and as a shark swims closer, Bat-Mite comes to and teleports back to the surface. Announcing that the “Dark Mite Returns!” Bat-Mite is suddenly hit from behind by a gigantic mace. Realizing that Doctor Trauma now has control over Hawkman’s body, the two engage in a brief battle…with Bat-Mite dodging the attacks of Hawkman’s weapons. Pulling out a bat-shield reminiscent of the ’66 TV series, Bat-Mite quickly knocks two of the evil orderlies and grabs their knock-gas gun. As Hawkman rockets towards Bat-Mite (yes, he added rocket jets to Hawkman), Bat-Mite sprays the former hero who crashes into the wall behind him.

Bringing his body back inside, Bat-Mite convinces Nurse Agnes to reverse the process and restore Hawkman’s brain to his body. Later, Hawkman is shown releasing Trauma’s various prisoners…although he doesn’t quite recall the events of what happened, or of Bat-Mite. As Hawkman flies off to another adventure, Bat-Mite observes two of the kidnapped victims who are discussing their rescuer…a small child dressed as Batman. While wondering whether this kid is Batman’s sidekick, Bat-Mite drops down becomes extremely angry that they would assume he was the sidekick.

Eventually, Bat-Mite transports the two back home and, in return, invite him to stay the night as he has nowhere to go. The issue closes with an image of an unknown villain who seems to monitoring, not only Bat-Mite but Robin and Batman as well. Realizing he has no intel on this “new” Bat-Family member, he announces that he will suffer the wrath of Gridlock.

Well I can definitely say that this one of my new favorite series to read. Dan Jurgens does an excellent job with the writing and I really enjoy Bat-Mite’s quips and wisecracks…I can definitely hear the voice from the “Batman: The Brave and the Bold” cartoon when I read his dialogue.

Overall this was a good issue, I liked that Doctor Trauma succeeded in taking over Hawkman…although I wasn’t sure about the “battle” that occurred between the two of them, seemed a bit out of place. I also thought that “getting knocked out by gas” gag was a bit overused…it was funny in the first issue, but was a little dry when they brought it back again in this one. I mean, he seriously didn’t learn from the first time that they knocked him out???

I was also questioning what happened to Doctor Trauma at the end of the story…did they just forget about the villain and leave her behind? Seems like a loose end that could have been tied up easily with a bit of dialogue…maybe Hawkman bringing her into custody or something. I’m also curious as to our new villain Gridlock…we see him observing the Bat-Family and I wonder what he has in store. Perhaps he’ll end up kidnapping them and Bat-Mite needs to rush to save them?

Overall this was a decent story, the art is really fantastic…kind of has a cartoon style and it really fits with the feeling of the story. But overall, this was a bit weaker than the first issue…still an overall good series.