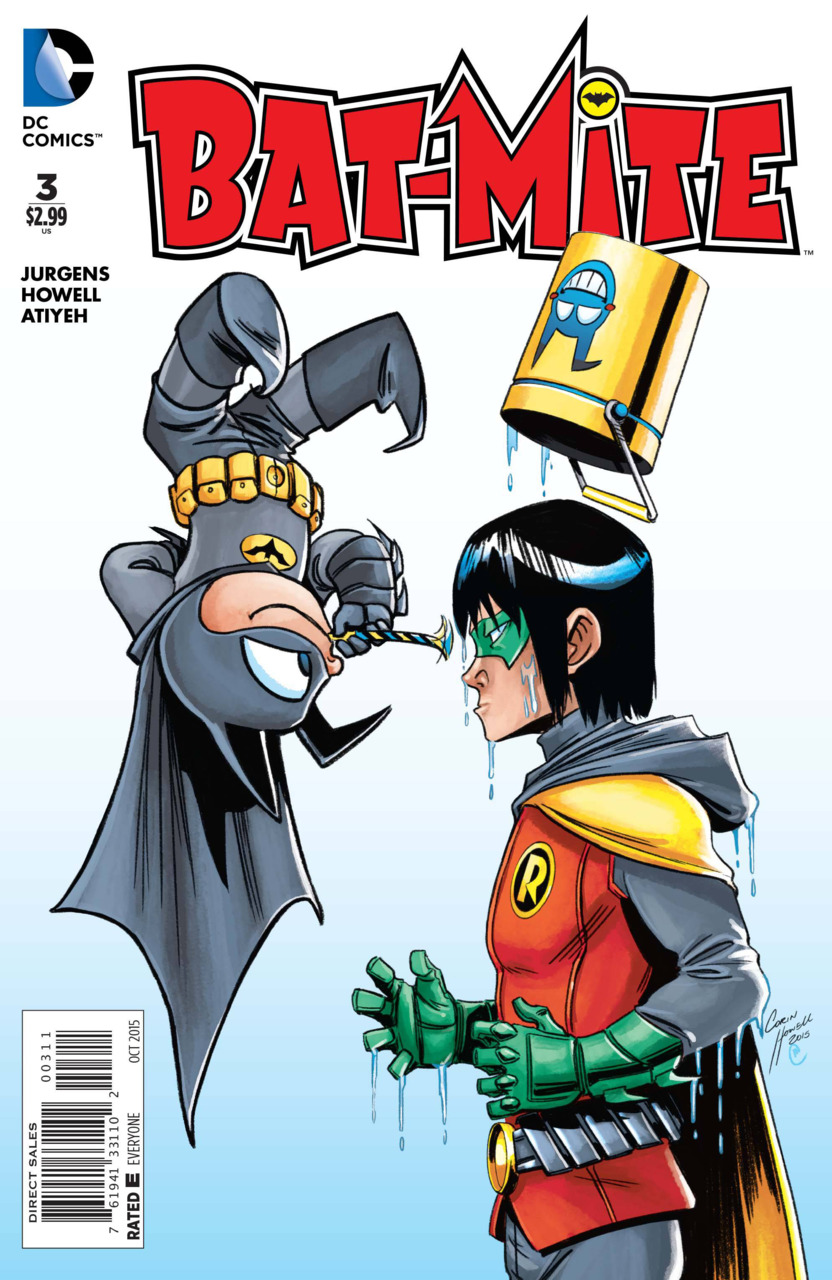 As the issue opens, Damian Wayne (aka Robin) is seen swimming to the crashed wreckage of the batmobile (seen back in Issue #1!). As Bat-Mite monologues overtop of the scene, mainly in regards to Batman sending “the runt” to take care of the crashed car, Robin reaches the surface and presses a button on a detonator. As the car implodes underwater, Robin is approached by the villain Gridlock (seen at the end of the previous issue). Engaging in a quick battle, Robin successfully attacks but is stunned into paralysis by Gridlock’s touch.

Switching scenes, it is the next morning following Bat-Mite’s rescue of the two captives. Reagan and Weed are discussing their current house guest and Reagan wonders when Bat-Mite will be leaving. Commenting that he hogs the bathroom, snores and is wasting hot water, Bat-Mite bellows that they are out of toilet paper as he strides into the kitchen – clad in a towel and sporting a 5 o’clock shadow, complete with a lit cigar and bottle of beer. Completely shocked at his appearance, Reagan begins to berate him, but Bat-Mite quickly uses his powers to don his traditional black garb. Departing for work, Reagan leaves and Bat-Mite and Weed begin talking about the imp’s abilities, as well as why Weed is named as such.

As Reagan leaves her building, she is approached by a black car and is bid to enter. Arriving inside, we discover that Reagan is secretly working for the Federal Security Bureau and her boss asks her to start a file on Bat-Mite…specifically to ensure that she keeps her eye on him. Back in the apartment, Bat-Mite sees a news broadcast about the captured Boy Wonder and immediately teleports himself to the rescue.

Arriving in a cave-like underground lair, Robin is seen strung up above a pool of water…complete with a hungry shark swimming below him. Although Damian reacts accordingly (in that he finds Bat-Mite unnecessary), Bat-Mite creates a can of Bat-Shark Repellant and attacks the ferocious creature. Freeing himself, Robin escapes and Bat-Mite attempts to assert that his presence was indeed needed. Leaping clear of the pool, Robin ends up frustrated with his rescuer and attacks him with his fists and batarangs. Attempting to get on his good side, Bat-Mite appears with roses and pizza but Robin continues the assault…both physically and verbally.

As Gridlock appears, Bat-Mite becomes extremely excited at the prospect of a new villain that could be entirely his. After some witty banter between the three parties, Gridlock begins to monologue about his plans which opens the door for Robin and Bat-Mite to attack. As Robin unleashes several batarangs, Bat-Mite conjures up a massive living batarangs of light and knocks Gridlock into the cave wall. In his excitement, Gridlock manages to use his paralytic touch to cause Bat-Mite to fall into the shark infested water. Faced with a moral dilemma, Robin leaps into the water to save Bat-Mite. Above water, he proceeds to perform CPR to resuscitate the imp. Realizing that Damian saved him, Bat-Mite comments that “you do care!” before Robin punches him in the face. Irritated that Robin has no sense of humor, Bat-Mite angrily teleports away at his failure. Walking off into the darkness, Robin laughs to himself over the situation.

The issue closes with a preview of our next hero that Bat-Mite will encounter, as we see Booster Gold talking to his robot Skeets regarding Bat-Mite’s presence.

I have to say that this miniseries is truly excellent, I constantly find myself laughing at the book and generally having a pleasant time reading it.

Overall I like that Bat-Mite is getting to interact with the heroes of the DC Universe, and enjoyed that he finally got to see a member of the Batman Family…the fact that it was Damian takes the cake. I really enjoyed the dichotomy of Bat-Mite and Robin – each of them focuses on the opposite end of a spectrum. Bat-Mite likes to joke around and have fun, as well as perform heroic deeds…while Damian is the ever stoic and serious crime fighter, who needs no help.

I liked the comedy in this issue, however was slightly put off by Bat-Mite’s appearance out of the bathroom. I was however pleased that our hero procured a can of Bat-Shark Repellant to pay homage to the ’66 TV series.

Compared to our previous issues, I think that I rather enjoyed that this story was tied up in one issue…although the Hawkman story was enjoyable, it felt a little dragged out and unnecessary. Especially since this series is only a limited six issues. I am really looking forward to seeing the crazy antics that occur with Booster Gold next month.

Lastly, I am intrigued if threat of the Federal Security Bureau will be the “big bad” that ends up accosting Bat-Mite latter on in the series…or maybe they have something to do with Gridlock, who manages to escape at the end of the issue?