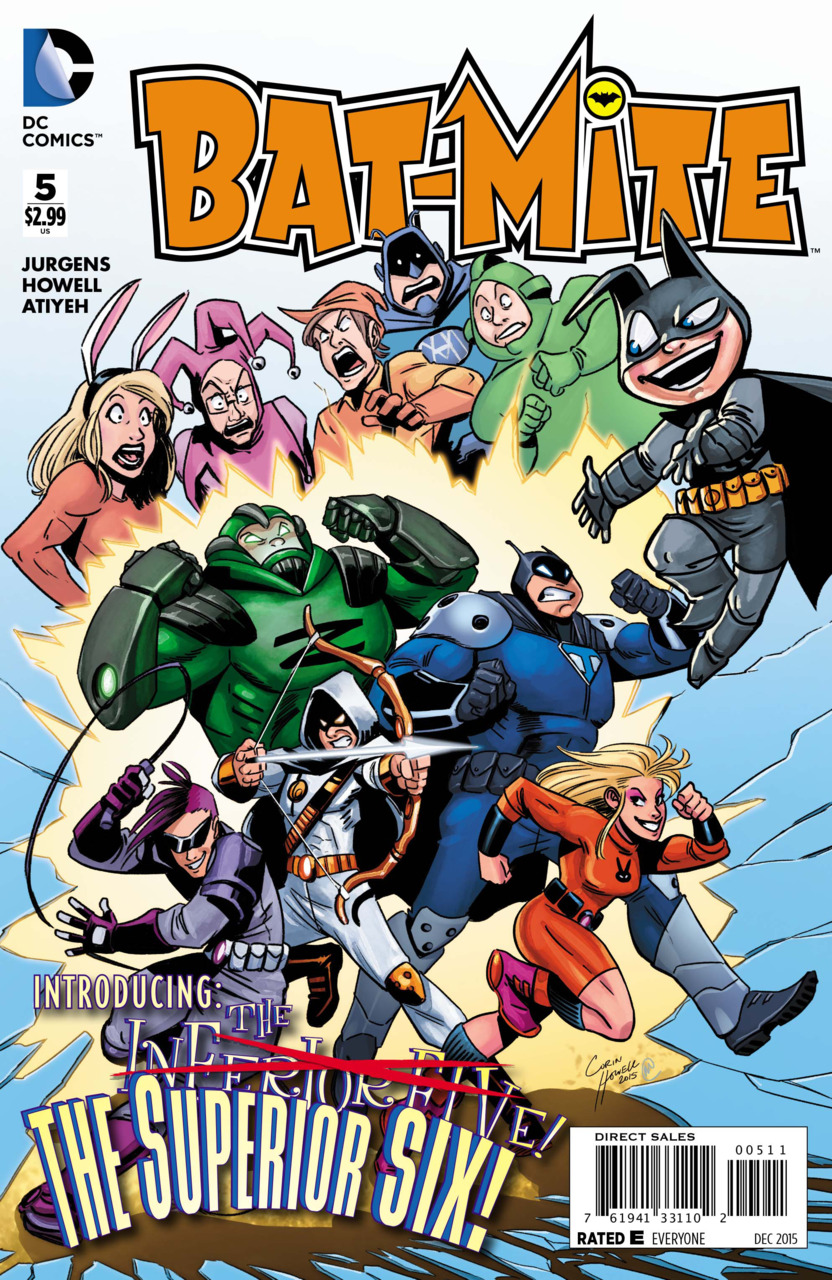 The issue starts with Bat-Mite getting coffee to refuel for the battle between the Inferior Five and the henchmen of the villain Gridlock. The Inferior Five are shown to be a hopeless group of heroes that are in need of help. Bat-Mite decides to intervene and dispense some of his brand of “support” to them. He gives them a full makeover similar to the one he gave Booster Gold in the previous issue.

With their new looks and powers, the Superior Six (now including Bat-Mite) arrive at Gridlock’s lair to return the stolen pilot episode to the museum from where it was taken. It is clear from the start of the fight that the Superior Six is just that…”superior”. They easily take down Gridlock’s henchmen while Bat-Mite confronts Gridlock. Gridlock attempts to destroy the video but Bat-Mite is able to save it. Upon examination later, it turns out Gridlock took the tape out and escaped with it.

Restored to their goofy but good natured selves, Bat-Mite vows to track down Gridlock to recover the Galaxy Trek pilot episode and put Gridlock in jail. The Inferior Five decide to help with the clean-up process following the battle.

In the final panels, we see hooded figures discussing the danger of Bat-Mite on Earth and that he is a threat that must be returned to them. They decide to send the Sentry Silent to collect Bat-Mite.

Having not been thrilled with the past issue, this week’s issue did not help in elevating that excitement. I found myself disconnected from the story not wondering if I should be enjoying it or not. This comes back to the argument that this book did not really have a specific target audience when launched. Granted, I do find certain elements of the issue entertaining but it has not grabbed by attention enough to get excited for the next issue.

The storyline, although containing some funny dialogue, is dragging at this point since they remain with the villain Gridlock. I was really hoping they could wrap up Gridlock especially with the Sentry Silent coming for Bat-Mite in the next issue. Not being familiar with Bat-Mite’s history, the introduction of the mysterious hooded figures discussing Bat-Mite’s fate leaves me intrigued to read the next issue despite the negatives I have found with the series.

The art is still great on the series and this issue is no different. Corin Howell delivers on great detail in character’s facial expressions as well as wacky, fun character designs. The action is very cartoony and colorful. Although not enough to keep me totally on board with this series, the art certainly is a highpoint and makes the issue appealing to look at if not much else.

For just being counter-programming compared to darker titles like Justice League or Batman, Bat-Mite brings a lighter tone to the collection of DC titles out right now. If only for that purpose, Bat-Mite is a good read and worth it for someone looking for that. It is not a title that connects with me but I am hopeful to see the Sentry Silent come to Earth to collect Bat-Mite.

The Hole in Things: A History of Simon...