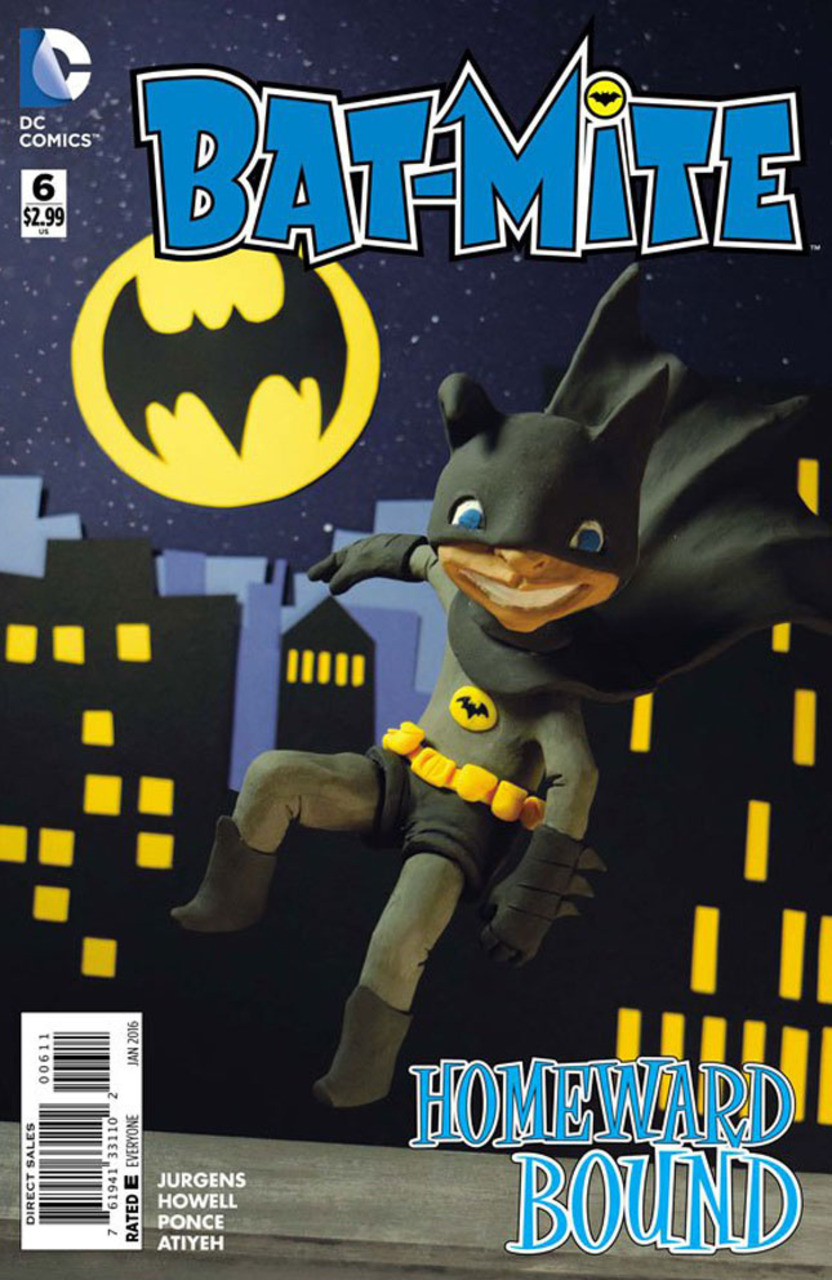 This being the last issue of the mini-series, I was not sure how they would conclude a relatively lackluster series. I was surprised that I enjoyed this last issue as much as I did. Although I have not been a fan of the series overall, this particular issue did wrap things up and delivered some pretty funny scenes and dialogue.

It goes without saying but the artwork was, again, a highlight of the issue. Howell ends the series on a high note with more than just great, cartoonish looks from Bat-Mite but also gave us some fun designs for the Justice Mites of America. Throughout the series, Howell has delivered in presenting a zany and entertaining look to all the characters involved and made it enjoyable to look at even when the story fell short.

With multiple jabs at pop culture and society throughout the series, this issue continued that trend with jokes directed at current events like the upcoming presidential election as well as changing national landmarks to honor superheroes (“appropriate” in this day and age of the superhero films and culture).

This issue actually had a sentimental moment which I was not expecting. Bat-Mite’s goodbye with Weed and Reagan seemed genuine and heartfelt. With so much colorful action and slapstick comedy, I would not have expected any kind of sincere moment between characters. Yet, here at the end, Bat-Mite tells them that they are perfect just the way they are and even seems to reconcile with Reagan after all the trouble he caused her.

As far as the overall story goes, Jurgens finally wraps up the Gridlock plotline with a “happy” ending to the character. It was a nice nod to the 60’s television era being so campy by leaving Gridlock in the pilot episode of Galaxy Trek. It was a fitting ending for the villain who craved the time of his youth.

In regards to the reveal of the hooded figures, I know I was not expecting the Justice “Mites” of America. Their arrival in the series felt like the only way to get Bat-Mite off of Earth. I will admit that I chuckled with the new threat being “Canceltron”. It was a perfect ending to this series. Overall, this was not my favorite mini-series and it certainly had issues. Anytime you try to market to “all ages”, you run the risk of missing the target altogether. Bat-Mite had some funny moments, good social commentary, and great artwork so I do appreciate DC for trying something different.

Synopsis: The issue opens in Washington DC as Reagan is being disciplined by her superior for letting Bat-Mite ruin national landmarks. We see that he has changed such landmarks as Mount Rushmore, Washington Monument, and the Statue of Liberty to showcase certain heroes from the Justice League.

Reagan’s boss gets a phone call informing him that Bat-Mite is now trying to “fix” the candidates for the upcoming presidential election (except the Donald) and is with the president in the Oval Office. Bat-Mite is in the middle of telling the president that he can help him as well when the Secret Service burst in. Bat-Mite teleports outside to speak with Weed about his meeting with the president.

As they are talking, Bat-Mite is shocked to see a billboard for a politician campaigning for “gridlock”. Bat-Mite deduces that the man on the billboard, Senator Hardgrave, must be the villain Gridlock. Bat-Mite confronts the senator, confirmed to be Gridlock, who then paralyzes Bat-Mite again as in previous issues.

Bat-Mite awakens in a home theater and Gridlock is giving him the chance to watch the unseen, original pilot of Galaxy Trek before dying. Bat-Mite convinces Gridlock to free him so that he can transport Gridlock into the pilot episode. After only there a short while, the characters believe Gridlock to be an enemy and Bat-Mite leaves him begging for his life. As Bat-Mite points out, however, the show is set in the 60’s so Gridlock will have a happy ending.

Emerging from the “fiction-verse”, Bat-Mite is shocked to encounter the Silent Sentry who is holding Weed and Reagan. Bat-Mite explains to Weed and Reagan that the Silent Sentry, Guardian of the Omnicrown, is there to take him away. The three say their goodbyes and Bat-Mite tells them that they are already perfect so he does not need to come back to “fix” them.

Bat-Mite leaves with the Silent Sentry and is soon standing before the three hooded figures we saw in the previous issue. They debate what to do to Bat-Mite after he caused so much trouble in the “unimaginative, gray, limiting dimension” as Bat-Mite describes it.

Instead of punishing him, they reveal themselves to be the Justice Mites of America and invite him to rejoin them. They give him a warning to behave to which Bat-Mite agrees enthusiastically and offers to be turned over to Human Resources should he fail. The issue ends with the heroes discussing the new threat before the League…Canceltron.