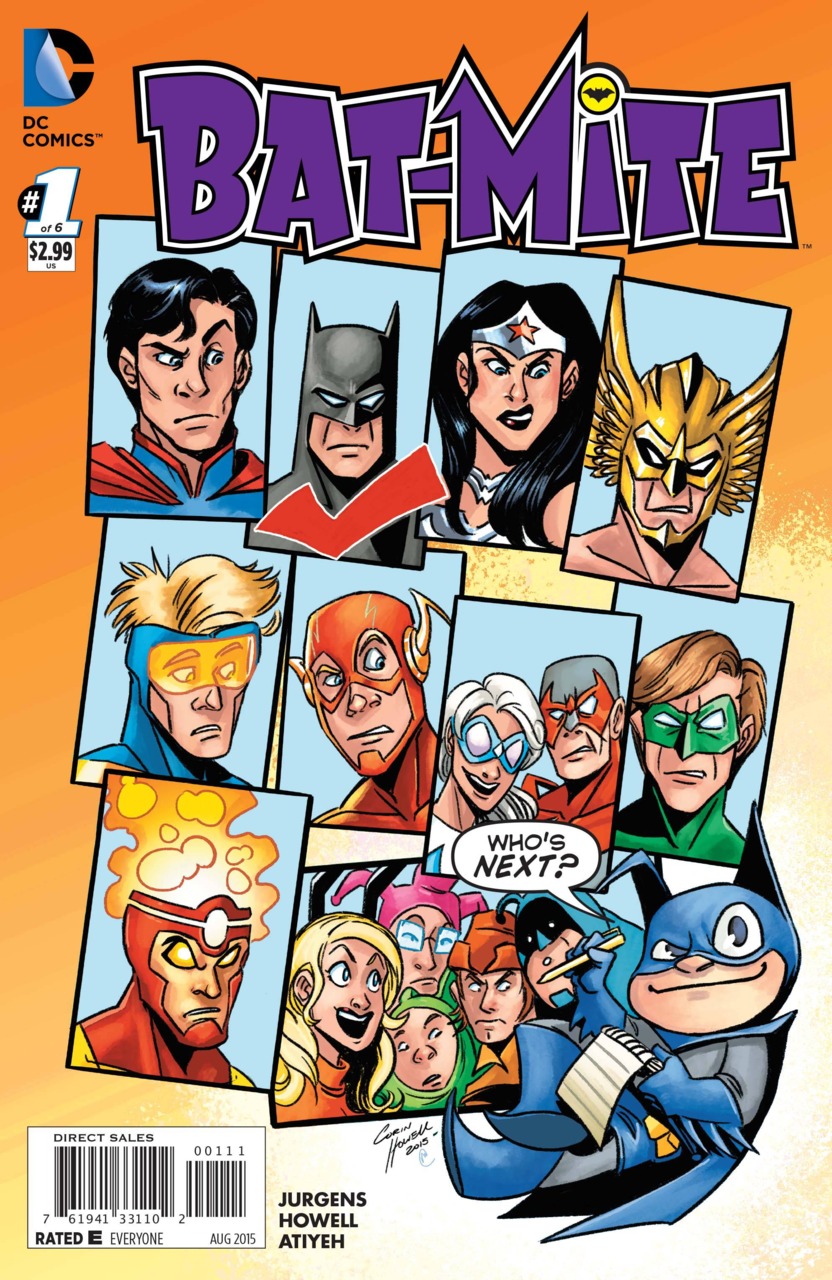 Editor’s Note: Please note that in addition to Issue #1 this reviewer also talks about the 8-Page Preview of “Bat-Mite” seen in the “Convergence” titles during the month of May

As we open in Gotham City, Batman is busy apprehending several thugs who attempting to get away with their stolen loot. As another thug stands on a rooftop nearby, ready to shoot a rocket launcher, he is quickly accosted by…cue the music…Bat-Mite! As the thugs comment that Batman must have run out of Robins, Bat-Mite prepares to knockout the rocket launcher wielding thug. However Batman shouts to disarm him instead…but as the punch lands, the launcher goes off and the building behind Batman explodes. Realizing his mistake, Bat-Mite is shot several times by the thief and falls to the ground in a grandiose, melodramatic way. As Batman rushes to save Bat-Mite, he quickly knocks out the thug…however Bat-Mite is infuriated when Batman calls him “kid” and rises into the air and quickly berates him. Bat-Mite makes several comments about his singing voice as well as therapy for Batman…he also notes that some analysts would love to see Batman smile more and be more comedic.

As Batman mentions that if Bat-Mite hadn’t interfered the building wouldn’t have exploded, Bat-Mite again tirades about how he saved the day…including the stock certificates which he magically produces. As the two argue about whether Bat-Mite can permanently help Batman, the imp quickly disappears and decides that he will have to help the other heroes as they need “major repairs.”

As the main story properly begins in issue #1, we are treated to a brief flashback that shows Bat-Mite in chains and being sentenced by an unknown group of beings. They state that he has “crossed a line” and the only punishment is death. As the hooded figures bounce ideas back and forth on how to kill Bat-Mite, they eventually decide on exile. As Bat-Mite disappears in a flash of light (amidst a torrent of pleading) the hooded figures comment that they are finally rid of him…and that he is someone else’s problem now.

As we cut back to the present, we witness the batmobile is in pursuit of a group men toting guns and wearing surgical scrubs. As the driver makes comments about the missing batlasers, batzooka and batpedoes the car isn’t able to make a turn on the cliffside road and plummets over the edge. Commenting that batchutes would be a good idea, Bat-Mite is revealed to escape the wreckage before it’s destruction. As the villains believe they have killed Batman, they turn to see the true Dark Knight standing in the road ahead of them. Leaping above the speeding car and tossing a smoke grenade inside, the villainous duo hit a tree and emerge shooting their guns at Batman…however he quickly swoops in and knocks both men out. Batman seems angry at Bat-Mite’s return while the imp himself is busy showing off his new gray and black costume (to make sure everyone knows that they are partners). Opening the truck, Batman reveals a kidnapped girl that the doctor villains had been attempting to abduct. As Bat-Mite is busy trying to take a quick selfie in honor of their success, Batman departs in the batwing to return the kidnapped girl home.

As Bat-Mite is left behind, a beautiful nurse appears and our “hero” falls head over heels in love with her…however, she turns out to be connected with the kidnapping doctors and knocks out Bat-Mite with some gas. Awakening in an Addams Family-esque home, Bat-Mite is introduced to Doctor Trauma who is, apparently, the greatest plastic surgeon of all time! However, Bat-Mite has never heard of her. Trauma comments that she is known for placing one’s entire brain in a youthful new body…thus extending their life. As Trauma pulls a hidden lever in order to trap Bat-Mite below…however, is flight abilities keep him from falling. As he starts to comment on how “real villains” wouldn’t use secret levers, the nurse knocks out Bat-Mite yet again with the gas.

Waking up below, Bat-Mite and the nurse pass by several rooms with other captured victims, surgical equipment…and a trussed up, unconscious Hawkman. As Bat-Mite attempts to free the hero, Trauma reveals that the kidnapped girl was supposed to be her new body…but now she will take Hawkman’s as her own.

I have to say that I was pleasantly surprised by this issue…not only by the quality of the writing, or the artwork (which greatly complements the story) but by the fact that I actually got a full story out of this! Let me explain. During the “Convergence” event we were treated to several 8-Page previews for the various new series and returning books slated for June. However, I was a tad concerned that we would be receiving the first several pages of each of these new #1’s…however this wasn’t the case. Not only did we get brand new #1 stories, but the previews acted as a true sneak preview and were their own stories unto themselves.

Okay, back to “Bat-Mite.” Wow. Wow…Wow…Wow. This is definitely something that bat-books needed. I can’t begin to describe the comedic writing by Bat-Mite…my review doesn’t even do it justice. If you haven’t picked up this book…do it now. Not only is it visually impressive as the art truly complements the story and reminds me of classic 90’s cartoons that I watched as a kid, by the story had me laughing out loud at several points.

Besides the comedy, I was a little intrigued by Bat-Mite’s predicament…what has he done to anger the hooded figures at the beginning of the story? Although one can probably assume he angered the “Q-like” figures by being a severe annoyance, it was interesting to see him being punished for his actions.

I am interested to see what other heroes will be appearing in the “Bat-Mite” book, Hawkman will definitely be another stoic figure that resents are titular character, but will he get to visit with other heroes who might enjoy or even encourage his antics…probably not.

Overall this was a great book and a nice departure from the doom and gloom of the other bat-books.