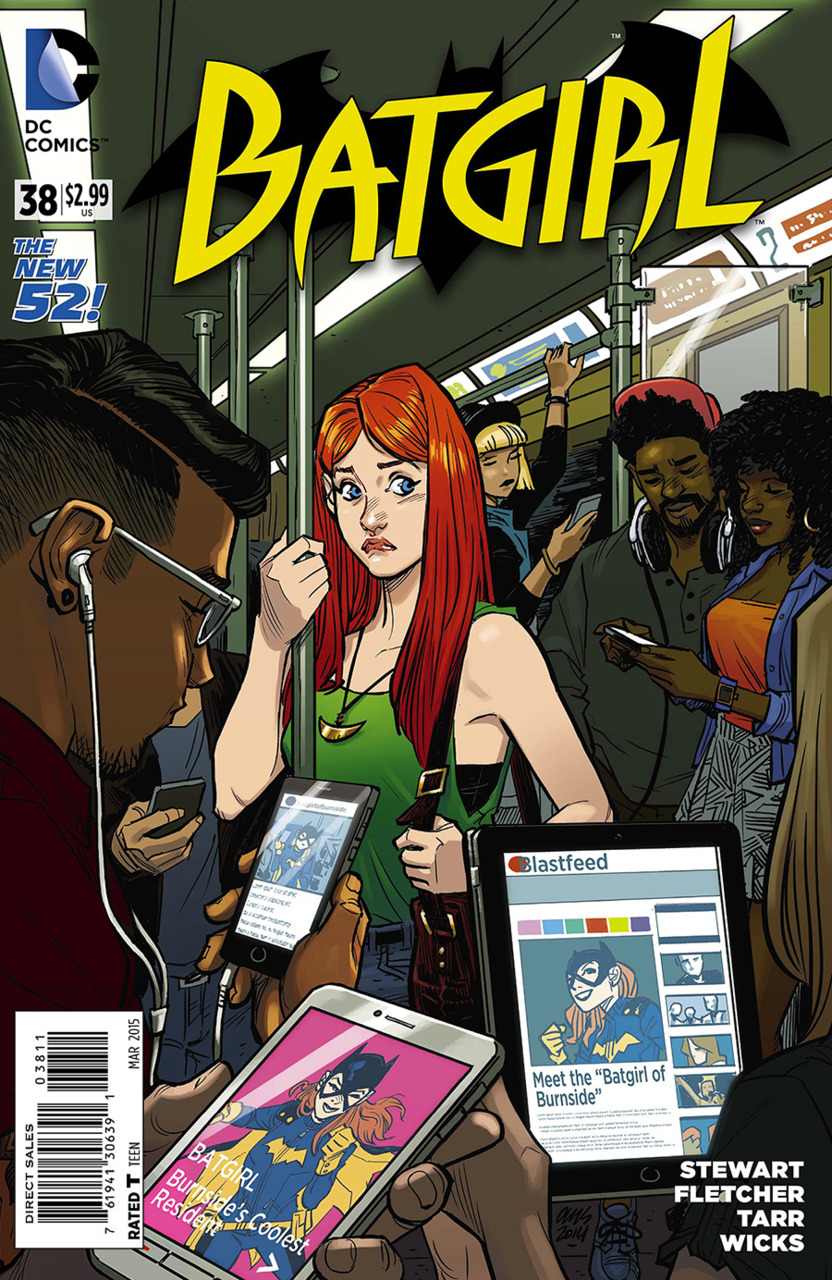 Batgirl’s Burnside’s newest sensation, and Barbara’s gonna make sure it stays that way! But at what cost? Oh, and Black Canary’s in a band.

MY THOUGHTS: I’ve read this issue three times now for the purposes of this review, and the one thing I take away from it is this: Your opinions on this run will depend entirely on your tolerance of its usage of millennial culture.

This was a very strong issue. In terms of proficiency in the writing, it may be the strongest so far. To make its point however, it drags Barbara down pretty low, and as a result you’ll be left deciding which matters most to you, the story or the character.

The point of this issue was to show how the recent changes in Babs’ life have been starting to affect her negatively, although that’s not readily apparent to her at first. The opening splash page depicts a montage of Batgirl saving the day in really awesome ways, and ends with a photo op and an advertisement to see her in person at some bar. The last time I remember seeing such a thing was in the 1997 film Batman and Robin, where the Dynamic Duo were guests at a thinly-veiled prostitution pageant. When I got to that image, I had to stop and really mull over the idea that this was going to be how Batgirl operated from now on. Selfies and live appearances at local bars and social media and everything we currently do in the year 2015. I quickly became very annoyed. Thankfully, Dinah Lance was there to shout some sense into her!

I’ve not been liking how Dinah’s been portrayed in this run so far, with the last issue taking it too far when she flat-out ignores Batgirl’s pleas for help. Thank God for her here though. When Batgirl whines about people finally liking her and the fact that she has friends, I thought to myself “She sounds like a freaking child!” which Dinah repeated in the very next panel. At that point, I felt a lot better about the book.

Here’s the thing about the “hipster culture” and its use in Batgirl so far. A lot of readers who have a problem with it don’t like it because it serves as a face for the most useless aspect of our current youth generation. “Hipster” culture in its essence speaks a very self-entitled, lazy, pretentious subset of the millennial generation (of which I’m a part of) that does hinge their lives too heavily on social media and technology. However what this issue proves, and what the book has done thus far is utilize the use of social media in our lives as it truly exists without pit falling into promoting it or glamorizing it like an advertisement for the new iPhone or tablet. So far I’ve dug Team Batgirl’s take on hackers and otakus and the art culture because it rang true in both the best and worst lights. What they’re doing in this issue is similar. They’re putting an aspect of our youth culture under a lens and applying a super hero story to it to see what happens. Specifically with Batgirl, they’re using the Simone run to further build up the character and push her to see where she goes. As a bit of writing, I really like it.

At the same time, this is not my intended take on Barbara Gordon. Now more than ever, I’m made aware that this is a dramatically different iteration of this long-standing character because she’s decidedly less mature than she’s ever been shown to be. There is no way someone can read this issue and reconcile with the idea that she was ever Oracle or Batgirl from Pre-new 52. As well they shouldn’t, as this really is a new continuity. I think for as much as I disliked the Simone run, that did feel like Simone was writing Batgirl as she interpreted from the original continuity, as opposed to a new version of her. Stewart, Fletcher and Tarr are doing the exact opposite. They’re taking that character and applying it with an idea of how “A” Batgirl would operate in the world of today, and to hell with how the character was before. It’s very jarring, but for the purposes of their book and the future of the character in accordance to how DC wants its company line to be, it’s honestly the right thing to do.

That’s not to suggest that Babs’ new sense of garish immaturity isn’t called out on in this story. I love the scene with Qadir where he throws out bits of common sense at every turn, asking Batgirl if it’s really worth her time to be chasing stupid reality stars. Batgirl’s a super hero, not a celebrity cop. The scenes with Liam expressing real hang-ups with Batgirl operating in Burnside were interesting too. It’s honestly not a scene or character beat we’ve never seen before, especially in any Spider-Man comic…but it was explored reasonably enough that it felt like it was going somewhere and not just for the sake of paper-thin tension that Barbara could ignore later on in the issue.

The one thing I could not get past was Dinah’s joining the band “Ashes on Sunday” as their lead singer. It was just…weird. There’s nothing wrong with it, it was just…weird. I was freaked out by it. The idea that Dinah’s really frustrated with Barbara and the one remedy to her pain is to yell in a microphone feels like a parody to me. Again, it’s not something the writers “must never ever do!” as it is a personal hang-up.

Overall this was a surprising story. It revealed the depth of perception the writers have for the story their telling and the character they’re portraying in a way I don’t see often with a lot of modern DC Books. Four for four thus far.