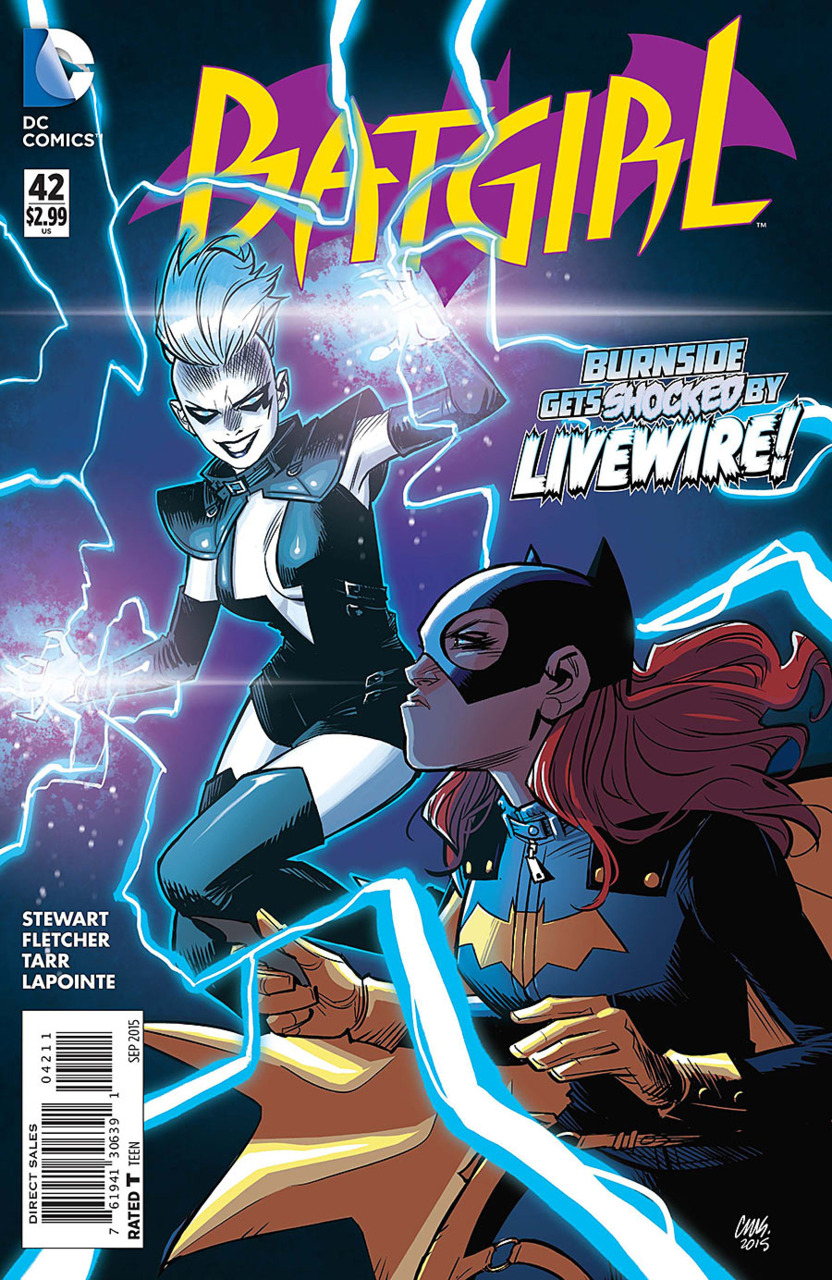 THE PLOT: Warned by the new Batman (James Gordon) that unsanctioned vigilantes are once again outlawed in Gotham, Batgirl attempts to apprehend the supercharged villain Livewire while avoiding the police and her father.

MY THOUGHTS: Concluding the mini-arc that started in issue #41, “Surge Protection” is an issue that isn’t groundbreaking or unique in any real way. The central beats of the story-Batgirl in conflict with her father, trusting someone she probably shouldn’t and working together in an uneasy alliance, were all hit pretty hard in the Gail Simone run, so in terms of fresh storytelling there’s not much to find here.

In actuality the dynamic between Batgirl and Gordon is flipped a bit more honestly and interestingly here because Gordon’s fully aware of the good the Bat-Family has done for the city and is not about just up and arresting them. He gives Batgirl enough information and time so she can keep one step ahead and as such any similarities to the Batgirl: Wanted storyline evaporate.  Gordon and Barbara make an interesting team, and I hope we see more of that in the future. Ultimately though, it wouldn’t make any sense for a guy who not only pretty much knew Bruce Wayne was Batman without admitting it but also figured out his daughter was Batgirl in the previous continuity to not guess that again sooner or later, so perhaps its best that this isn’t made a regular thing. There’s a point at the end where he’s staring blank into Batgirl’s face and I’m saying out loud to him how obvious her identity is. Babs Tarr is great at drawing different types of people with recognizable faces which are all their own, so there’s no one in the world Batgirl can be mistaken for.

I think the majority of my enjoyment in this issue came from the artwork. Although Jake Wyatt and Michel LaCombe provide breakdowns, Babs Tarr feels a lot less restricted than she did when Cameron Stewart was giving her layouts in the first arc. Her illustrations are bouncy and lively, and make this issue absolutely gorgeous to look at. It’s one of those wonderful situations where every panel is a joy to see. I’m still not really a fan of exactly how she draws Barbara with the consistently drawn-in pout on her mouth, but I’ve accepted that that’s how she sees the character. The first page where we see a recap page in Batgirl’s mind was great, reminding me of an old John Romita Spider-Man comic with great art to give readers the skinny in case they missed anything.

I talked before about how the plot wasn’t unfamiliar territory, but the fun was when the story developed its side characters. We see Qadir back into the book and are given implications that there may be sparks between him and Batgirl. At this point Barbara’s pretty much ensnared every non-villain guy she meets for more than one issue, but I always liked Qadir from the start, so I’m all for this. We see the return of Alysia with news that she’s engaged, so we know that’s headed for a tragic turn considering DC’s embargo on any wedding happening in the Bat-Books. We’ve not seen Jeremy Degroot or Nadimah in a while or for much of the run really. With the next few issues introducing Luke Fox into the book, one wonders if this cast will expand for just continue on with the people they’ve already introduced to work with.

I have to imagine this is a terrific issue for major Barbara fans. She owned every scene she was in, and was proactive, dominant and sassy throughout. It’s really a tribute to the massive amount of positive feedback from fans wanting this type of Batgirl character, so the fight between her and Livewire at the end was so one-sided, anyone now can go to it and say “THIS is what the character is capable of”. It was also nice to see that the main conflict wasn’t so much Livewire getting her down as it was the stress between her and the new Batman. You can only stand to read about her being depressed for so long.

I really enjoyed this, mainly for the art, but the story was solid as well.