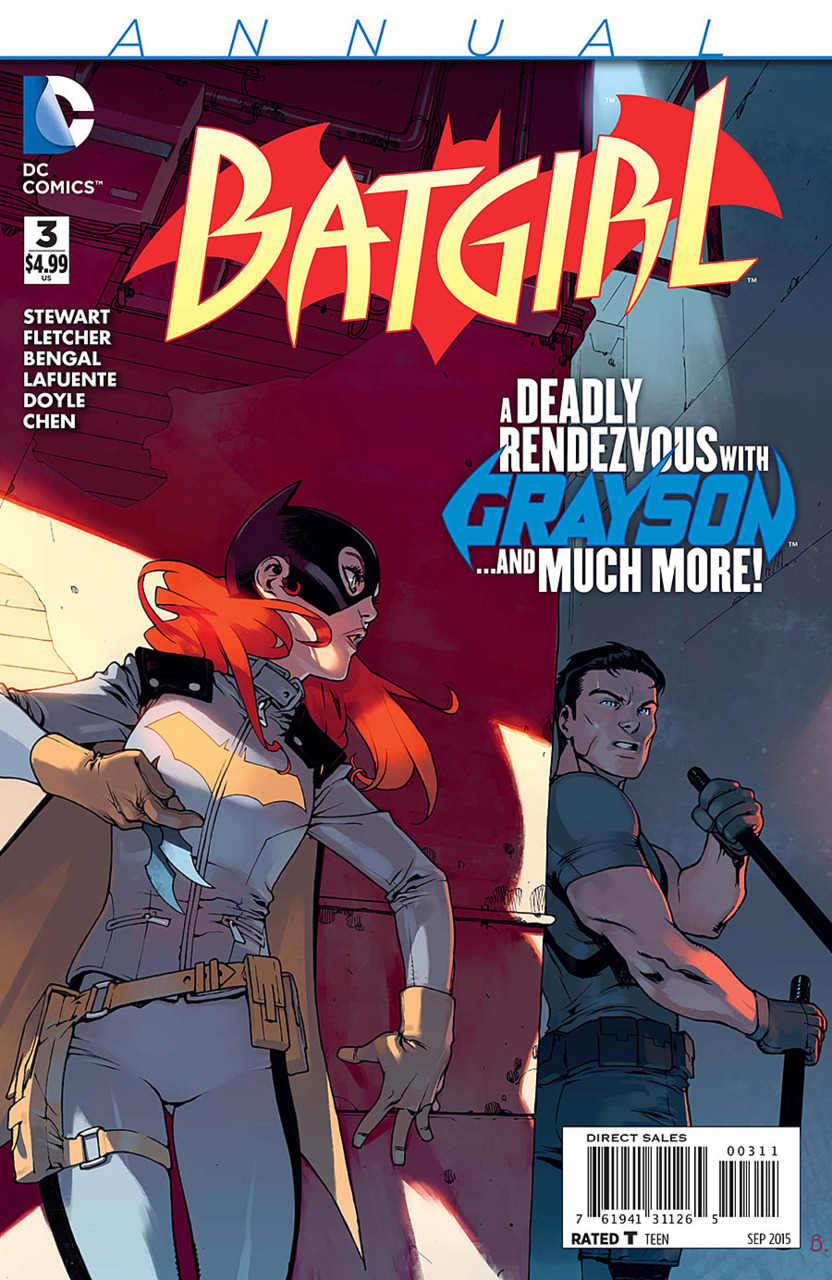 THE PLOT: A missing persons case leads Batgirl to chase a doomsday device all across Gotham, encountering various heroes along the way!

MY THOUGHTS: Annuals have mostly fallen out of style, with some books bringing them back just to add more comics to monthly solicitations. Before, they were meant for big stories which if not game-changing status quo disruptors were at least fun stories that wouldn’t be found in a regular issue. It’s rare to see an Annual worth our time these days and fans of the character the Annual promotes need more than just crazy done-and-one stories to justify its existence. Fortunately for Batgirl readers, this Annual offers four for the price of one.

As Barbara gets embroiled in a mystery involving terrorist groups, spies and doomsday machines, she runs across several heroes of the current Batman Universe. This was a fun and neat gimmick that had nearly every guest character interact with Batgirl in ways which built her mystique and offered up fun scenes of interaction. With Stewart and Fletcher writing the entire issue, consistency is kept from story to story, making this Annual a success and worth your money.

The first story with Dick and Helena is not much beyond an extended fight scene with the return of Bengal putting out some awesome artwork. I really enjoy the slightly exaggerated style he brings to Batgirl. It always looks as though someone’s being pulled or tugged from something, giving each panel a palpable feel of energy. Half of the story’s gag is Dick and Barbara enacting scenes like the first Spider-Man movie where Peter is avoiding Norman Osborn whilst in his costume unmasked. It all leads to a gag at the end that Barbara’s eidetic memory can’t help but spot Dick’s rear end from a mile away, which is great fun.

The Spoiler story was a bit more immediately interesting, as it’s the first post-Flashpoint meeting of two people who were very close in the Pre-Flashpoint era. I have to say that in terms of characterization, this take on Spoiler is a lot more hyperactive and enthusiastic than I’ve seen her be in forever, if not ever. She was written like she was on a sugar high, and it kind of made her out to be a caricature of the original Stephanie Brown. Ultimately it didn’t bother me too much because her fangirl-ish-ness with Batgirl was kind of warranted, and it lead for some nice scenes between the two. I hope that this take isn’t how she is all the time, because as written here she’s basically and older, white Maps. It’s closer to the mark than how she was written during Convergence however, so it’s not that bad. Just a minor nitpick.

The Batwoman story I was the least invested in, although it was solid all the same. I don’t know if this is the first meeting between the two since Batwoman beat Batgirl up in Simone’s run, but it was cool to see them work well here. I wasn’t grooving on the art which went for a grimier, more brutally realistic style. Coming after Bengal and David Lafuente, the drastic change in style wasn’t exactly appreciated, but I get that Batwoman’s typically depicted in that way.

The final story with Olive and Maps was great, and had me demanding for a multi-part crossover involving Batgirl and Gotham Academy. It’s read like a glorified cameo from another series in the sense of a television crossover, but that’s by no means a bad thing. The art was absolutely gorgeous, with Mingjue Helen Chen’s beautiful colors illuminating every dark scene with an almost Disney-esque style. Now that Maps has met Robin and Batgirl, I’ve gotta wonder if she has a costumed career waiting for her future.

Overall this was a simple story made better by mostly great artwork and solid characterization throughout that really sells this as a crossover issue more so than a Batgirl Annual. A very fun read that is worth your time.