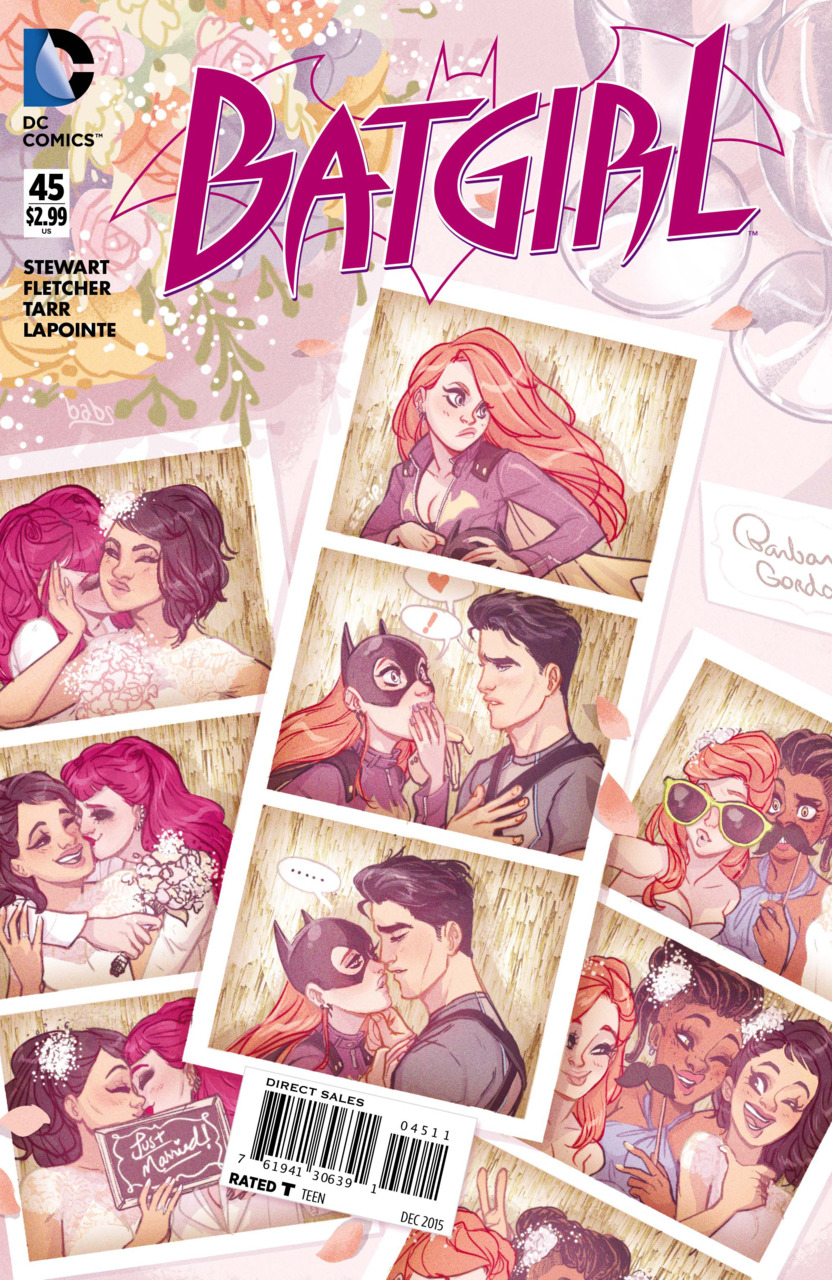 THE PLOT: On the day of Alysia and Jo’s wedding, Maid-of-Honor Babs gets a visit from an old flame in the form of Dick Grayson!

MY THOUGHTS: Right away I’ll say that this is a much better issue than #44. That has to be attributed to Babs Tarr. There are no layout or breakdown credits, no assisting inks; this is Tarr’s artwork unfiltered, helped only by Serge LaPointe’s great colors. I think Tarr’s storytelling method just fits Fletcher and Stewart’s scripts better than Bengal’s, so there were no jarring scenes or awkward moments of exposition. Plus there’s the added bonus of a pretty good story to work off of as well.

This is a soap opera issue, from start to finish. No bad guys, no MacGuffins, no city in peril. The tag at the end almost felt unwelcome compared to the general ease of the events in this story. It’s one I wasn’t expecting would pop up, and as a result it works as a type of filler issue albeit a very entertaining one. What I take away is that this kind of story between Dick and Babs has been done a few times over since the new 52, and it is exactly the same each time. This right now is the best with the best art, and it goes for the shippy romance without holding anything back. The characterization is nigh-spot-on and for once Barbara doesn’t come off as a hateful rage-a-holic as she’s tended to whenever interacting with Dick Grayson.

But the fact remains that this type of story-the idea that Dick and Babs just can’t be together even though they really want to and have been for a long time-has been done practically word-for-word almost annually for a while now. In Batgirl #3 by Gail Simone, Batgirl didn’t want any of the Bat-Family’s help and was re-establishing her crime fighting career solo. In Nightwing Annual #1 by Kyle Higgins, the two almost do end up together but can’t because…reasons. In this issue, we’re given a perfectly legitimate explanation as to why they can’t get together that fits within the current Bat-Continuity and the respective characters’ frame of mind. Dick faking his death forced Barbara to extinguish her feelings of pining after him enough for her to find someone else, and of all the days for him to show up, Alysia’s wedding was not the best one. The story forces Dick to be the bad guy but in a way that doesn’t make him look bad.

And that’s the thing with this recent string of Dick and Babs comics we’re being given. Ever since Nightwing Annual #2 Post-Infinite Crisis, the Dick and Babs relationship has been whittled down to the barest of character archetypes that don’t exactly go against character, but push the both of them into realms of recognizable archetypes that feel less true to who they always have been and closer to soap opera clichés. Dick is routinely written as a cad. A flamboyant playboy who lives up to his nickname and thinks with it all the time. Barbara is always written as the long-suffering girl-next-door who’s never-not fed up with Dick’s BS and is implied to be too good for him. As a fan of both characters, I really don’t appreciate this repeated idea of making either one so idealized or so unlikeable in those regards that it engenders the audience to take sides. Presumably, this builds on a relationship that’s been building since the 70’s in Batman Family when Batgirl and Robin would flirt with each other. If one continues to the Chuck Dixon runs on Nightwing and Birds of Prey however, when the two did get together, they’ll see precisely what makes the couple fit so well and need each other. Dick’s positive outlook helps Barbara who, as Oracle, had to push back feelings of regret and lack of self-esteem. Dick’s always been physically attracted to Babs (and vise-versa), but after a lifetime of crime-fighting he relates to her as someone who he feels he grew up with and admires her for her strength of will and persistence.

Admittedly, I am nothing if not a pretentious fan of the bygone Batman era, and I’ll keep saying that the stories prior to 2006 had a level of nuance and verisimilitude that the current era continuously lacks. But I feel that fans of the Dick and Babs ship keep getting hit with these “reality slaps” that persistently states why Dick and Babs can’t be together in ways that do not sufficiently explain why not. It feels more like an agenda of DC Comics to have the two apart in the same way that Green Arrow and Black Canary have been put apart for a while. I don’t understand why and I don’t think there’s a good enough reason which is why the past several comics that have attempted to explain why have sucked. Batgirl #45, then, stands above them all in that they use heavy events that would (or should) have rocked the Bat-Family and caused a seismic shift in everyone’s relationship. As much as I did like Grayson #12 for its continuity references, each of those meetings Dick had with the Bat-Family could’ve had their own issue. There’s very little sense of anguish, outrage or jubilation at the sight of Dick that everyone should be displaying properly. This issue works because we’ve had Babs’ angry (if relatively muted) reaction to seeing Dick again, so we’re allowed an additional incident where the two can get back to what we’re all really interested in seeing from the both of them, their romance.

As a result, this is the shippiest comic I’ve read in a while. The romance manga influence in Babs Tarr’s work shines through, especially with the particularly hunky design of Dick. There are a few panels near the end of the Dick and Batgirl scene which come straight out of Naoko Takeuchi’s Sailor Moon manga, where he might as well have been wearing a top had and white domino mask. Milking the romantic tension works well, especially comparing the dark and sterile artwork of the previous stories.

I still don’t get why Dick and Babs can’t be together in the long-run, but for this issue and the short-run overall, Team Batgirl has made it work well. I was agreeing with Babs all the way that Dick’s timing was callous to say the least, but the writing did Dick credit in having him come off as emotionally open and vulnerable. He’s not trying to blow off Babs’ day-plans even though he is.

Another bonus is the displaying of the Luke and Babs relationship, which is really good. For a speedy and altogether rushed courtship in the last issue, this one shows the two’s romance in a way that feels believable even though they’ve only had one issue to show anything. Luke might as well be a new character for me since I’ve not read any stories with him, but he comes off as a nice guy without being too good to be true. There is an undercurrent of Babs using him to better normalize her life rather than a genuine deep attraction to the dude, but we’ll have to see how it develops.

Overall this is a nigh-perfect story hampered by DC Comics’ bizarre mandate of keeping Dick and Babs apart. If it has to be done, this is the best way to do it, with terrific art to go along.