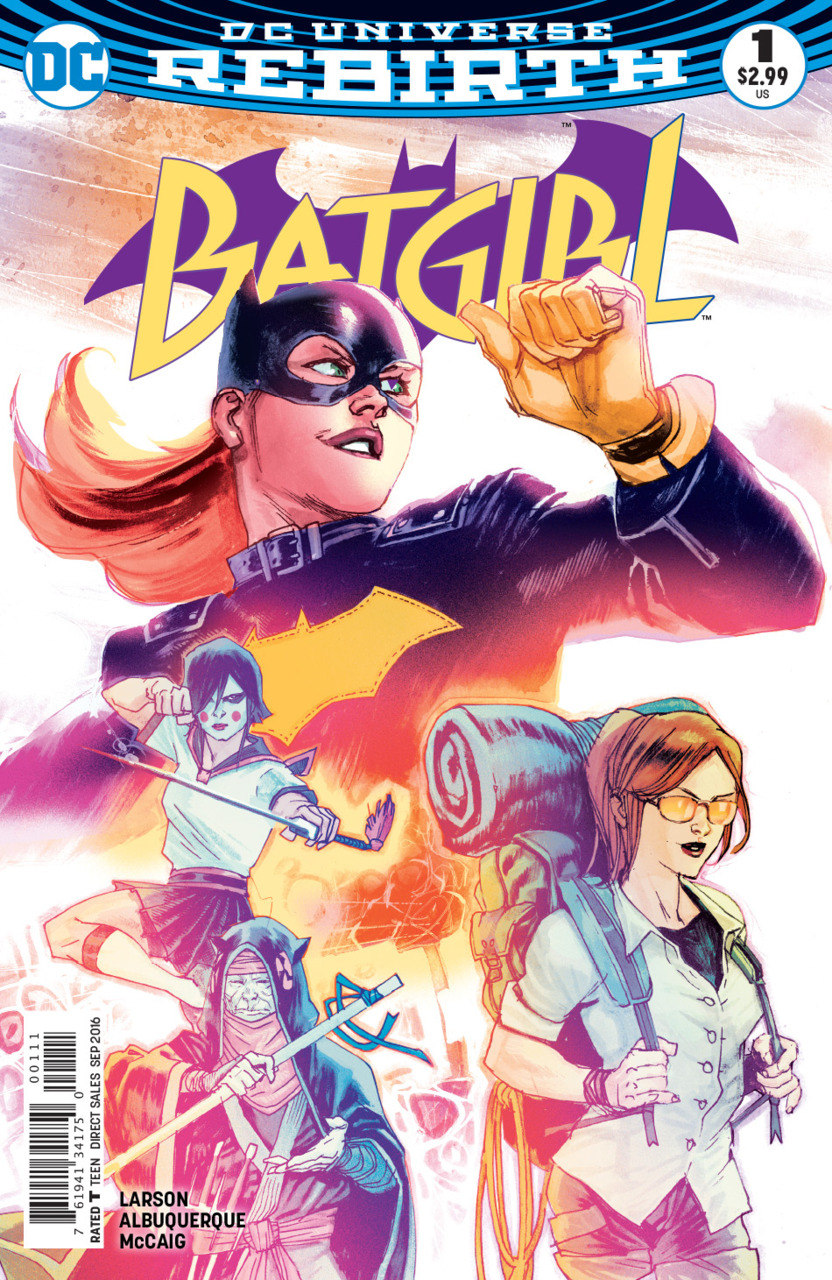 In Brief: Batgirl (Barbara Gordon) ventures beyond Burnside to travel Asia, starting with Japan, where she meets old friends and even older inspirations.

Summary (Spoilers): In Japan, a tourist is beat up by a school-girl/facepaint-themed costumed figure. Batgirl jumps in to save the guy, and the scene shifts to a day earlier, as Babs arrives, fully decked out as a traveler with backpacks, smiles, and sunglasses galore. As Frankie assures her by phone that her company and friends in Burnside are fine without her, she checks into her hostel and meets her roomate, who turns out to be her old friend Kai from Gotham (who also happens to be the tourist Batgirl saves in the opening of the book). She tells Kai the purpose of her trip is to meet the ancient (over a century old!) superhero the Fruit Bat. They reminisce over being cops’ children, and Kai fills Babs in on his somewhat troubled past, though claiming to have turned over a new leaf.

After munching on some octopi (Babs enthusiastically, Kai not so much), Kai drags Babs to get drinks. Sadly, Kai reacts poorly to something he ingested, and Babs helps him to a restroom in their hostel.

The next day, Babs and Kai meet the Fruit Bat and her son. The Fruit Bat answers Babs’s questions with silence, and her son treats his mother dismissively, leading Babs to an irritated reaction. Before more can happen, though, the opening catches up with us, and Babs as Batgirl fights the costumed schoolgirl attacking Kai.

The girl is accosted by the costumed Fruit Bat, who demonstrate incredible knowledge in combat. Outmatched, the girl flees from the ancient hero, and Babs greets her eagerly. The Fruit Bat tells Babs that she is able to act before an attack, but starts to have some kind of health problem (possibly a heart attack), gasping that Babs must see the future by overcoming her past, and mentioning a “teacher.” Fruit Bat commands Babs to flee, and she does, pondering. A giant sign for the “Future of MMA” attracts her attention, prompting her to take Kai to Singapore, both to pursue this “teacher” and to learn Kai’s dark secret.

In Depth: Welcome to your new Batgirl reviews! Apologies to those wanting a simple summary and review with maybe some thoughts tacked on, but I’ve been wanting to do a piece like this for over a year now, and I finally have the opportunity to do so with this newly relaunched Batgirl title. To get to my rating and closing thoughts, just skip down to the “Pick up/Pass” section.

Batgirl, in all of her incarnations, is probably the most visible female superhero in the DC Universe after Wonder Woman, and definitely the premier female superhero in The Batman Universe (Batwoman is, in universe, stronger and more dangerous, but lacks the history of any of the Batgirls, and thus doesn’t come close to matching her profile or public awareness.) As such, the way DC has chosen to market and produce the Batgirl title requires some analysis. In the past 15 years, five solo Batgirl titles have launched – Cassandra Cain’s title written by Kelley Puckett, Stephanie Brown’s title written by Bryan Q. Miller, and three titles for Barbara Gordon written by Gail Simone, Brenden Fletcher and Cameron Stewart, and Hope Larson (Note: I’m counting the Burnside run as a new solo title because though it shares continuity with the Simone run, it is as different from that run as the Larson run is from it).

Plot-wise, each of these five series take a different tack. Puckett structures his first issue with Cass as a parallel flashing between her training as a child and her apprenticeship to Batman and Barbara Gordon in the present. Though Miller does present some flashbacks to set up Steph as Batgirl, he mostly presents a quick series of scenes full of contrast both in pace and emotion, much like an action television show. Simone also structures her story like a television episode, but one in the serial killer genre, focusing on the crimes the villain commits, interspersed with Barbara setting up her new life. Contrastingly, Fletcher and Stewart present Batgirl like a sitcom, spending more time out of costume dealing with real life woes rather than the costumed fight for justice. Larson seems to skew closest to Miller in plot, using the classic flash-forward action scene opener then rewind to set up Babs in her travels. Ranging from dark crime procedural through action comedy all the way to sitcom, the plots of these five series provide excellent indications of their overall direction.

The way each series focuses on their main character also highlights their different approaches. Cass’s desperate drive against her upbringing, to connect with those she cares about (which, by the end of the series, is revealed to be every single person she meets), shows the melancholic nature of those caught up in Batman’s noble but futile battle against evil. Steph, on the other hand, careens recklessly and joyfully from conflict to crisis, embracing life fully. Simone’s Babs jumps fully, but carries the sting of regret and uncertainty in her restored mobility – and furthermore, Simone tended to focus much more on the horror of her villains than the agency of her heroine. In Burnside, Babs regained centrality in her own narrative, but sadly, skewed to the immature and whiny when dealing with her candy colored threats. Wisely, Larson keeps the focus on Babs’ concerns and desires from Fletcher and Stewart’s run, but gives her a sense of intensity and seriousness to match her achievements.

In every long-running series, the status quo allows the writers to structure new developments around a familiar setting, allowing new readers to jump on without too much difficulty. Each first issue of these five series sets up such a status quo. Cass’s regular patrols, battles with street level criminals, and struggles with her past all appear vividly in her debut issue. Since Steph started her run as Batgirl as part of a larger plot, her status quo in the struggle to balance heroing, school, and her mother only appear only briefly, but form the trusty framework for her future growth. Simone sets up Babs’s social surroundings quickly, but the tendency of the villains’ actions to drive the plot rather than Babs’ goals appears in the way the first murder opens the narrative without any connection to Batgirl, and Batgirl fails miserably in the closing of the issue. In Burnside, the main settings of school and room dominate the opening story, as well as Babs’s quick cheerful heroing. Babs’s travels from the status quo for Larson, ensuring that while the setting might change, the enduring character drives of Kai’s secret and Babs’s search for training provide the throughlines anchoring her stories.

As the analysis of plot, characters, and setting establishes, each of these series have vastly different thematic concerns, which naturally appeals to different audiences. Though artist Damion Scott’s exaggerated, incredibly appealing art seems to signal a younger target readership, Cassandra Cain’s adventures fit firmly in the main readership of Batman, a darker, noir-inflected, somewhat despairing tone for older teens and adults who like their Batman world weary. Bryan Q. Miller clearly shot for young teens to college aged readers with his emphasis on Stephanie’s attempts to balance her school, family, and masked extracurriculars, and though the world of Gotham can never be entirely free of darkness, managed to keep the adventures engaging for a wide range. Simone shot much, much higher, weaving in themes of PTSD and political activism for an older crowd, while Fletcher and Stewart point the book straight back down at younger audiences. Keeping with the Rebirth line’s theme of mature optimism – history and hope together – Larson brings Babs’s maturity level up a bit, while keeping the tone and themes fairly open to a wide age range.

Batgirl – as a character and a title – presents a problem for DC. Who should be reading the book? Who are her fans? Each of the five solo titles which bear her name have a different answer, and only time will tell what will last.

To focus solely on today’s issue in my conclusion, Larson has found an excellent collaborator in frequent partner of Scott Snyder Rafael Albuquerque.  Known primarily for his work on American Vampire, a dark, violent, emotional historical fantasy by Snyder that highlights Albuquerque’s horror abilities, the choice of Batgirl as his next project shows an artist not afraid to explore new avenues.  In 2008, Albuquerque penciled a story for the Robin/Spoiler Special featuring Tim Drake and Stephanie Brown (written by the great Chuck Dixon) which had a very similar tone and target audience as Larson’s Batgirl.  However, his art here is a lot sketchier, with rough outlines giving energy to his characteristic elfin facial designs. Hopefully the art for Batgirl will reflect the same intelligence and appeal that Albuquerque has brought to his more mature work. The title of this first arc, “Beyond Burnside,” gives a sense of continuity while differentiating the story from what came before.  However, hopefully the story will transcend a mere negative, and provide a new Batgirl story that will stay with the character and fans for a long time.

Pick up/Pass? If you’re looking for a new direction that still manages to honor the spirit of Batgirl’s past, pick it up!

In Conclusion: Combining humor, cute and accomplished art, and a whimsical and fun-loving yet action-packed approach, the new Batgirl team starts us out on our new adventure.