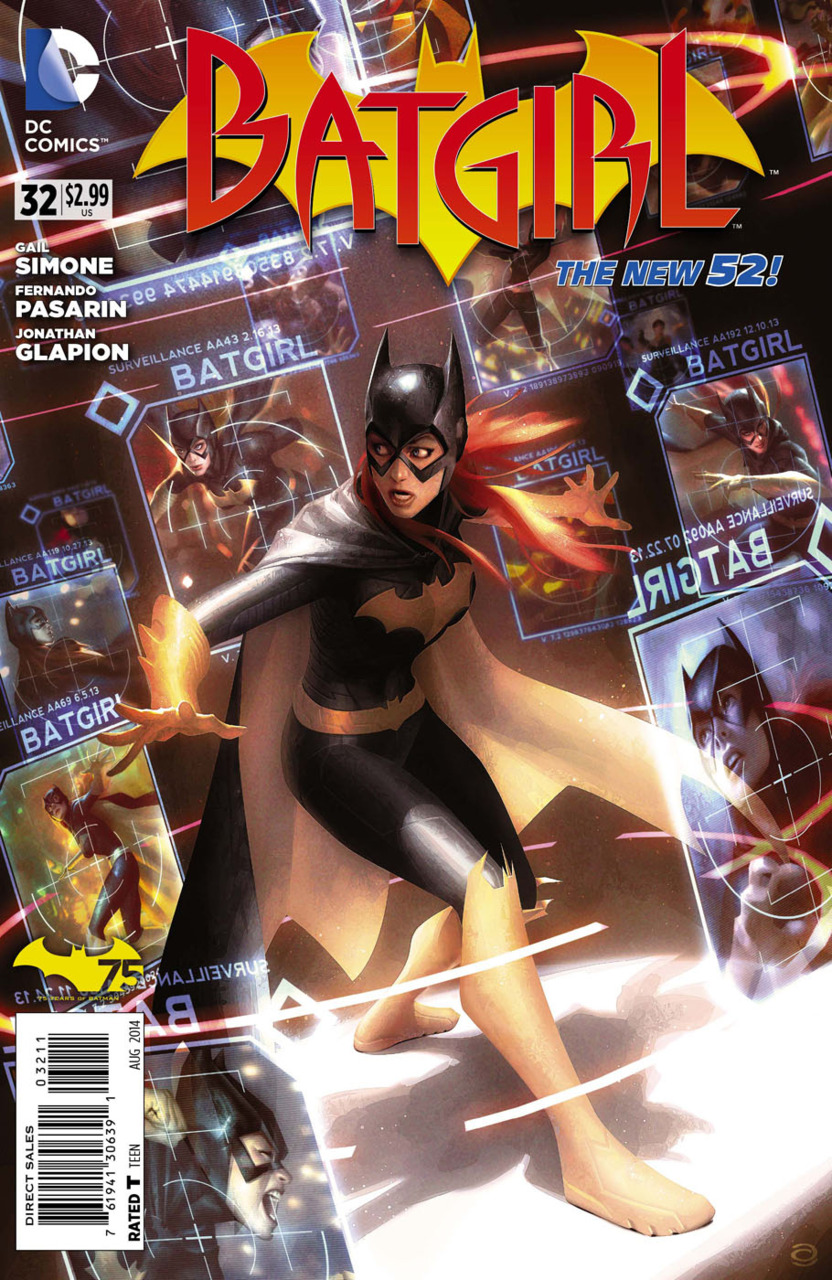 Alright, guys. I gave Batgirl a try, because I'm at home, sick, and have nothing else to do. This is the first time I've read Simone's Batgirl, so these are all fresh takes from a new reader.

Alex Garner's cover is pretty sick. It reminds me of Alex Ross, but not quite as realistic, and his coloring has a softer tone to it. I may even like it better.

Simone has said over and over again that this is the best art team she's worked with. And the team puts out some nice work, but I would like it better if it was a little more unique. It's just a little to streamlined for me.

As for Simone's story, I had some problems with it. But let's save that for after the summary.

Batgirl takes down a group of "pros" who have robbed a bank with high-tech weaponry. She chases after one who got away, but is gone by the time she makes it up to the roof.

Sally (Bonebreaker) brings Knightfall up to speed on the raid, and Knightfall is furious when she heard about Ricky suing Gordon, and has Sally go talk to him.

Barbara goes to the goes home, frustrated that she couldn't find the weapon caches, and walks in on her roommate, and her girlfriend. Awkward.

Sally finds Ricky, who is on a swing trying to call Barbara, and she threatens him.

Barbara goes for a jog the next moring, but is captured buy a woman she used to know, who faked her death, and is now a spy. Sound like someone else we know? She offers Barbara to do the same, but she refuses.

After they drop her back off on the street, Ricky calls Barbara, and tells her that Knightfall sent him, through mail, the hand of his brother, who is in prison.

Barbara meets up with Black Canary and Huntress later that night to fight Knightfall.

Sounds pretty straight forward, right? That's because I cut out the crap that happens in between. Simone references Gordon being in jail several times, dramatically changing the awsome character of Barbara Gordon that John Layman wrote in Batman Eternal #4. She was consumed with finding the truth there, but now, just mentions it. She has more important things to do now. The "pros" that Barbara fights in the beginning, are not "pros" at all. She beats them down easily. Even shattering their teeth (what's up with that?). Knightfall asks Sally who disrupted the earlier raid, and Sally responds "Who else? Batgirl" like there's no other vigilante in Gotham that they'd worry about. Ricky is a huge whimp. I don't even know why Barbara likes him. He's crying constantly. And Simone beats us over the head constantly with James being "dead" when we know he's not, and Gordon being in trouble for shooting Ricky. Which, after the train situation in Eternal, that Simone references taking place at this time, the big story is some no-name whimp thug getting shot?! Please!

I didn't like what I got with this comic. Where the dialog is awesome in Batwoman, it all feels forced in here. The only thing I found interesting here was the woman Barbara knew from her childhood, who is now a spy. And the art was deceit.