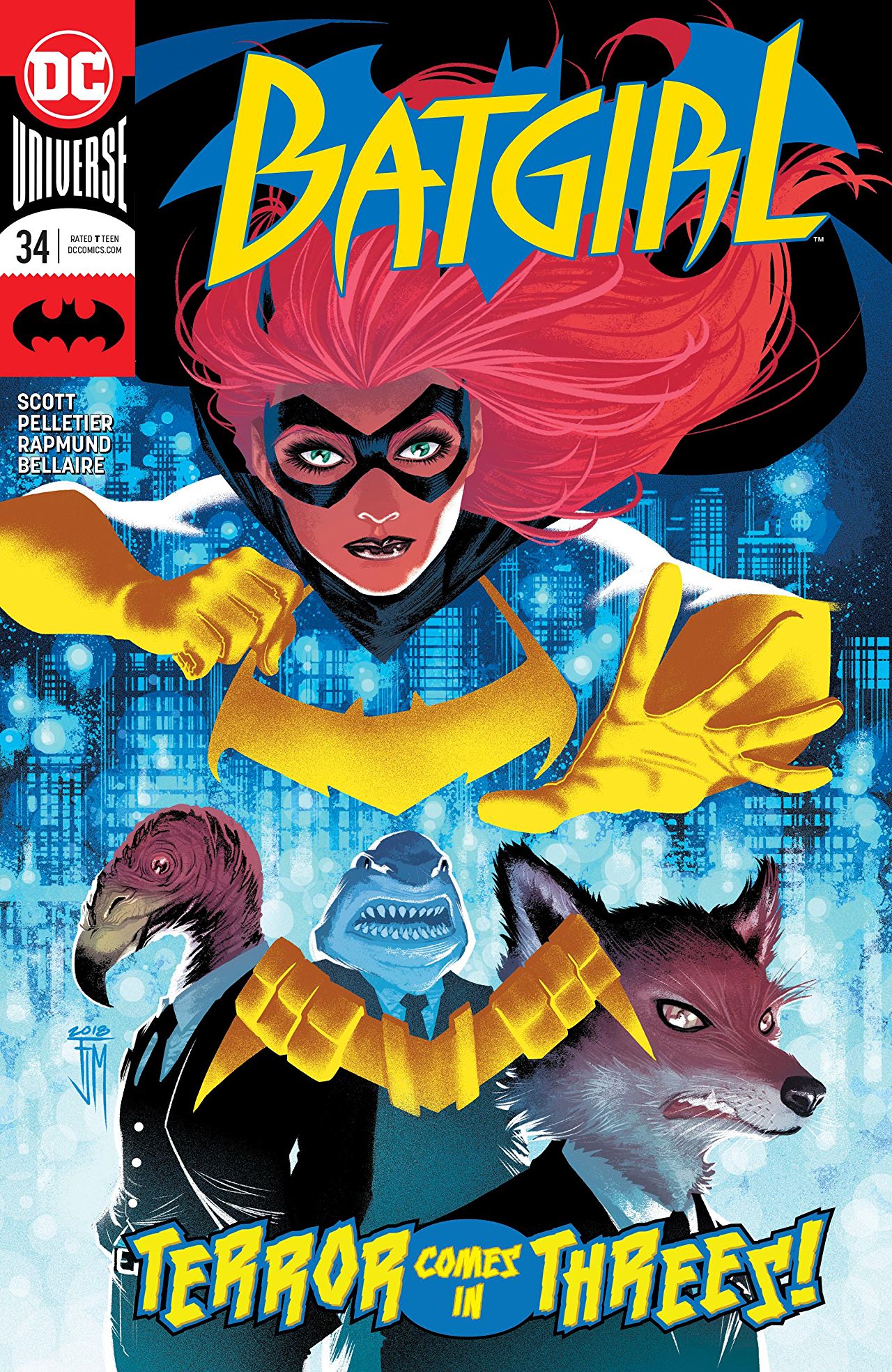 Overview: The Terrible Trio are in Gotham and were behind Cormorant’s attack on Congresswoman Alejo. Since they haven’t given up on controlling Gotham yet, can Batgirl stop them?

Synopsis (spoilers ahead): It turns out that the Terrible Trio: Fox, Shark, and Vulture were behind the attack on now Congresswoman Alejo. They have investments in Blackgate Penitentiary that fund their impending crime wave so they don’t want it to be shut down. Shark is angry at Fox for arranging to have Cormorant kill the candidate, a plan which failed. However, Fox assures the other two that Alejo will be tied up in committees so Blackgate won’t be in danger. Fox doesn’t seem to be too concerned with Batgirl snooping around and the others warn him that she could be trouble.

Barbara Gordon dons her Batgirl suit to parkour across town to the Alejo Headquarters. They are celebrating their election victory. The office is shocked to find a package delivered – it contains a severed human hand. Also in the package is a note threatening Batgirl.

The GCPD stops by to pick up the appendage, but not before Babs gets a blood sample and fingerprints as well as the ring on a finger. Alejo tells Commissioner Gordon that she can now help him with bribery problems in the police but Jim takes offense. Babs stands up for Alejo and announces she is moving out of his house. She is also upset about Jim knowing about James Jr. getting out of prison.

Back at her home base in the Clock Tower Batgirl examines the blood, ring, and fingerprints from the package. They all belong to different people but when she investigates she finds that they have all received invitations to a nightclub called ‘The Den’  for midnight tonight.

Babs’ business partner Alyssa is trying to get in touch with her. When she finally does she tells her that their investors are threatening to freeze their assets. They have a four-thirty in the morning meeting that Barbara will try to make.

Batgirl goes to the nightclub and finds Fox to ask him what he is up to. But it is a trap. The other members of the Trio have her cornered.

Jason Bard goes to Babs’ new apartment but finds that her check bounced and all of her stuff is in a pile outside. Yikes.

Back at the nightclub, the Terrible Trio announce to all those in attendance that they are going to take over Gotham. The folks have to cooperate because the Trio is blackmailing them. They show the crowd that they are serious: they have Batgirl tied up hanging upside down in a tube. Uh oh.

Analysis: Writer Mairghread Scott’s story takes an unexpected turn with the Terrible Trio exposed as the big bads. Last month’s issue seems to have been a detour and perhaps more about the Batman Who Laughs DC event than the Batgirl story arc.

We see more friction between the Gordons. Babs is acting like a brat. She is also ignoring her business, which will surely be a problem. And she is letting movers handle her move without her being around to supervise. Really?

All of this seems out of character for her. This characterization issue has been a problem for a few issues now and is frankly getting worrisome. Is there a valid and interesting plot reason behind this like perhaps her recent spinal problems have caused some kind of mental break? Or are these just writing choices? It isn’t clear.

The pencils are by Paul Pelletier, inks by Norm Rapmund, Jordie Bellaire is the colorist, and letters are by Andworld Design. The art in the book is excellent. Some of Babs’ detective work is done in dark blue rooms. Some action pages are done in vivid red hallways. Faces are expressive and show character.

There are some interesting page layouts. One shows a full page width image of Batgirl’s eyes. Below are the three people connected to the severed hand, their images all in a row. Below each image is the text describing their connection to the hand. And below those are images of Batgirl investigating their situations. It is an elegant and efficient visual storytelling.

This is a book I am going to continue to read though I hope the characterization issues are resolved or explained soon.

Final Thoughts: Barbara Gordon gets herself into trouble with the Terrible Trio, her Father, her new apartment, and her business. Can she get it together to overcome all of these problems?