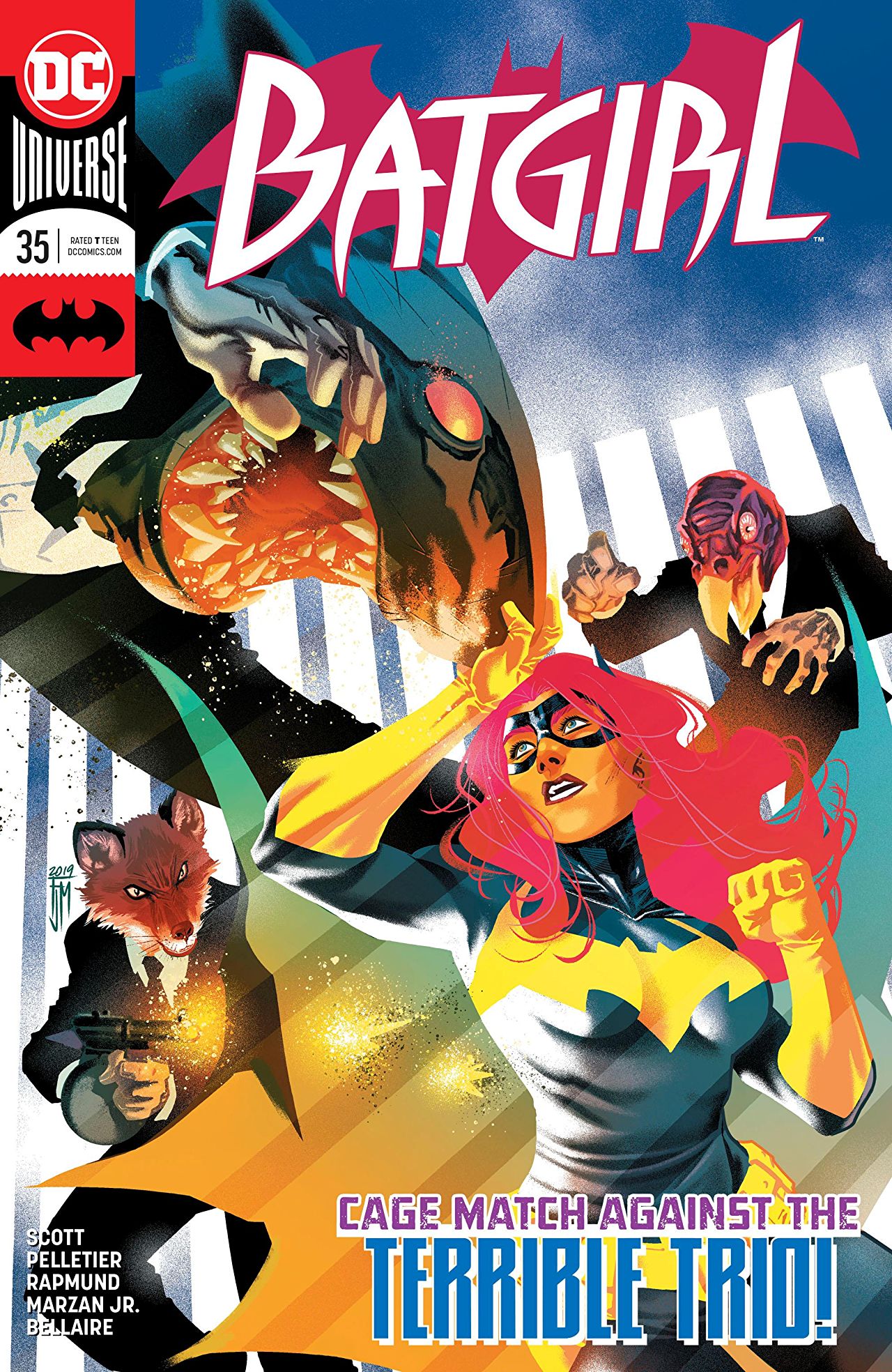 Overview: As Batgirl is occupied with escaping a death trap at the hands of the Terrible Trio, her personal life as Barbara Gordon faces several setbacks.

Synopsis (spoilers ahead): Batgirl wakes up suspended upside down in a tank on a stage in the Terrible Trio’s new nightclub, “The Den”. Batgirl takes note of Vulture being displeased at Fox disobeying her orders about not involving Batgirl in their plans. Fox continues to make his pitch to Gotham’s underworld, offering The Den as a judgment-free place that clients can explore fantasies and desires like animal cruelty and sexual torture. As Batgirl frees herself from the straightjacket that the Trio bound her in, the tank begins to fill with water. Batgirl tries various gadgets, but the glass doesn’t even crack, as Fox accounted for all of her gadgets.

Meanwhile, Alysia preps for her meeting with the new stockholders at Gotham Clean Energy. Jason guards Barbara’s belongings on the street, after finding her landlord tossing them out in the previous issue, as Jason gets fed up and calls for movers to bring her things to his place. In the meantime, Alysia’s meeting with the stockholders takes a turn when they seem displeased that Barbara isn’t at the meeting and proceeds to refer to her as an employee.

Back at the Den, Batgirl’s tank is rapidly filling up as the crowd watches. Batgirl manages to escape by activating the emergency parachute in her backpack, which forces the lid off the tank and she escapes.   Batgirl then faces off against Shark, and after goading Shark to make him angry, Shark injects himself with a compound that causes his muscles to double in size and Shark charges at Batgirl as an electrical fire in the club spreads.

Alysia’s meeting continues to go downhill, with the new stockholders advising Alysia that this is a hostile takeover and threatening to release the company’s connection to Poison Ivy if Alysia doesn’t sign over control and cut Barbara Gordon out of the company.

The issue ends with Fox and Vulture bickering as Batgirl manages to subdue Shark by jamming her arm spikes in his eye and then turns around to ask who’s next.

Analysis: This issue was paced well, and managed to make what is essentially a single action sequence play out over the length of the issue without feeling drawn out. I like how Barbara immediately goes to work trying to escape. Arm spikes don’t work? Try the grapple gun. The parachute escape doesn’t feel like it is out of nowhere, which is one of the advantages of playing with a relatively new costume design (and more on that design in a minute).

The back half of the issue features Batgirl severely outmatched by the hulking Shark. I thought it was interesting that rather than outthink her opponents as she did to get out of the death trap, Batgirl essentially beats Shark by out brutalizing him, which is a side of Batgirl that we don’t see very often. The fight between Batgirl and Shark is fairly well executed, although I feel like whatever compound Shark stuck himself comes a bit out of nowhere and makes Shark feel like a Bane knock-off in a sillier mask.

I like how Barbara’s life is under attack on multiple fronts. I think its interesting to have her so focused on fighting crime that her personal life suffers and I think that the complications of defeating the villain to find that she no longer has a place to live, or potentially a way to earn a living which I think helps Batgirl stay relatable in a way that a character like Batman can’t. I like the potential of taking away Batgirl’s support structure when she’s not paying attention and then seeing how she deals with it.

On the art front, Paul Pelletier handles the action of the issue well.   I do find that the anatomy of the masks of the Terrible Trio, Shark, in particular, don’t really make line up with human anatomy.   Batgirl stabs Shark in the eyes of his mask and blinds him, but that doesn’t seem to line up with where eyes would go. It’s a nitpick, but I found it distracting. I also think Pelletier, whose work is consistently solid, has a style that makes the current Batgirl suit look a little silly, but again, I think it’s a function of another costume redesign that, much like Greg Capullo’s Rebirth Batman suit, doesn’t really work when its drawn by anyone other than the guy who designed it.   Pelletier’s style is very matter of fact and compared to Sean Murphy’s designs for Batgirl. It is just a lot of grey, a grown woman wearing Bat Ears in her hair for no reason and a mask that wouldn’t hide her identity from anyone. It just doesn’t work from me here.

Final Thoughts: This was a solid middle issue for this storyline and I’m interested where it its going. I like the idea of continuing to shake up Barbara’s personal life and hope this continues going forward.