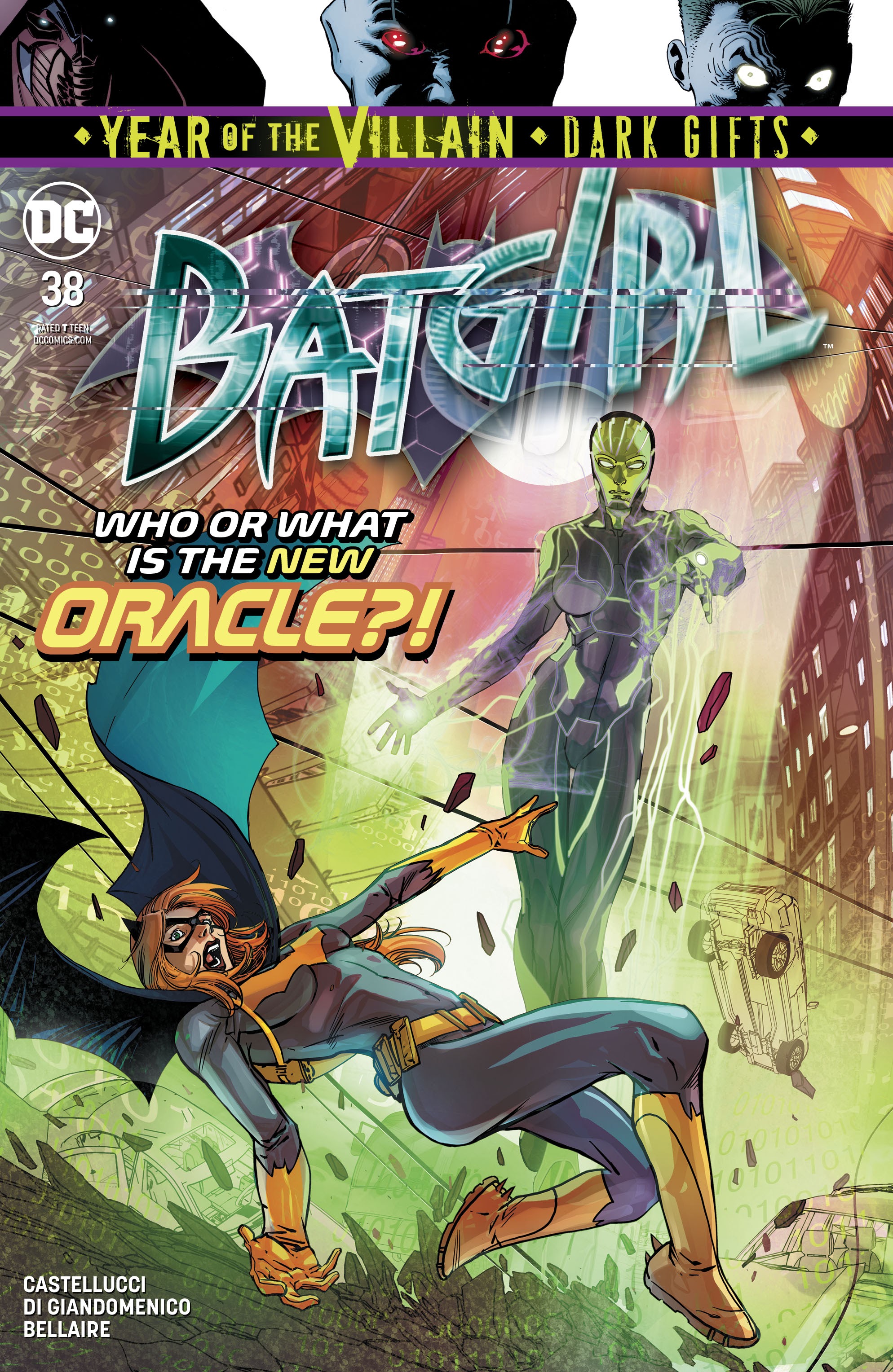 Overview: Batgirl recovers from her last battle with Killer Moth and prepares for the next thing as the Oracle entity looms in the background.

Synopsis (spoilers ahead): Batgirl pulls herself from a pile of rubble of a collapsed building and uses a batarang to activate a sprinkler system to short out the nanobots that Killer Moth attacked her in the previous issue.

Meanwhile, the hologram of Lex Luthor speaks with the android Oracle, with Lex explaining that once she helped people but now, she has been abandoned. As the Terrible Trio look on, dumbfounded, Oracle takes exception to being thought of as useless and before Luthor’s hologram fades away, he warns the Terrible Trio to stay on Oracle’s good side. As Oracle begins to search the web, the Terrible Trio remember that someone with the name “Oracle” used to take down criminals.

Batgirl limps away, her costume in tatters, and is forced to take the subway home, where a passerby mistakes her for homeless and gives her money and a jacket. She returns to her new apartment where she goes about replacing her costume with odds and ends from spare costumes and then falls asleep covered by her cape.

The next morning Barbara wakes up, covered in bruises and at her job at Congresswoman Alejo’s office, Jason Bard comes to her, concerned she is in an abusive relationship.

Oracle conducts a search of the web, invading computer systems of the GCPD, Hall of Justice, and the Batcave. The Terrible Trio panic and Shark attacks her, only to be snared with a bunch of wires. Oracle orders the Trio to take her to Gotham City, with Fox briefly protesting before being grabbed by the throat.

Meanwhile, Barbara takes Jason to the gym where she trains to explain her injuries. She has a deal with the owner where as long as Barbara contributes to the owner’s charity the gym owner covers for her and doesn’t ask any questions.   Barbara gets an alert on her phone about a nearby robbery and rushes off, wondering why she feels guilty about leaving Jason. Batgirl begins a very public war on crime, as Killer Moth watches footage on tv, furious that Batgirl survived the fight.

The Terrible Trio agree to take Oracle to Gotham, telling her they have a contact, Ada Lake, who works with artificial intelligence, and they drive off, with Vulture planning to use their contact to break Oracle down for parts. They arrive in Gotham, with Lake wanting to examine Oracle. Oracle detects that Lake is a threat and quickly kills her. As the Trio try to convince Oracle that they are her friends, Oracle’s search of the web leads her to identify her creator, Batgirl.

High over Gotham City, Batgirl and Killer Moth battle, with Killer Moth again trying to use his new tech against her. Batgirl uses a signal jammer to disable all of Moth’s toys, and Batgirl begins to rain down blows on Moth as they crash through a window into a tech conference where Alejo is addressing the crowd. As Batgirl ties Moth up and hands him over to the police, Bard tells Batgirl that she is a menace. Moth warns Batgirl that someone is coming for her.

The final page is a split-panel with one side featuring half of Batgirl’s face and the other half of Oracle’s face. While Batgirl decides to activate the Oracle system to find out what Moth was talking about, Oracle begins to run a new program: Destroy Batgirl.

Analysis: This was a busy but very tight issue. Writer Cecil Castellucci doesn’t waste a single page and manages to move the story forward at a brisk pace, and I like that the story quickly moves through the Killer Moth plot to get to the real meat of this story arc, setting up a clash between Batgirl and the Oracle A.I. Castellucci does a good job of efficiently setting up who and what Oracle is and quickly establishing that she has a bone to pick with Batgirl. I don’t think we will have to wait long before we see them face off.

As it stands, I have yet to find anything really compelling about Oracle as a character. It seems like the same recycled Frankenstein’s monster stuff I’ve seen elsewhere, with Oracle deciding to wage war on her creator. I hope that now that they have finished with her set up, the creators try to do something that makes this character more of a standout. Already I think there is an opportunity wasted to have Oracle, with access to the sum of human knowledge on the internet, only be able to determine that her creator is Batgirl, not Barbara.   Oracle could potentially be a massive threat to Batgirl’s identity and I think it would have been more interesting for her target to be Batgirl’s civilian identity. The Terrible Trio, who I wish would just go away at this point, would be far more interesting if they found out that Barbara was once Oracle, for instance.

Where I think this issue really shines is in the scenes featuring Batgirl/Barbara, as she picks herself up and prepares for round two against Killer Moth. I like how this story continues to establish Barbara as a “do it yourself” superhero with limited money and resources, and I liked her having to make do with a pieced together costume in this story.   As a side note, it was nice to see the return of Batgirl’s cowl.   I think that the Sean Murphy design works great when Sean Murphy is drawing it, but otherwise doesn’t really work. In fact, Sean Murphy himself has admitted the costume isn’t very good, and I hope this is the sign of Batgirl returning to a more traditional costume.

The issue also continues the slow burn of setting up a relationship between Babs and Jason Bard. It’s not a relationship I find particularly compelling to begin with, but if they are going to go there with the story, I hope they move things along and have the two actually go on a date at some point, as the dancing around each other is starting to get old. There is a lot of story potential to be mined from Babs trying to balance having a relationship while also being a superhero and I would like to see the story go there.

Carmine DiGiandomenico’s art has a scrappy quality to it that I think suits this story’s tone while still feeling polished where it needs to be, such as the great splash page of Batgirl and Killer Moth crashing through into the tech conference.

Final Thoughts: Despite no being particularly impressed with Oracle as of yet, this was a fun and fast-paced issue that I enjoyed reading and I’m interested in seeing where the story goes from here.