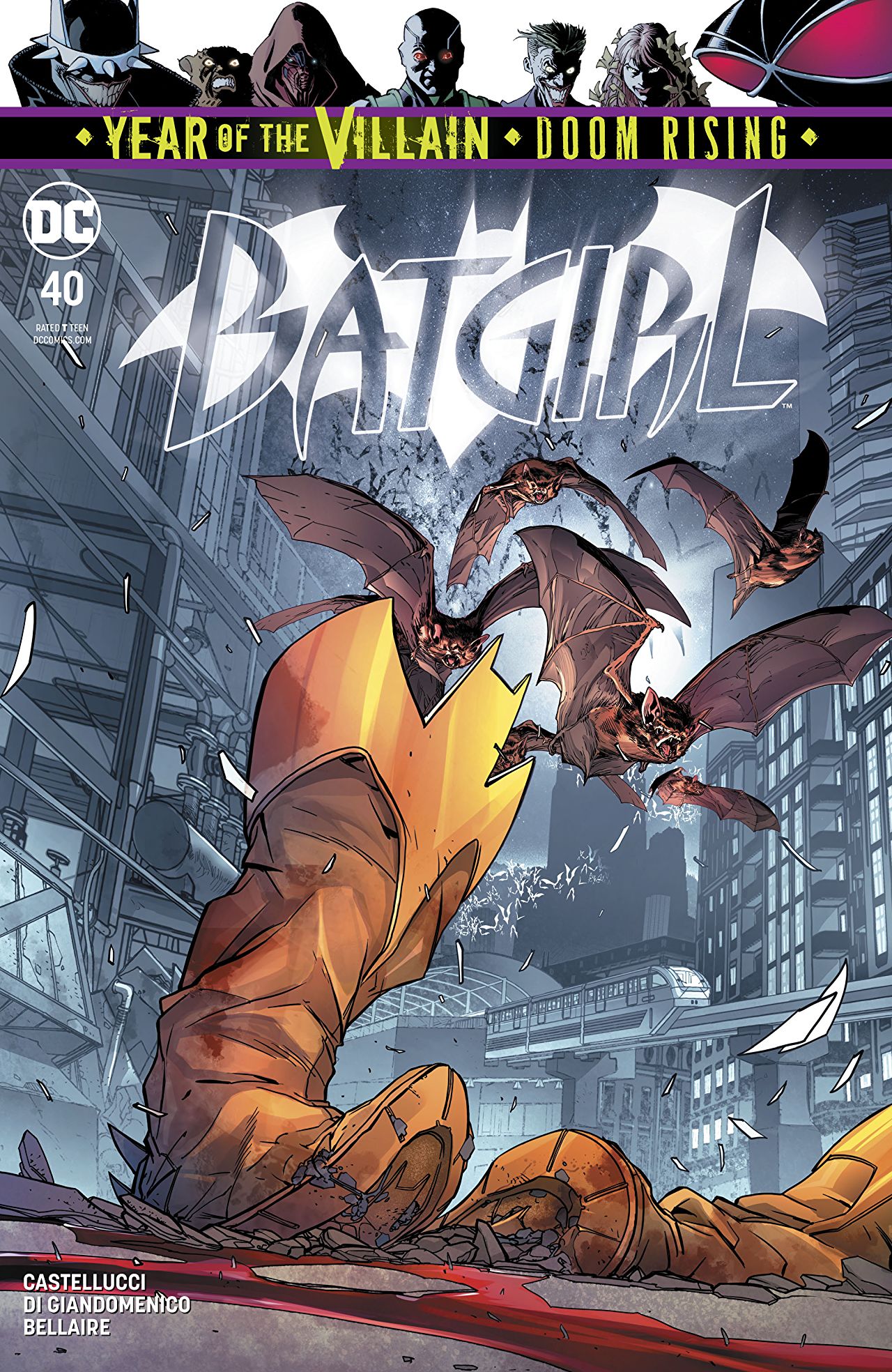 Overview: As the fires that have overrun Burnside continue to blaze, Batgirl comes face to face with Oracle.

Synopsis (spoilers ahead): Barbara watches reports of a bat-shaped inferno burning its way through Burnside and suits up to head towards the blaze, as Oracle walks through the burning streets, waiting for Batgirl to appear. As Oracle’s wiry tentacles capture some of the residents of Burnside to be used as bait for Batgirl, Frankie tries to call Barbara but can’t get a signal on her phone. Vulture explains to Oracle that they are trapped by the fire and Oracle then demonstrates its invincibility by sticking its hand into the fire to show that it cannot be destroyed. While they are distracted, Frankie makes a break for a nearby payphone.

Frankie manages to pass a message to Batgirl that a robot is looking for her, while Batgirl makes her way past the police perimeter and into Burnside. Meanwhile, on a plane to Washington, Congresswoman Alejo is informed by Jason Bard about the fires in Burnside and they speak about an anti-vigilante platform.

As Batgirl runs across and takes down Fox, Frankie goes to her apartment and digs out Barbara’s old wheelchair, which is equipped with Oracle tech. Frankie activates the chair, which signals both Oracle and Batgirl. Oracle drags Vulture along with her as Batgirl has a quick fight with Shark.

Oracle arrives at Frankie’s apartment and drives one of their tendrils into Vulture’s optic nerve, blinding Vulture but connecting her eyes to Oracle’s network posting to watch for Batgirl. Oracle attacks Frankie and takes hold of a memory stick with the Oracle core program, which she begins to download. Oracle then drags Frankie along as a hostage and then snares Batgirl as she climbs up the side of Frankie’s building to the roof. Oracle is momentarily distracted by the Hall of Doom signal in the sky, which gives Frankie the opening to knock the memory stick out of Oracle’s torso, stopping her download. The issue then ends with Batgirl cornered by Oracle at the edge of the roof and left with no other way out. She jumps, falling towards the flames below.

Analysis: The sign of any good villain plot is that it is unique to that particular hero. I think that it boils down to if you took that villain out of the story and put in another one, it would fundamentally change the story.   Take the Joker out of The Killing Joke, and you have a completely different story, for example. The problem, I think, with the introduction of Oracle in this storyline, it feels so incredibly generic and frankly, poorly executed. When you think of an all-powerful artificial intelligence, having the villain plot center around a bunch of fires doesn’t feel like it pairs very well.

What’s really frustrating about the introduction of this character is that there is potential. Having Oracle’s tendrils move through the streets snaring citizens, and taking over people’s bodies is a nightmarish threat that I think could have been put to better use in the story.   The moments of Oracle not understanding concepts such as self-preservation and having no respect for human life, feel right for this character. If this character makes it passed this storyline, those are the aspects that I would like to see played up, instead of the robot with abandonment issues story that we are getting here.

I also think that the late revelation of there being a backup copy of Oracle in Barbara’s old chair should have been more of the focal point of this whole story. This should have been a race between Batgirl and Oracle for the Oracle program.   Also, if this backup existed, what was Barbara so upset about in the previous issue when she thought her program was gone.   Did she just forget about it? Babs has an eidetic memory. It makes me feel like the writer decided to throw this element in without really thinking it through.

An element that I think does have potential is Congresswoman Alejo turning Batgirl and other vigilantes into a political scapegoat. There is a lot of story to mine from this idea, especially with Batgirl working for the Congresswoman in her day job. I just hope that it doesn’t turn Alejo into a villain for the story, as I think that there is a way to explore the politics of someone working outside the law without demonizing the anti-vigilante perspective, which is where most books go when they go down this road.

Carmine DiGiandomenico’s art is largely well done, but I did find that the end confrontation on the roof felt a little rushed and hard to follow.

Final Thoughts: There is potential here, both with Oracle as a villain and with the background politics in this issue, but the story and character issues continue to cause this storyline to stumble.